Feels like Winter is coming, cold winds from the South and West blowing in clouds of Umbrella grass AKA Fairy grass. I have a few other names for it!!! 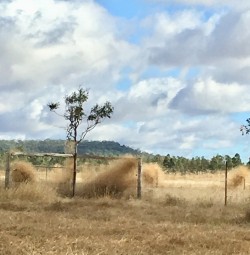 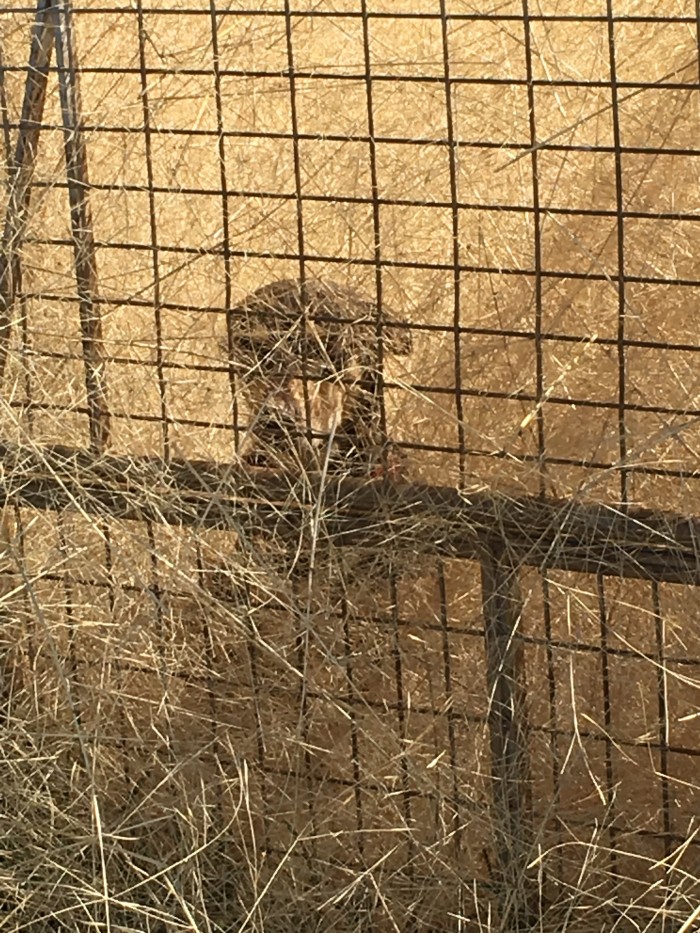 Whip wasn’t too happy, he couldn’t find his water bucket! 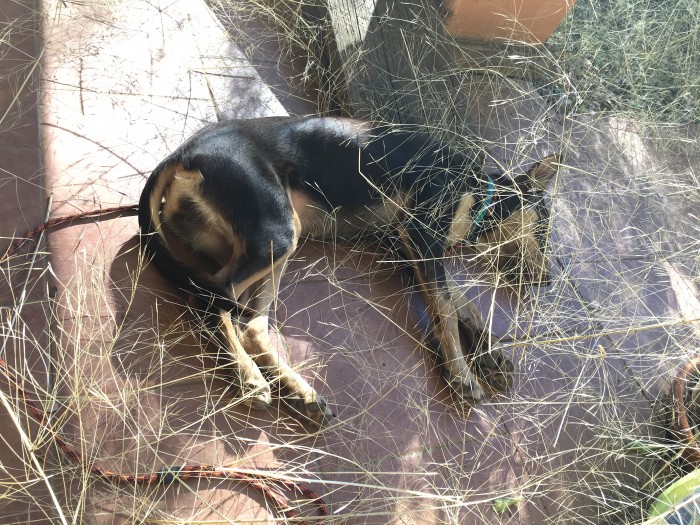 Naka tried a few different spots for a nap but couldn’t get away from it. 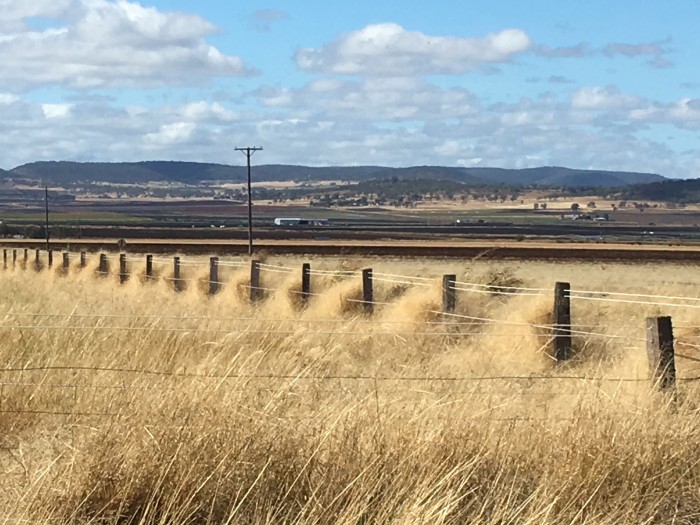 Down my road. As you can see, the country looks pretty bleak. No sorghum crops to speak of and not much winter oats either. It’s shaping up to be very similar to the last few dry winters. Not many sheep here to feed this year anyway.

Great to hear of good rains down around Dubbo and Nyngan.

The biggest item of news is the result of the CA testing which arrived by email last night. I’ll post the results below. I was fortunate to have been told about CA before I bred many dogs, and will always be grateful to the Hazlett family, Riana Kelpie Stud.

After seeing a couple of affected pups bred elsewhere I was determined to avoid it if possible. For those of you who are unfamiliar with it: although there are various types and levels, the pups I saw were very “well bred” and stylish little workers BUT they kept falling over. It was soul-destroying to watch and I can still see them in my mind’s eye. Then the breeder asked me to put them down. Something I’ll never forget.

A long time ago the Working Kelpie Council was aware that certain sires left affected pups, one dog in particular was used a lot, and some breeders who were committee members at that time avoided those lines. For much of the last 20 years I’ve been trying to dodge them too by using ‘clear’ lines as insurance, knowing that you usually need both parents to carry a recessive gene to get affected pups. I imagine many old time breeders blamed the bitch for ‘crook’ pups and continued to use the sire for breeding. No test was available until recently, and testing is still a work in progress.

In Australia CA hasn’t been a huge problem for breeders because of the large population of kelpies, but when they were exported it was a totally different demographic and cases appeared…. Kathy Christian was a keen Kelpie fan and had a terrible experience with CA which was financially and emotionally destroying. She was instrumental in getting the hunt for a test started and gave samples for the research from her dogs. We owe her a big thank you.

Well, after all that! I’m very relieved that my sires have tested clear due to good management, good luck, and the breedings done by others which have been able to rule out some dogs as carriers. Now we can test, it’s possible to mate a carrier to a clear and thus preserve the good working traits of the carrier. The down side? I doubt there is a line of dogs remaining that could be considered clear, I’d like to know if there is! The kelpie gene pool is quite small and it’s a tragedy that this was allowed to happen. I tried a sire from a suspect line recently and the pup that’s tested positive is by him.

Dear Ms Lowing,You requested immediate results for your dog DNA testing via email. We didn’t get much email from Brock’s swabs, and the CA: NUP153 test only gave us a partial result. You can send a replacement swab for us to test, or leave it – this is the rarest form of CA, and so far we have only found it in German dogs.

Test results from Friday, May 1 are as follows.

Dog DNA Results – breeding.doge results@breeding.dogph +61 410 492 005
Below is a statement by Professor Claire Wade, who oversaw the research, among others,

Below someone suggested that we “do not know how the CA gene works”. First, it is important to understand that what people label as CA is at least three and possibly four different diseases. It is extremely common for genetic testing to occur and correctly predict gene risk without the scientists fully understanding the function of the gene, as many more years of work are required to attain this and it has low practical significance for breeding. We do know that these markers are genes or close to genes that cause risk for three different disorders that are called CA by ordinary people.

People submitting samples in the research phase of the project were reasonably clear about the symptoms of the dogs described as cases, because they needed to fill out a questionnaire describing the symptoms. Some of the dogs that were labeled as unaffected in the study may have had far milder symptoms that went undetected. Here is what we understand so far:

The VMP1 variant appears to be 100% accurate in predicting risk when the laboratory test has good quality DNA extracted correctly. It works as a fully penetrant recessive disorder that we know is active in Australian Working Kelpie and Australian Working Border Collie.

This means that all animals with two positive copies of this marker will have disease.

The LINGO3 variant has very strong statistical association with risk as a Mendelian recessive but having two copies of this marker does not always produce symptoms in the dog. This is a well known phenomenon in genetics called “incomplete penetrance”. If people are honest with Dr Kao regarding the symptoms displayed by their dogs then this first round of testing will enable us to establish the exact predictive value of the test.

The NUP153 variant appears restricted to a single family of dogs in Europe. In testing so far, we have only seen one dog with this variant and this dog was affected and from Europe. In the original affected family there was one grandparent that was recorded as normal that had two copies of the variant. Otherwise it segregated according to expectation of Mendelian recessive. 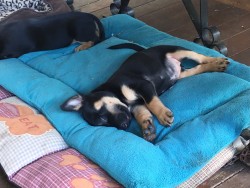 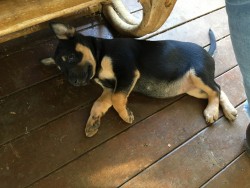 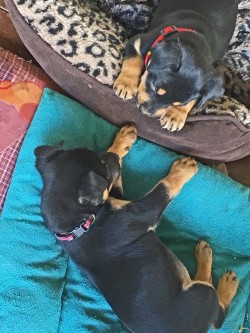 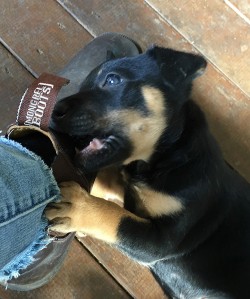 I took these photos of Gemma and her pups on a warm, lazy afternoon last week. They are very entertaining!

The Bimber pups, photos in the April post, are starting to head off to new homes. Some will be here for longer until border restrictions are eased.

The bitches look as though they’ll be starting to cycle again shortly. I just hope they spread themselves out a bit…wishful thinking, I dare say! I have been busy on Breeders’ Assistant trying to work out matings and avoid the white that comes through in some. I guess that’s a minor thing compared to CA! I am out of options for a clear line to outcross to, so I do hope Australian breeders will take advantage of the test.