Matt Bignell's team when he was working for Corrish's at Goondiwindi. Landy, Deli, Gemma, Dazza and Tilly(f)

Karmala Harvey is working for Ron Robb at Nyngan

Karmala Tilly mustered with Arthur Crumblin in the Traprock country and worked at Goondi.

Remy working cattle for Grant Hutchings at Tenterfield. She is now out at Nyngan where she will be mated to Harvey. 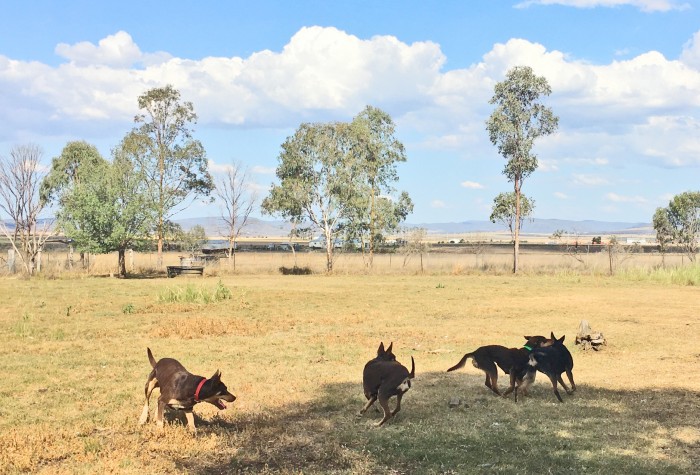 The Karmala Stud is run on a small property with only Merino stud sheep, so the dogs get little real work. It is crucial that all the bitches I breed from and the dogs they are mated to have done some hard yards in the real world, so that I have confidence in their stamina, ability and temperament under pressure.

Unfortunately these elite pups and young dogs can come to grief during this time, and I have lost some extremely good ones….so many, in fact, that I now try to get some pups from a very promising youngster before letting it go. Brock is a case in point. He sired a very nice litter to Karmala Chanel, born in Dec. 2014 and then stayed here over summer, which is a very risky time in Queensland because of snakes. He was mated to Karmala Lily in June 2015 and then got some experience on cattle.  I made sure he was assessed on cattle prior to the first mating. In spring 2016 he went out to Trangie but it was so wet that work was limited.

Because it is difficult to keep too many Kelpies under these conditions I tend to run on bitch pups and try to keep tabs on my favourite dog pups after they are sold; if they turn out to be outstanding workers I could be interested in using one as a sire later on. Generally, though, I tend to use sires that are doing…or have done…difficult work in challenging country where natural ability is needed. The bitches go out to work between litters, an ideal situation if they are well cared for, and since Derek and Emma Zeimer have been taking both youngsters and older girls for me there have been less losses. 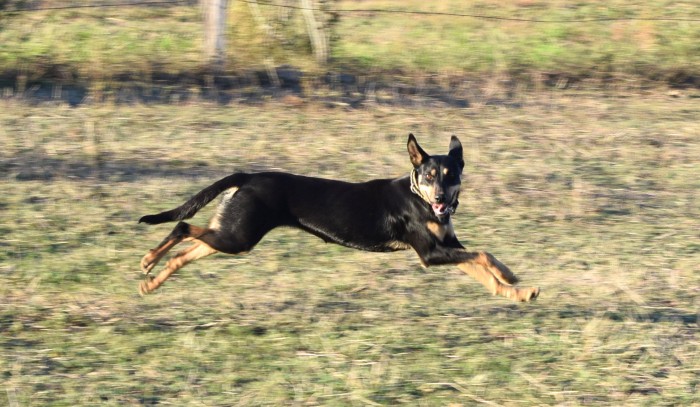 I like to sell pups between 10 and 12 weeks of age, and decide myself which pups are best suited to their future owners and the work required. This works very well until people demand certain colours! The majority of my pups are black and tan, so there is a higher chance of getting the most suitable pup for your job in that colour. I sometimes find there is a black/tan in a litter far more suitable for the job that one of the specified colour which the buyer insists on.  Black/tan kelpies seem to be easier to keep looking really good in the coat; lighter reds can often go ‘rusty’ despite a top food regime. There are associated problems with some blue and fawn coats, so I usually avoid keeping bitches of those colours. There are plenty of colours in the lines I am using, so creams and blues do turn up quite often. 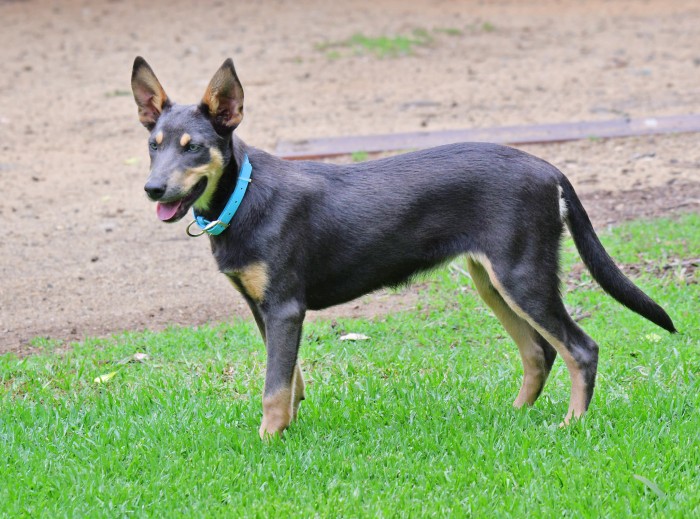 The dogs I breed come from talented natural workers, they have a strong desire to shepherd stock and are natural heading dogs. This can annoy some owners who like to keep total control and have their dogs beside them more, driving from behind. It is a lot easier to teach a heading dog to come back off the lead than to ask a “tailly” dog to block up a mob in an emergency situation, in my opinion. I think there is also a trend to breed more obedient, submissive dogs that will accept command easily (like Border Collies), making them easier to trial. This can lead to a dog simply heading home when life gets too hard, as they don’t have enough will to work in hard conditions bred into them. There’s nothing more annoying.

There is a demand for Working Kelpies for pet homes which appears to be growing, and I am disappointed that some Working Kelpies are being openly promoted as suitable for pets. I don’t think the way a dog behaves when taken to a cafe should be a selling point for his pups. My point is: if dogs are selected for certain traits above others, they become the dominant ones and in my humble opinion Working Kelpies should be bred for working ability, soundness and temperament. Maybe the theory some have put forward, that of outcrossing  to dingoes to improve the hardiness of the breed, has something to do with Working Kelpies displaying nervous behaviour in urban conditions. On the other hand, and more probably, all dogs bred for generations in rural conditions would be freaked out by living in confined quarters in the city. 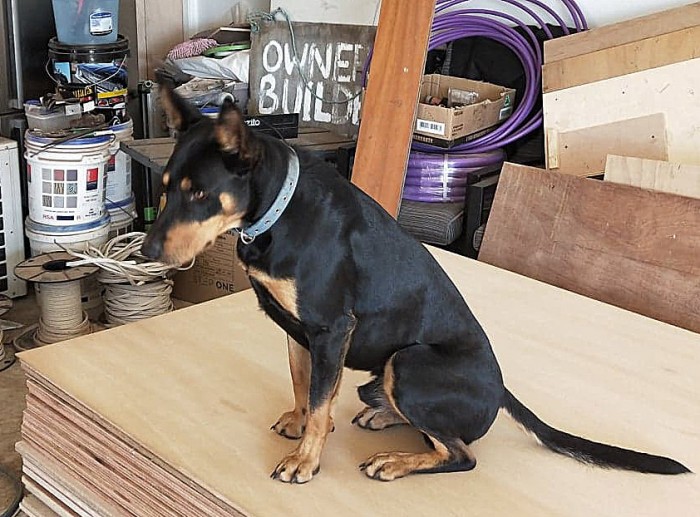 If I decided to promote my dogs as pets I would immediately start breeding a different type of dog: I would choose very calm dogs and those that had less desire to work. Using my present lines it would take me forever to breed the type I feel would be suited to living indoors and being companion animals, and they would certainly be much inferior workers. An outcross to a Labrador would hurry things up!  Seriously, there are already many wonderful breeds that have adapted over centuries to make fantastic companions. Or even better, a nice crossbred pup who needs a good home…crossbreds are often less highly strung than pedigreed dogs, have less health problems, and make better pets for children. Keeping a Working Kelpie in a small suburban yard is as silly as keeping a Maremma as a pet in town. The Maremma was bred to warn of danger by barking, many are totally freaked out by town life and people complain that they bark! 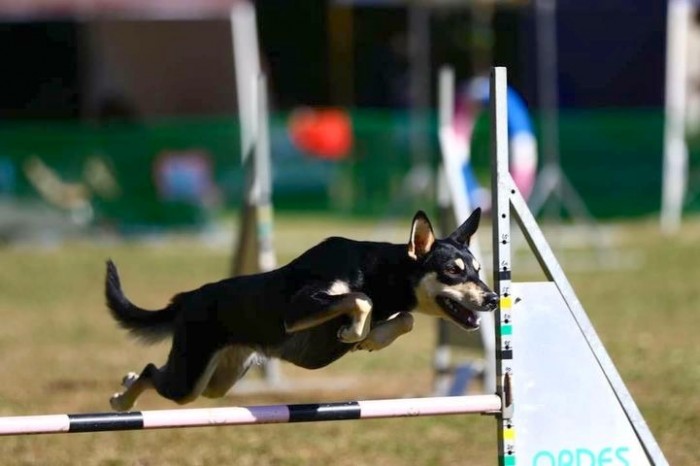 I know some Kelpies have a wonderful life in ‘pet’ homes, but only if the owners understand the enormous amount of time and energy they require when young. I have been convinced by a few people that they will manage well, and these include: previous kelpie owners, long distance runners, horse riders, bike riders, those who live near a beach….in fact anyone with an unusually active lifestyle.

I field quite a few phone calls from people in town with frustrated kelpies they have bought elsewhere; the average family with both partners working simply hasn’t the time or energy left over after a day at work to cope with a very active young dog. People who say their kelpie will get walked twice a day have no concept of the exercise needed by a working kelpie bred to work hard all day.  Apparently Kelpies are one of the dominant breeds found in pounds in Australia, a result of the dogs’ frustration and their owners’ poor choice of breed. I also found a website where a lady is actively breeding kelpies ‘that don’t work’ for pets. She’s using some sires registered with the WKC, which is a bit of a worry…. 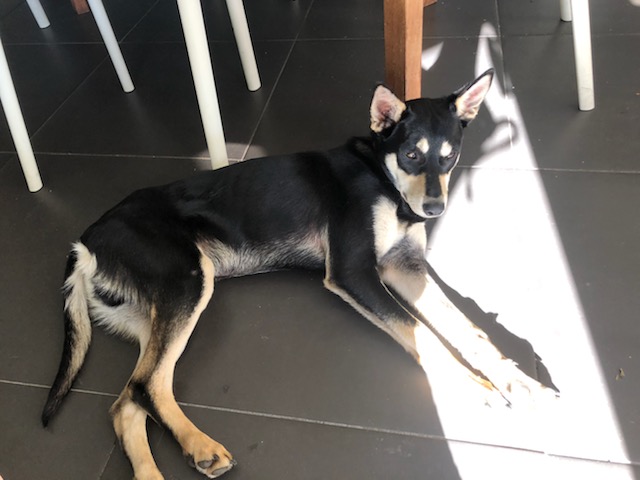