Arthur penning with Swaggy at Karara

Tubbo filling the race for Gary at Skipton.

SINCE WRITING THIS PAGE A NEW DVD HAS BEEN  MADE. “The Kelpie Dog. Training and Selecting” available at  https://www.kelpiehistory.com/products

Three wise men of Kelpie renown are featured, Gordy McMaster, John Gedye, and young gun Joe Spicer! The segment with Joe is an excellent help for those wanting to start a pup from scratch, most of my hints here are much better shown on the video. The best training help I’ve seen.

I must make it clear right here that I don’t TRAIN pups any more… I try to select the right ones, give them a few looks at sheep to see their work style, and hand them over to an expert trainer if they look like being ‘Keepers’. I could get a pup going well in a year when I did regular stock work….and I’m not too bad at picking ones I think will make the grade… after a lot of experience. 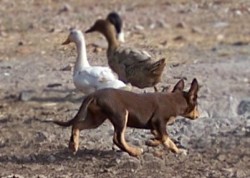 One of the best training guides I’ve seen was given to me by John Gedye when I bought my first pup. His advice was brilliant and simple to follow, and scattered with gems of wisdom eg. YOU CAN’T TRAIN A DOG TO WORK SHEEP, HE MUST BE BORN WITH THE VITAL IMPRINT THAT WILL DEVELOP INTO A BURNING DESIRE TO WORK STOCK NATURALLY.  Another: ‘A pup must be humanised….talk to it…feed it well…keep it warm, and near the house… Training can start from 4 weeks but there is no hurry. You have 3 years to instil basic commands.’

The two criteria I use when selecting pups early on are temperament and breeding, I have confidence that they will work because only a few pups I’ve sold have failed to start well. In most cases  this was because the pup had not received enough affection/praise/positive affirmation of its actions. In the remaining few it was because the pup was ‘stopped’ by too many commands before it had really ‘started’! 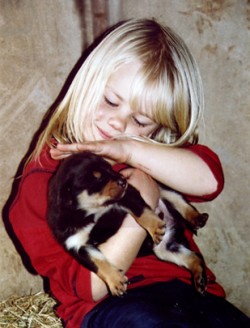 Correcting a pup severely during its early experiences can be disastrous with sensitive pups; if it does silly things like trying to ‘taste’ these odd looking woollies, protect the sheep by all means but keep your voice calm and encouraging with lots of…. “good pup!”

These pups are quite sensitive/intelligent and need to build up confidence, some more than others of course. It seems to be a general rule of thumb that the wider working, clever mustering dogs are on average a bit more sensitive than full on yard dogs. I try to avoid breeding ‘nervy’ pups, but unless a certain amount of sensitivity/common sense is retained you finish up with hard headed, defiant, arrogant dogs that are a pain to train and work. 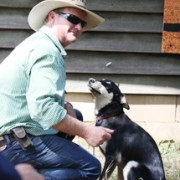 David Hart during a Stock Handling clinic at Oakwood.

Pups should be handled well (used to being tipped upside down, etc. and toes cut, taught manners) from an early age and become used to a collar and being tied up. Some people consider tying up a pup is cruel, but it’s much better to keep your pup alive and prevent it from being run over! Of course it should be housed in a raised run when young, with a wooden floor. Pups are experts at self destruction. If your pup isn’t with you it should be contained in a safe place so that it can grow up to live a long and useful life.

I never pat a pup unless it sits, even when very young. You will teach a pup to sit and come much faster if you use treats for starters, dried liver bits are great, but empty your pockets before your pants go into the washing! I have made a point of doing this consistently with my last litters and find the response is surprising, much quicker than any other way I’ve tried. After the pup catches on, the treats can be given randomly and ample vocal praise given as a reward. Here is some advice from Marina Angel Smith who puts it much better On her Jessarene Training and Behaviour site:

*********You might ask, “Why learn Behaviour and Training? Wouldn’t it be easier to just train and get it over with?”
The answer is no, if you learn behavior you are going to avoid your dog or pup developing behaviour problems rather than try to “fix” them and if you are training with behaviour in mind you are working from the point of view of your dog rather than a human perspective where you just expect your dog to understand it and they see you as not much fun to live with.
Once you start punishing a dog your recall goes out the window and you both lose trust. (my emphasis)
Sure dogs will avoid a negative stimulus IF your timing is perfect and your dog doesn’t see you as the one dishing it out but if you learn dog behaviour plus operant conditioning then you are seen as a trustworthy leader and fun to live with.
A dog will do twice as much for you if it’s eager to do it because of a positive set of circumstances is associated with that behavior and if conditioned properly it becomes a natural reflex rather than stop, think and react. You need to be the highest value reward rather than the alternative choice.
A good example is a distracted dog not coming when called because the distraction is the higher value reward and the dog is not yet conditioned to come to you as a natural reflex.
Until next time be fair and be consistent.******** 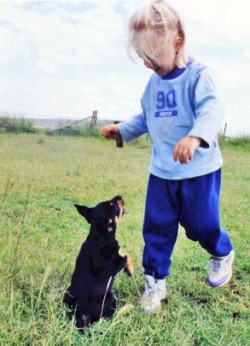 It should be remembered that all pups are different, just like children, and develop in their own time.

I repeat: *They should be allowed build up confidence working before you try to stop them, no orders should be given at this stage except COME when you finish!* Tell them “good dog” liberally when they’re doing the right thing. Of course a small amount of supervision is needed to stop any silly puppy stuff getting out of hand, but dramatic action with grass rakes or poly can switch a sensitive pup off completely.

If enough thought is put into a pup’s first introduction to sheep most problems can be avoided. It’s when you’re taking a mob past the pup yard and wonder if your pup’s working yet…and let it out…that things get out of hand and what seemed like a ‘good idea at the time’ turns into a screaming match. Never yell at pups, it’s a total waste of energy! Catch it quietly, put it away, and go and have a cuppa and cool down. NEVER EVER punish a pup for coming and being caught! This sounds idiotic I know, but I’ve seen it happen too many times when people ‘do their block’.

A better idea is small paddock or big yard, a quiet old dog to keep a few sheep together, and a handy corner where the pup and dog can hold the sheep to you when you’re ready to stop (walk forward through the sheep and block the pup). Just keep the pup from crossing between you and the sheep and watch him ‘catch on’; there’s nothing better than seeing a pup working well first time on stock. I find my pups don’t like a round yard as they can’t do what they instinctively want to do…get out around their sheep and block up. Ideally pups should be shown sheep for a few minutes every few weeks to help the work instinct kick in. Personally I usually leave them to about 5 months when they are fast enough to head sheep. They see enough sheep and chooks around the back yard to get them keen to work. 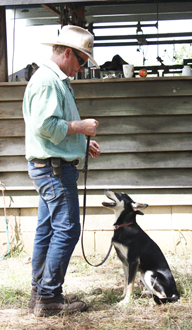 Once the pup is keen to work and old enough, start some balancing work; let it bring the sheep to you, block it each side to stop it coming between you and the sheep. Their natural instinct is to bring the ‘prey’ to the Pack Leader to be killed….going back to primitive dogs/wolves. To get a pup started it’s best to work with this natural instinct to bring stock to you, not drive them away. Later you can call it back to you along the side of the mob and teach it to drive, but that’s down the track.

My dogs are bred from natural heading dogs and it is against every instinct for them to drive stock away from you; some lines have had this bred out to some degree, and they can be easier pups to work…but if you want a dog to block the head of a mob firmly and it only goes halfway up the wing(making the stock move further in the wrong direction!) and comes back….that’s when you appreciate the one that was harder to handle as a pup. You need to have total confidence when you send your dog that it will finish up in the right place, because often there’s poor visibility in difficult country and it’s impossible to give commands.

I encourage pup buyers to attend a Blackdog Stock Handling Clinic if possible, with Sean Barrett. They are great fun and most informative. David Hart also takes clinics.

As in any business, and even more importantly in animal breeding, feedback is essential for success. It is only by learning the outcome of particular matings that I can assess results and plan future matings. One of the joys of breeding Kelpies is the quicker turn over of generations, compared to Merinos, and the ability to make faster progress if correct decisions are made.
I really appreciate the updates on pups I have sold, both good and bad. Sometimes I feel I’m only hearing the good news, and remind buyers of pups that they are guaranteed to be useful workers…provided they are well cared for and given the right opportunities. By breeding nice looking, good natured dogs that also have a very strong ‘work ethic’ I find I have virtually no complaints. 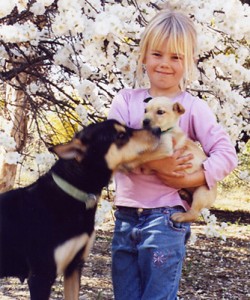