Shearing at Karrawarra. Tony Parsons with the late Godfrey Schnitzerling and Rip.

The late Arthur Hazlett who founded the Riana Kelpie Stud with weaners by Karmala rams.

Riana Bronte at Riana; she was a litter sister to Delta 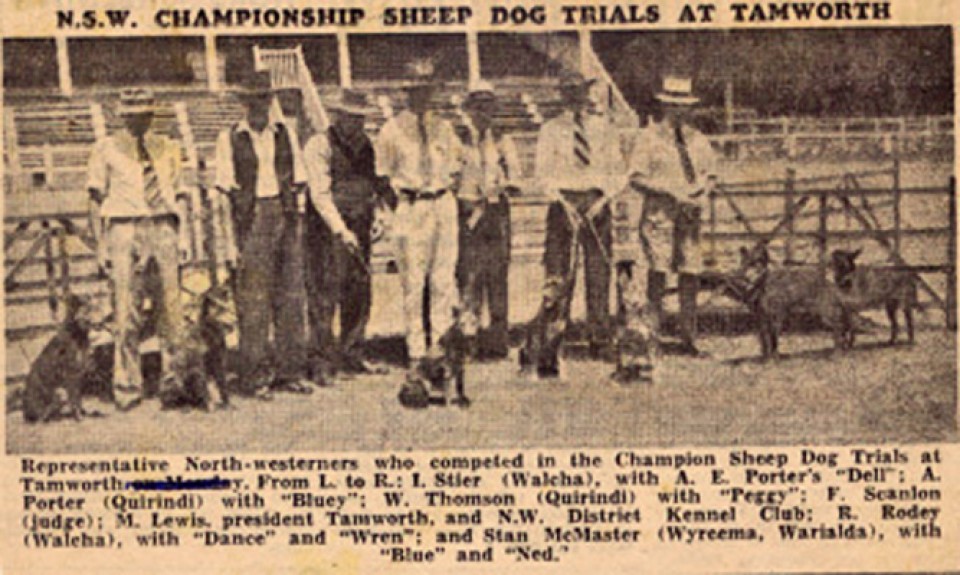 I have accessed old Kelpie families through the Karrawarra and Riana studs and I am very grateful for the help I have received from these experienced stud masters. Tony Parsons (Karrawarra) was responsible for seeking out and preserving Kelpie bloodlines after the fiasco of two World Wars, during which many ‘studs’ disappeared. His books on the Working Kelpie are an invaluable record of these dogs and are collectively known as ‘The Kelpie Bible’. Tony has always selected dogs with eye, style and distance. More recently he has published ‘Kelpie’ and I helped him sort through his photos for the publisher.  I still have a lot of these on my computer and Tony kindly gave me the go ahead to use them in the Gallery “From the Past”. As I update this(11/21) Kelpie has been reprinted by Penguin. Pat Murphy now breeds the Karrawarra dogs with the blessing of the founder. He has a property near Baan Baa, NSW.

The late Arthur Hazlett (Riana) founded his stud on Karrawarra kelpies and was one of the few Kelpie breeders of recent years who finessed the fine art of line breeding. Outside dogs were rarely introduced, and as a result his dogs were defined in type and prepotent. The old Riana dogs retained the stock minding ability that was required by all drovers; they were bred for many years in very tough country and selected for their brains and ability. The Glenville dogs bred by Bert Bromham had a big influence at Riana.

Frank Scanlon was one of the most influential working Kelpie breeders in the history of the breed, and was held in the highest regard at both Karrawarra and Riana. The pedigrees of the dogs in both studs carry many Scanlon prefixes. I have developed the same admiration for this legendary character since hearing John Gedye singing his praises in the 1980’s, and also reading about his achievements, so was delighted to come across a couple of old dogs that trace back quite recently to those lines(see below).

It is the relentless culling by these old studmasters, and their singleminded search for their ideal/perfect dog, that has improved the breed over the years. No breeder of stock will achieve this unless they have a very clear mental picture of exactly what they want to breed…. and pursue their aim relentlessly. I don’t mean by ‘perfect’ a dog that can do everything perfectly, rather a type of dog that particular stud master prefers: a dog that suits his needs, his country and his stock. As in every aspect of life, each of us has our own perception of what “ideal” means.

In the last few decades, with the increasing use of bikes for mustering, some old kelpie traits are starting to disappear. Many dogs are now used mainly for yard work, and backing, barking, full-on kelpies are in the majority. I prefer an all-round dog that retains its heading instinct, has some eye on a few, and is capable of mustering difficult country. With this in mind, I have sought sires with bloodlines that have been proven in hard conditions where brains and stamina are essential. With the decline of the Merino in Queensland I have found that most clients need a dog that can work cattle as well as sheep, and that is my aim.

I noticed that a recent stud dispersal labelled dogs with similar breeding to Karmala dogs as Heritage Kelpies; they are our heritage from these old breeders and we should value their legacy and strive to maintain and improve it. I have tried to improve the strength of my original lines by the judicious use of related outcrosses to increase strength for cattle work. Breeding “best to best” doesn’t necessarily produce world beaters, and I am really happy with the consistent type of worker coming through the stud these days. ‘Type to type’ is more successful, and if the IB% can be around 10- 15% that’s good but no guarantee of an even litter. The best litters come from two dogs bred for the same qualities over generations.