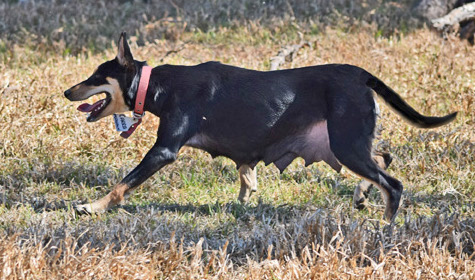 ‘Cara is a very nice young bitch who came back to me as a swap for Lara. I was keen to get a bitch by Marina Angel-Smith’s Riana Cash II and hoped Cara would make the grade as a stud bitch. She has certainly done that. After spending time with Arthur Crumblin being started on sheep, she went to Rodney Garrett for experience on cattle and goats. Rodney’s pretty fussy about his dogs, and when he asked to mate her to his very good young dog, Halsted’s Beezneez, I decided that she must have made the grade. Cara reared a nice litter to Beez and Rodney returned her with a bitch pup, Tikka. Both are now back with Marina, who has moved to Texas,Q., and are working her goats and also doing some cattle work.

Cara was mated to Larkings’ Wilson earlier in 2016 and had a good litter of eight, sadly only one bitch pup! There are some videos of Cara on Youtube. She had two litters to Karmala Landy, who also works for Marina, then got an infection which put her out of action for a time. Marina got her right again and she whelped again to Landy in July 2019. This particular mating is leaving some good strong cattle workers and some very fast, athletic types. I bought K. Classic back this year and she’s incredibly fast; working for a friend, she was in a team that mustered 1500 feral goats that no-one had previously been able to yard.