Cherry is a beautiful young bitch who is full of work; I thought she might be a bit too ‘full on’ when she started working (like quite a lot of Chance’s pups) but she is capable of very classy work when she settles down. I was convinced by a couple of experienced dogmen  that this type of worker usually proves to be of great value in the long term, and that a stud needs to keep a few bitches like Cherry.

Arthur Crumblin started her on sheep and then John Clothier gave her some cattle work; she is certainly not the type to settle down in an environment where she doesn’t get much work. When she came back to me she worked the other dogs in the run too hard, so I asked Andrew Ardis to take her.

This was the second mating of Brandy to Chance, the blind son of Karmala Clyde. Some of the pups have really taken to yard work. K. Changi is a litter brother.

I tried to mate Cherry to Tracker Rock in 2017 without luck. I had an enquiry from a breeder in Sth Africa who said many kelpies there were losing their instinct to work, and I decided Cherry was the right bitch to fix that problem! She was exported to South Africa in pup to Wills in 2018, whelped 8 pups over there, and they are going very well. 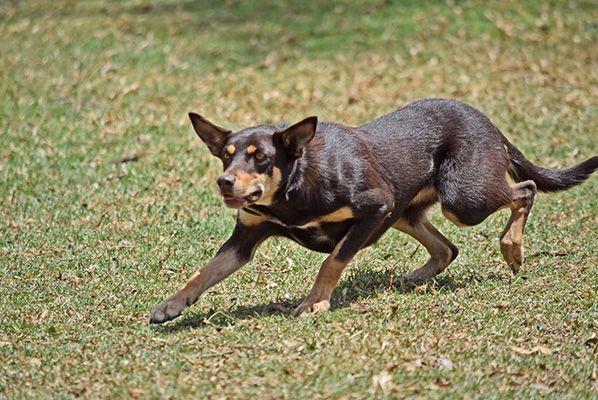