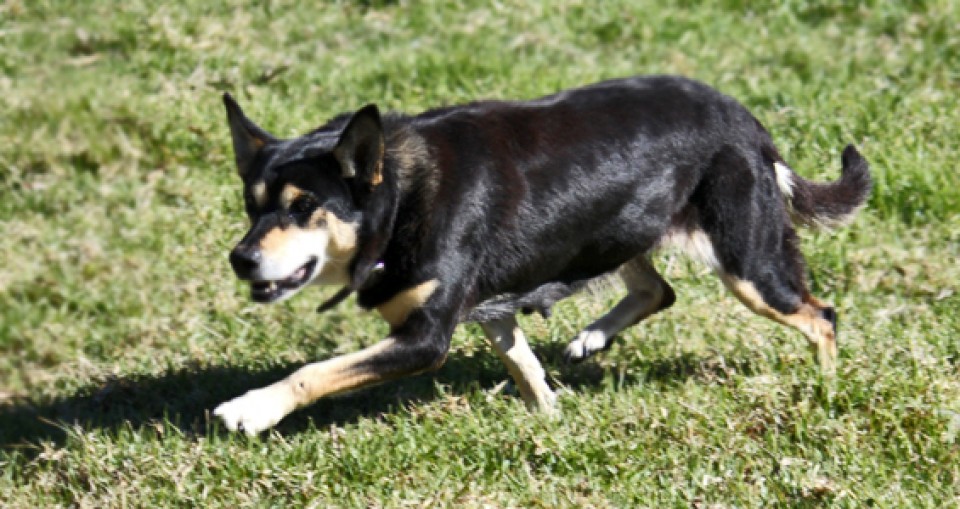 Gift shortly before she died, a lovely bitch 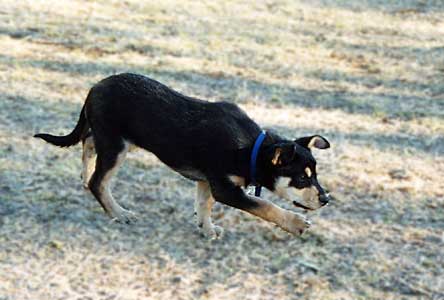 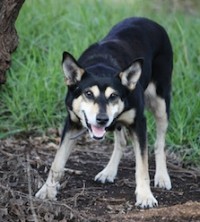 Karrawarra Gift had a great temperament, she was a lovely bitch to handle and a bit of a character with the most engaging grin and a habit of ‘talking’ to you, especially around feed time.

Gift’s work was very classy with a great ‘break out’; she had natural strength and walk up combined with a calm temperament. As a pup Gift appeared on Burke’s Back Yard with her sire Karrawarra Rip when Don ‘road tested’ the Working Kelpie. The video is still on Youtube.

Gift worked with James Dudley contract mustering. She had an excellent cast and wasn’t tied up with too much eye. Also worked cattle, and barked on command. An easy bitch to work, very natural and correct. James mated her to Boanong Buster and I brought one of the pups(B.Electric, bought by Glendon stud) back to Queensland when Gift came home.

Gift reared a litter of 7 by Karmala Spike in 2006. Bindi went to Patrick Stubbe in Belgium. Gidgee flew to the UK in Jan.08 to Tracy Huxtable in pup to Riana Glide. Both these bitches have developed into useful types.

A litter of 4 by Riana Glide has proven to be well above average and this mating was been repeated(b.2/08) ; the second mating resulted in 7 pups and proved an outstanding litter.

In July 2010 Gift had a litter by R.Glide delivered by Cesarean and it was discovered that internal damage caused by cattle work had made this necessary and probably caused the previous 2 small litters. Gemma is from this litter and joins Tilly and Lily as Gift’s legacy to the stud.

I decided to retire Gift from breeding and she had been with Delcie McCoy near Tenterfield until their property was sold in 2013. Gift came home for a spell until they settled on a new place, but sadly she died in Oct. 2013 very peacefully.

Gift took after her dam Karrawarra Gemma in appearance, and many of her pups also show an uncanny resemblance to their grand dam. I had originally picked another pup from the litter when I went to pick up Gift as a 6 week old pup, but Tony Parsons suggested I swap to Gift. When questioned, he replied that he believed the pup who most resembled her mother would also retain her working traits to the greatest degree…whether that is true or not, these 4 generations have certainly confirmed my belief in the influence of the bitch in breeding.

A lovely bit of film of Gift working with her sire as a young pup can be seen on Don Burke’s Road Test of the Working Kelpie on Youtube.