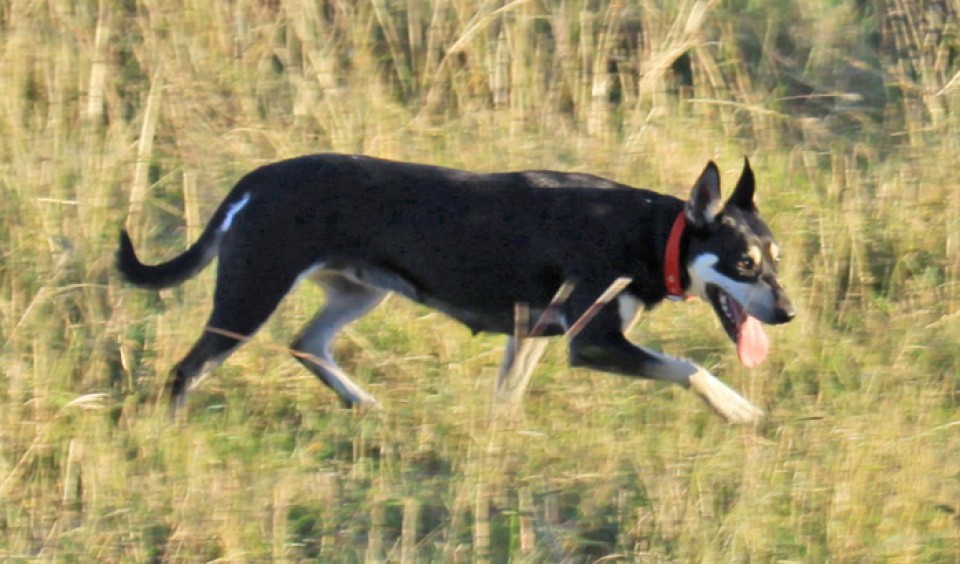 Peg playing with Georgie as a pup

As a young bitch at 9 months

Peg has a wonderful temperament, a very loyal nature, is a nice leggy type and her work is also hard to fault. She will cast out well and gather her stock, gives them a bit of room, and will ease off when they settle. She is prepared to come in and bark and push up in the yards and is a very active, agile bitch.
She is also rather bossy with the other dogs, taking after her mother, and had a bit of random bite on sheep but worked cattle well when with Matt Bignell at Goondiwindi. Peg then went working for Tony Hamilton who is a shearing contractor around Goondiwindi and on her return had stopped pulling out little bits of wool and instead was just giving hocks a bit of a pinch, a great improvement. Shows what real work can do to stop silly things that they do when they get bored; she was mated to Larking’s Wilson(Scanlon’s DomxBaldwin’s Polly) in 2014 and the pups look great.

After rearing a good litter to Chopper I lent Peg to a friend and client who has K.Martini. Sadly she died in an accident during crutching. She will continue to have influence in the stud through daughters Poppy(xChopper) and Wings( xWilson) and hopefully by promising young dog pup Polo, Pop’s brother.