A nice dog with beautiful footwork and lateral movement. Has the natural distance off his stock that is typical of Riana bred dogs.

Clyde was a dog who needed a lot of work when young, which was why I let him go. He was sold by Adam Wheeler to Peter Whiteman who was managing a large property at Quilpie. Clyde impressed with his work in these wide open spaces, in fact the term used to describe him was ‘awesome’!
After Peter’s tragic death in a plane crash Clyde went to one of his former jackeroos, Brad Cavanagh, now managing a big sheep property near Merriwa.

I have a lovely son of Clyde’s called Benalee Chance out of K.Lyndy. Sadly he tried to strangle himself with frayed carpet thread from his bedding when 7 months old; I had worked him the day before for two Swedish visitors(who were very impressed) and it was his impatience to be let out while I was being hospitable cooking their breakfast that led to the disaster. $900 (to the vet) later he is fit and well but blind; the way he is managing is incredible, and visitors don’t believe me when I say he can’t see. The little I saw of him working convinced me to try a bitch to him; he was stronger on his stock than Clyde and has the same light-footed action. Chance has proven himself as a sire and can be found under “Sires”.

Clyde has proven a useful sire and has been used by Peter Austin(Kirkaldy), Pat Murphy(Karrawarra) and Bill Scott(Stockman’s) that I know of. Peter has a nice cream dog by him from Karrwarra Nessie.
I had hoped to get a bitch back from a Clyde daughter K. Qing(Pride) by Stewart Oates’ dog Karmala Rook but she followed the school boat during the floods and disappeared. 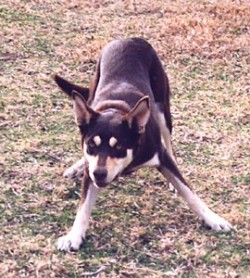 Karmala Clyde and his daughter out of Riana Quill, K. Qing(aka Pride). 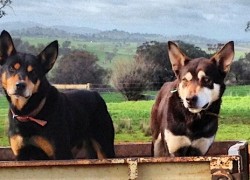 Migaloo Maverick and Karmala Clyde in 2013, photo from Brad Cavanagh.