Harvey was an outstanding pup and had the potential to make a good three sheep dog when he matured. I am reluctant to keep many sires here where they get little work, and also felt he needed stronger bitches than mine were at that time as I was selling so many pups for cattle work. I sold him to an old client, Ron Robb, who already had three other dogs from me and worked big mobs on Gerar Station  near Nyngan.

I always had in mind to mate a bitch to him, and later sent Remy out after she was injured, thinking it would be a nice mating. Dave Motley works on the same property and was so impressed with Remy’s work that he suggested Ron mate her to his good young dog Motley’s Russell, whom I’d seen work very well at the National Kelpie Trial at Allora. Remy had two pups to that mating, the surviving dog is K.Skip who has since been used as a sire here.

Remy whelped six pups to Harvey in Oct. ’15, 5 bitches, 1 dog. After I lost the very nice blue/tan bitch pup I kept from that litter, Rev, I asked Ron to repeat the mating in 2017. A bitch of this breeding, K.Ronnie, is a very good brood bitch for Chris Leatham in Victoria. He has mated a daughter to Karmala Warrigal(Wills x Gemma) and she had a big litter in Nov.’19, I hope to swap a bitch pup with Chris.

In June 2017 I drove out to collect Mocha, who had been mated to Changi, and caught up with Harvey again. He developed into a lovely dog with very fast cover and brilliant footwork. Ron recently turned down $10K for him. Dogs that can muster feral goats are making good money. Harvey came back here in spring 2019 to mate a few bitches. Ron’s doing a lot less stock work now with the prolonged drought so it seemed a good time. I have more bitches to suit Harvey now, and Ron and I both want a couple by him.

Harvey was mated to K.Perks(Wills x Poppy) in Nov. 19

I doubt you’d find a better natured dog, he always has a grin from ear to ear! 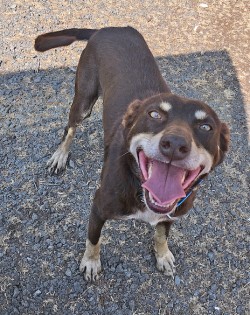 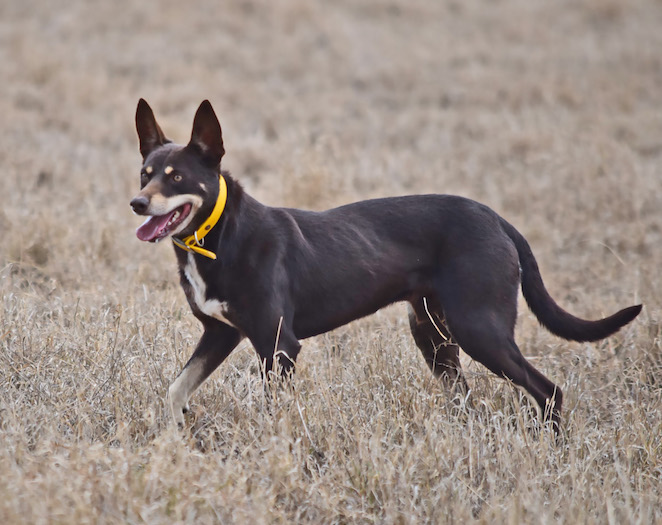 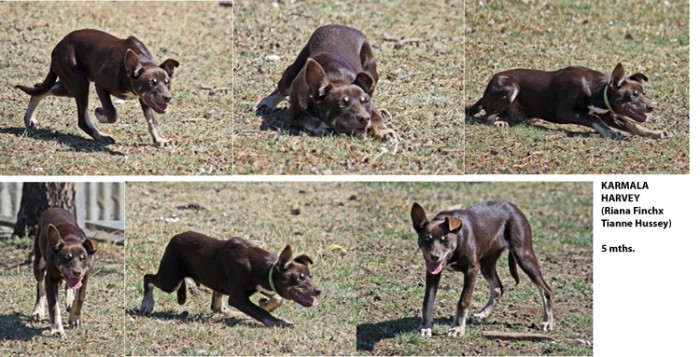 Harvey aged 8 mths. There are a couple of poor quality videos of him working on youtube for Arthur Crumblin.