Landy working things out as a big pup

This breeding has proved to be the ultimate in combining Karrawarra and Riana bloodlines!

Landy was only the third dog I have bred here to be used in the stud. He has developed into a very handy all rounder. The image of his sire, Tracker Gibbs, Landy will back and bark in the yards/shed, is very useful outside, and works cattle with purpose and calmness. Matt Bignell used Landy for a couple of years at Goondiwindi, he then went to WA where Marina Angel Smith was running a Dorper stud. She later moved to Texas, Qld. and Landy has proved himself indispensable working her goats there. He is relatively close to Nobby and I have been able to use him as a sire.

At this time, 2019, Landy would be one of the most influential sires used in the stud. His pups have a great work ethic and rock solid temperaments. I am finding the combination of Landy over my Wills bitches exceptional.

Landy has been used as a sire by Lynnton Martin, Tynndyl Kelpie Stud, where he impressed with his temperament and work.

Wayne Squire from Tingha has also mated a bitch to him and is more than happy with the pups(Sept.‘13)

Landy has been mated to Riana Trixie(twice) and Karmala Cadelle. Brandy had 2 pups to him, 2014 and since then the quality of his pups has led to many more bitches being mated to him.

Grant Hutchings mated Apex Soda to Landy in 2016 and was more than happy with the result, he repeated the mating in 2017 . A dog from the first mating, Eventine Buckle, is going very well for Andrew Martin. 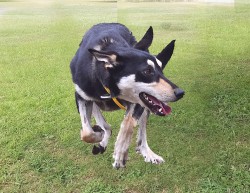 Marina Angel-Smith had Landy at Manjimup, WA, where he helped handle her Dorpers with good effect. He is now working goats for Marina in Queensland at Texas. 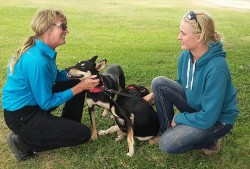 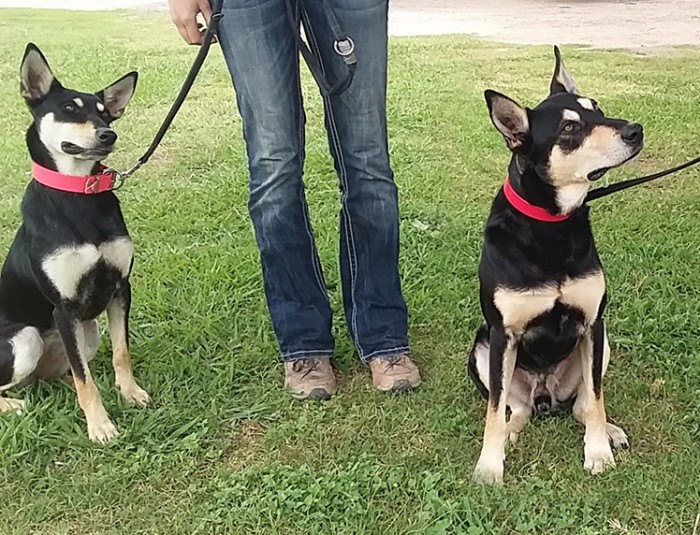 Landy and his daughter from Cara, Karmala Click. He is a dominant sire leaving nice leggy types.

With the disappearance of his sire when mustering, Landy will keep Gibbs’ memory alive. (Landy was named after John Landy who was the first Australian to break 4 minutes for the mile. A lot of you are too young to remember!)

There is a poor quality video on Youtube taken when Landy was 7 months old working with no commands(also some others). He impressed me by the way he watched the effect his work had on the mob. Not many young kelpies watch the result of their previous move before deciding on the next one; other dogs I’ve seen doing this are Paddy’s Jedda and Karana Duke. 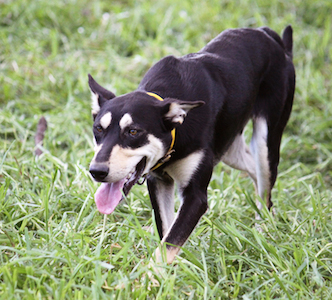 Karmala Landy(right) working cattle for the first time like an old hand. Peggysue(left) is a natural on cattle too.

Karmala Landy filling my shed with stud ewes; Landy hadn’t worked in my yards previously but did an efficient job with Matt.