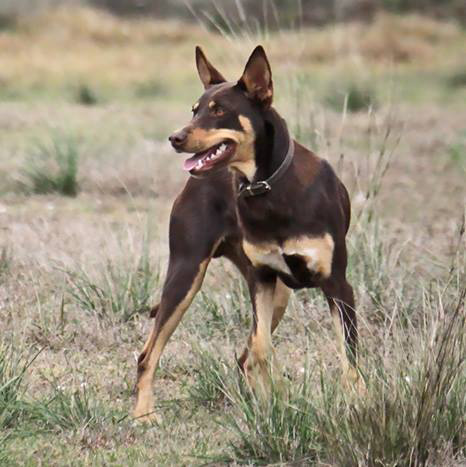 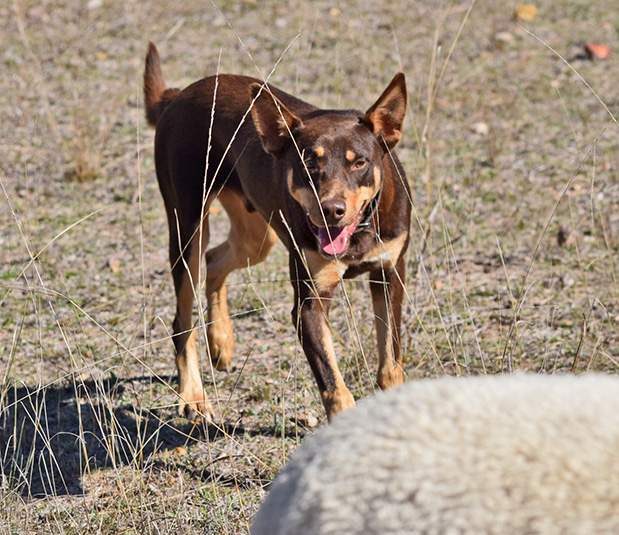 Wills is probably the best dog I’ve bred to date and is shaping up to be one of the most influential. He has tremendous natural ability and innate stock sense, as can be seen in these videos of him working with Arthur Crumblin. Arthur rates him right up there with the best Kelpies he’s worked with over the last fifty years or so. Bred from an outcross mating of two dogs of very similar working styles.

Wills and his half sister Wings(WilsonxPeggysue) both drop into a lovely relaxed trot when working, a great energy saver and an indication of a cool head….a trait they’ve inherited from their sire. The only negative I’ve found when breeding with Wills are the white markings on some pups. After some trial and error it’s pretty clear that this happens when Glenville Prince and Glenville Swannee lead the Homozygosity table, so easy to avoid if I remember to check up!

This Suffolk ram had arrived the day before and gave Wills something to think about. Arthur remarked on how he stretches his head and shoulders up to look taller when the ram confronts him…it works! The day before an old X bred ewe had bashed Wills against a tree, but he ignored her and didn’t take his eyes off the mob…

I’m very reluctant to let dogs go out working in summer so have kept Wills here and mated him to Quiz and Win as insurance(late 2016). Quiz reared one pup, Mundine, who’s shaping up to be one to watch. Win missed, but Heli has a nice litter of 5 by Wills(b.4/17). In May 2017 I sent Wills up to Emma and Derek Zeimer for some cattle work, also to mate Fizz and Gemma. These pups should be very interesting. Wills has adapted quickly to cattle work and is impressing with his ability.

Although totally absorbed by sheep and work after he ‘switched on’, Wills has matured into a friendly, loyal dog and good mate. He has an amazingly good temperament, allowing little Frank(8mths) to do what he likes with him.

UPDATE 2019  Wills is at present down in SA with Kevin Noble who had been asking me about selling him a bitch for years. I finally realised that he has a number of good bitches and really needed an outcross sire. The two litters he has now should keep him happy for a few years! Hopefully Wills will come home to mate Gemma for the last time. He’s a dog who needs to work, and will probably go out again next year. I know Charles Williams is keen to see how he copes on big mobs and huge acres up at Moranbah. I have Whitney, Wiggle, Glamour and Perks(who really belongs to John Clothier!), four nice bitches by Wills. The cross to Landy seems to be very successful.

Jim Morris mated Yarrabindi Bella to Wills and is very happy with the pups, he’s keeping a bitch.

For a dog who is only 4 years old, Wills is having quite an influence in the Kelpie world. He has an enormous cast.