A very good dog in the Riana mould; I saw his mother Riana Spin work as a young bitch and was most impressed. She has since produced many good pups including Riana Cash II(see sires). I bought Finch as a sire in December 2008 from Jason Wright. It’s not often a proven sire becomes available, and I consider myself very lucky to have him. He has a great nature and is extremely loyal.

Finch proved himself a dominant sire, stamping his class on his pups from any bitch he served.  Finch could be a bit stronger on cattle, but the skills he is passing on to his pups makes him a valuable genetic resource. Many of his pups retain the mustering skills that the Riana dogs became known for.

Finch will live on here through Karmala Harvey, who is very like his dad in many ways. Check out his page under SIRES.

Stewart Oates of Bootingee Station, Menindee is finding his FinchXSpice dog Karmala Rook a clever mustering dog who searches for stock. Finch has now retired to a good home near Beaudesert. 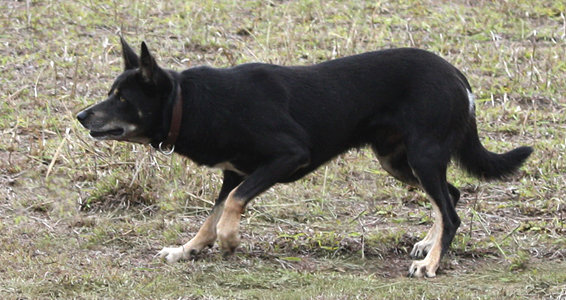 Karmala Rook(Riana FinchXWoorivale Spice) on the banks of the Darling River. 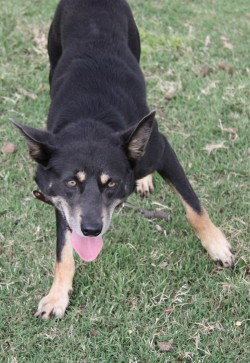