Monday April 4th, and another 50 mls last night on top of 175 last week. And another almost-200mls a month ago. My recently arrived pup from SA refused to get out of her kennel! Who could blame her!

Why, with so much terrible flooding, haven’t I heard a word about building more dams? Especially with an election breathing down our collective necks??

It’s patently unsustainable expecting the present dams to service a rapidly growing population, and all I hear in regard to solving water problems (prior to the floods) was all about pipelines. Oddly enough, piping water from dams that were at desperately low levels through the recent drought?!

I’m very lucky to have a nice neighbour who gave me two truckloads of road fill which has since been put to very good use. Thanks again Matt! 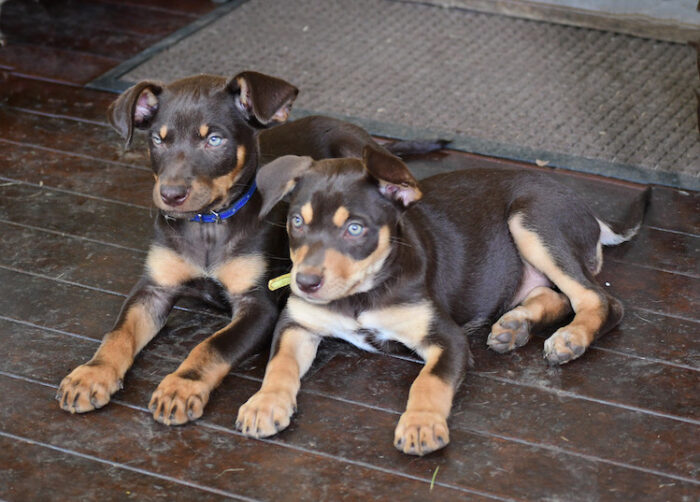 So to dogs. Pups have been heading off to new homes from the January litters but I still have quite a few of them due to losing Tim and wanting to run on pups by him(two of his Mustard litter above). I also have a nice little bitch pup, Malthoid Renfrey(Killili Tap x Karmala Witch) Mel Spencer kindly delivered and swapped for a Tim x Sass girl. Then last week I was thrilled to receive a lovely bitch pup from Kevin Noble, Koonamara Quilt(Glenavon Butch x Koonamara Nell). Butch is by Blackdog SamII(Tracker ChiefxPud’s Sookie) from my old Karmala Tilly(Riana Glide x Karra.Gift IV) and Nell is by Beaumaris Ghost(Tracker Corby(R.Glide x Karra. Ruby Tuesday) from Stockman’s KatieII(Karrawarra Frank x Riana Liz). 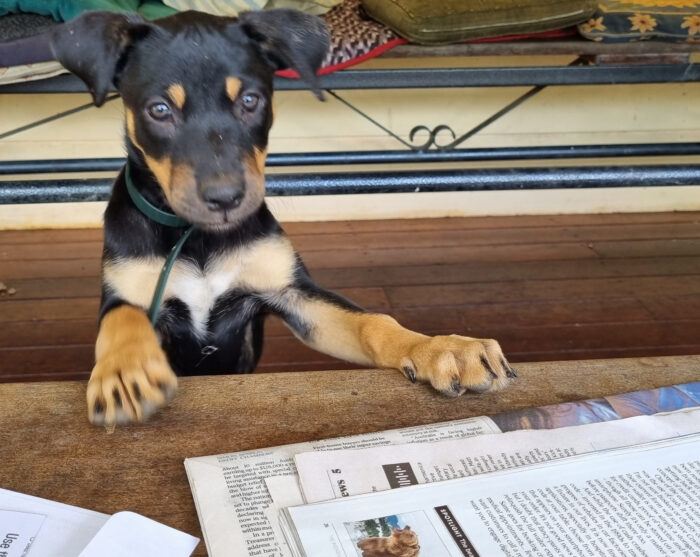 Malthoid Renfrey. Nine half sisters below! 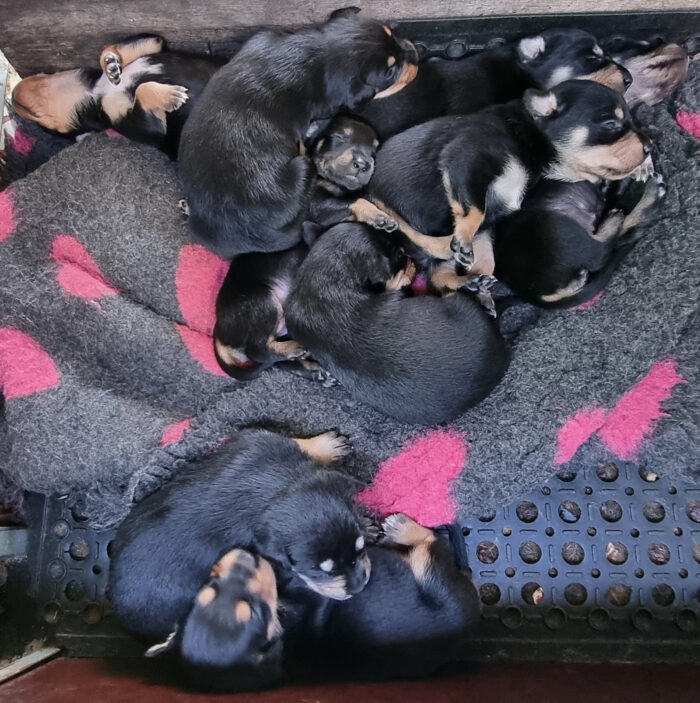 Wills has been a very good sire and we now have seven bitches by him of stud quality….The three below are Glam, Nitro and Naka. The next step is to think about sires to use over them that will improve the mix further. Brandy is the complicating factor there, being Wills’ dam and also the dam of Brock and many good bitches. We’re happy to have a nice young dog, Karmala Blye(Landy x Bimber), and also access to Lynnton Martin’s nice young dog K.Vlad/Barney who are sufficiently unrelated. Maybe the Tim x Mustard dog pup will be good enough to use too. A few Wills bitches below: 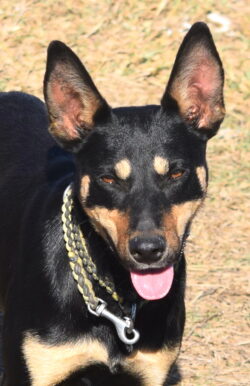 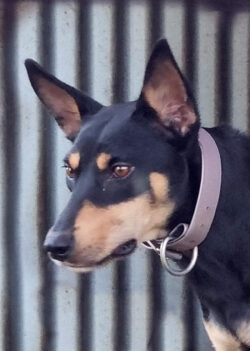 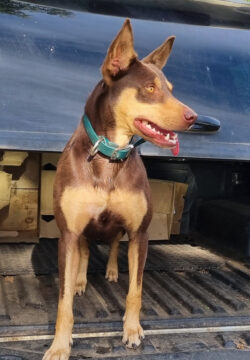 The Tap bitches and the bitch from Kevin will be nice to mate K.Gibson to down the track. In the past I’ve been fortunate that lines have worked out without much planning, just the main aim of breeding two lines and judiciously adding a little fresh blood when I felt it worth try.  It’s quite liberating to have a test for CA now after being limited to known clear dogs for so long.

The recently completed NKT Field Trial for 2022 was completed in Tasmania this last weekend. Congratulations to Gary White and White’s Benny II, winners of the Open. Gary also came 4th, 5th and 6th. Dave Motley  had a great time winning and coming third in the Novice and tying for second in the Open with Ben Coster, only 3 points separated the top 5 dogs! 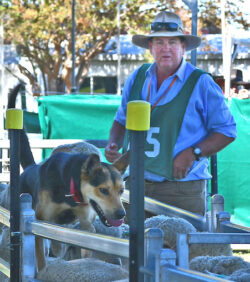 Very low scores seemed to be the result of several factors….yard work prior to completing the obstacles doesn’t help settle the sheep or the dogs, especially the young ones. It looked to my inexperienced eye that the judging was also quite hard and the low scores gave more opportunity for ties. We noticed at Allora last year that changing the course around gave for better runs. Maybe that’s food for thought, especially considering the extra cost of travel to Tasmania…although Tassie in Autumn is simply picture perfect and a great spot for a holiday. But I must say it looked a bit chilly last weekend, with woolly beanies all the go late in the afternoon! Great to be able to watch the finals live on Youtube, but as a non trial person I wonder that a dog needs so much direction on delivering from the Cast! Maybe it was more obvious after watching Arthur working Gibs that morning. Not a valid comparison , of course!

With so many good young bitches I’m always thinking about the older ones and try to retire them while they still have some good years ahead of them. They are spayed and placed where they’ll get light work and lots of TLC. Bimber is the latest, and after falling madly in love with the photo of the retriever in the vet’s surgery, she turned out to be the only one so far to pick at her stitches! I had to replace one and put a cone on, so taking the stitches out was just a matter of removing it and she did the rest! 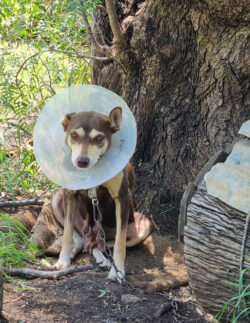 Bim has been a great bitch and we have Blye to carry on her influence in the stud. Her big teats are another reason to retire her. They seem unrelated to the number of pups/litters reared as some bitches older than her are fine, but it’s not something you want to breed on. 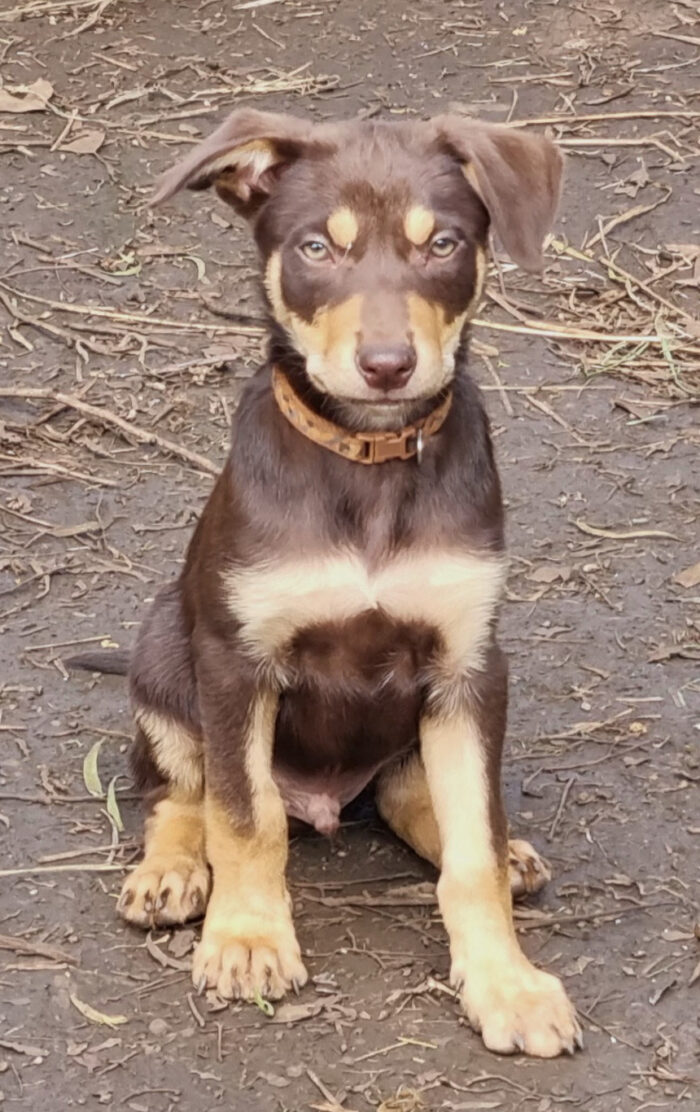 This very nice TimxBim boy Karmala Trip will be offered in the Working Dog Sale at Rocky 24th April. His DOB is 1/1/22.

We are also offering Claywolf Cash who is going well on cattle. Check out Ray White, Livestock, Rockhampton. The Dogalogue is available now online and there’s a video of him working nicely for Derek Zeimer.

I picked Gibson up from Arthur last Saturday and he paid him a big compliment….”I think he’s a very good dog, Jan.”

I remember when I collected Brock he said “Well I can’t find much wrong with him!” Arthur liked Wills a lot, and Gibs is just “Wills with frills”! ….a little bit more refinement and a little more responsive to Arthur. There’s a long video on Youtube under Karmala Gibson, 8 mths. This little grab, I thought, summed him up well. Arthur had gone ahead to open the gate. Gibson has a litter sister Floradora(also a cocktail!) who has been doing some cattle work, this is her first time on sheep.

Speaking of old Brandy and the influence she’s had on the dogs I’ve bred, here’s the connection to Gibson:

Brandy was by Glendon Benny who was by a dog Arthur bred called Koomalah’s Ted. 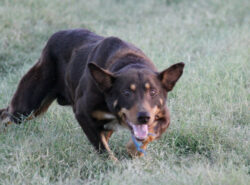 Below: Kahlua the day she switched on all on her own

Kahlua(Tracker Gibbs x Brandy) mated to Riana Glide produced Gin Fizz(below), dam of Gibson(xWills who is WilsonxBrandy) That all feels a bit Biblical!! Incidentally, a Gibson is a martini pretty heavy on the Gin with a pickled onion!

An old friend brought a bitch to mate to Cap recently. 16 years ago I took Riana Delta Dawn to his dogs… His nice dog Coin was a bit confused at my small mob of quiet sheep so Tash got out to give him a hand!

And here’s a lovely photo to finish with. I had an order but the lass was expecting a baby and was inclined to put off getting a pup until after the event. I admit to trying to persuade her to take this pup as I  really liked him…he’s Wal x Remy.