The brightest news this month is the nice rain we got in the second half of March which is giving some growth before winter…thank goodness. It’s been very patchy this summer all over Queensland, and Nobby has done better than most places. Well, end of the good news…

Sadly I lost Peggysue(Karmala GlenxRiana DeltaD) in March. I loaned her to a client who had lost his yard dog and she was penning up for crutching and having a ball; I suppose you could say it was a workplace accident. Before letting her go I had weighed up the pros and cons as it’s always on the cards that this can happen. I have two very nice bitches from her and a good dog pup, so decided it was preferable to risk her rather than a young dog, but that doesn’t make the loss any easier. She was a lovely bitch and very handy on stock, a good brood bitch and a happy character to have around…also the best daughter of old Delta.

Luckily I had decided a couple of weeks earlier to send Kahlua down to be mated to Karmala Glen(R.GlidexKarra.Gift), Peg’s sire. Glen is in Sydney with Serafino Gallina and I’ve really enjoyed being in contact with him again and hearing his delightful Italian accent! From only two matings Glen left some very useful dogs; Karmala Lyndy, owned by Lisha Bennett, has also bred on well and is leaving very handy pups. She has just come back to be mated to Wilson.

Later this month my other Delta bitch Cadelle(Deli) also died from snake bite while away working with Matt Bignell. He left her with his ute while he moved some cattle and found her dead when he returned…with a dead snake beside her. Deli was a very likeable bitch and was very loyal; she went to work for Max Wilson at Dirranbandi for a few months when his old dog was injured, and he said whoever let Deli off the chain in the morning was her boss for the day…she’d stick to him like glue. I guess we just have to move on, but to lose those two bitches within weeks is certainly tough.

J.Cara has whelped to Wilson and has a good litter of eight, only one bitch.Cara has been working goats for Marina Angel Smith at Texas, and this litter should be very good workers on any type of stock. Gemma is due to Riana CashII next week, and Koomalah’s Dash due to Wilson shortly after. Brandy is feeling very pregnant but isn’t due until May, so could be expecting a bigger litter than usual, she’s certainly demanding special treatment and gets very offended if asked to go into the dog run! There had been plans to send her to Sweden in pup but technical problems had the Swedish dog people ask for a second hip Xray; the first result was excellent and had been assessed by the usual panel of 3 from the Australian Veterinary Association, so both my vet and I decided not to repeat an Xray. Brandy was nearly two months late coming on heat after the first one, so I think it was a good decision.

Arthur Crumblin is delighted with Wills(WilsonxBrandy) and says he reminds him very much of his all-time favourite, Riana Ace. He’s an intelligent pup and after a couple of weeks with Arthur he’s ‘second guessing’ what he intends doing next, so is coming home for a few weeks until he’s old enough to take a bit more pressure. He’s certainly a prospective sire, so there’s no need to hurry his training; he will be a very useful dog over my Riana/Karrawarra bitches. Arthur has already decided to mate his good bitch K.Treat  to him later on, a big compliment! Photo below. 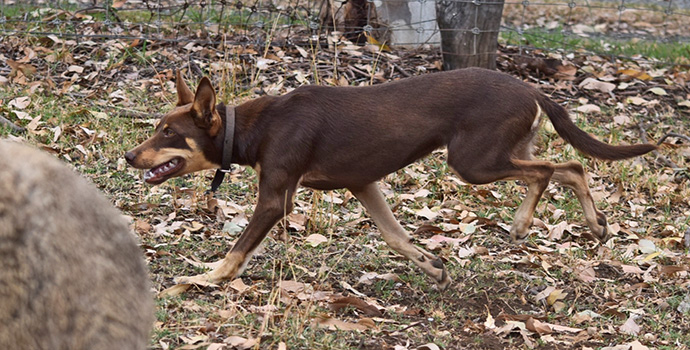 I have since started Poppy(ChopperxPeggysue) and  I’m thrilled to bits with her, she’s very  much in the same mould as Wills. These are sticky old stud ewes and only her second run.