This year seems to be flying by, it’s surely not a month since I sat down last time to update this blog! We’re having frosts again but it’s so dry there are no added bonuses…like pretty dewdrops on cobwebs. Not even white frost on grass….well, there’s not much grass either! But the water troughs and tins are freezing over, it’s been down to -5′. Lovely sunsets and sunrises but so bare and dry.. 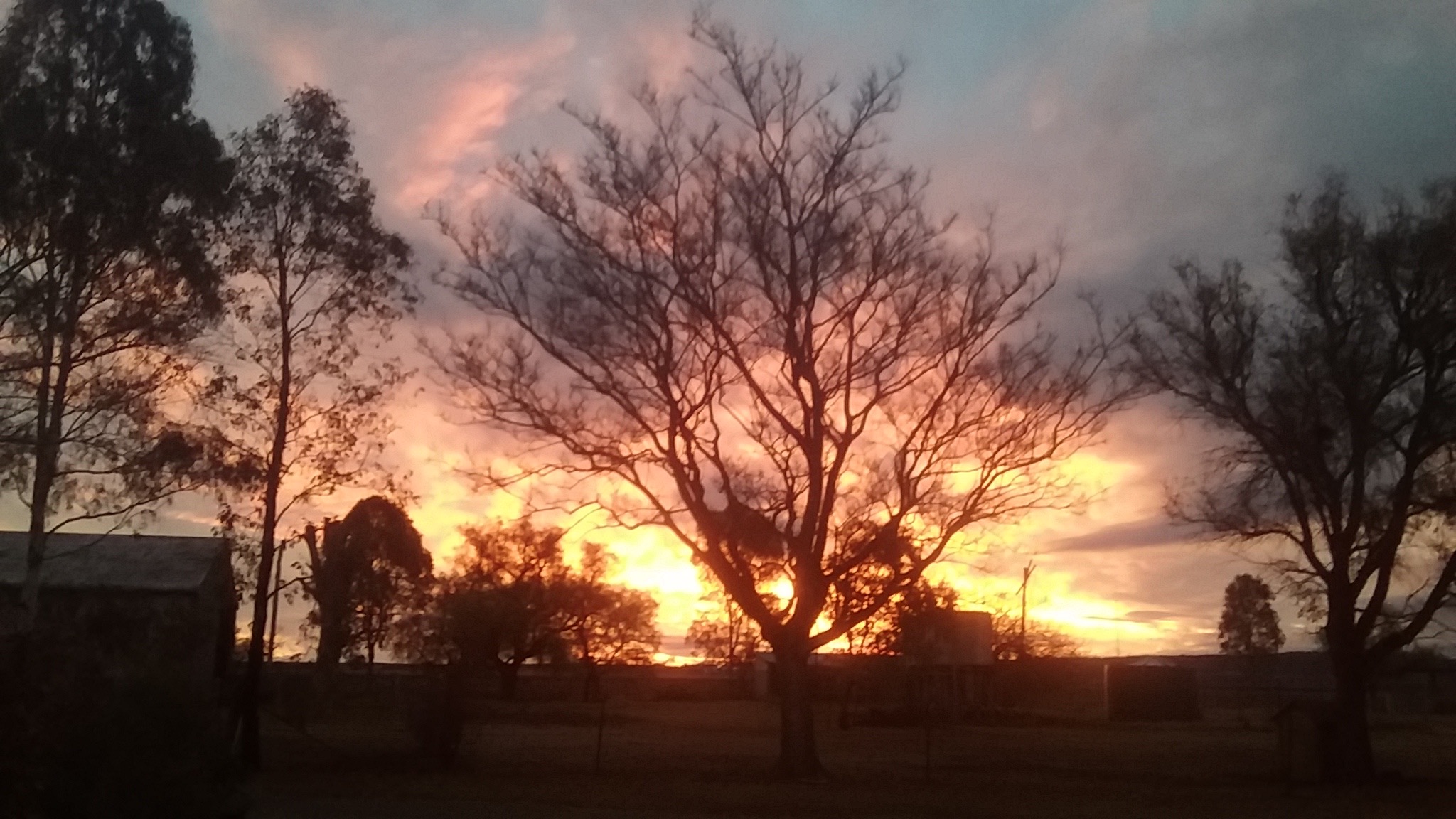 Happily a number of pups left for their new homes in July, but I still have a few nice older boys and am about to get them going on sheep so I can film them.

That can be pretty funny when you’re on your own and trying to juggle a pup on a lead, a camera, and a poly stick….and open and shut gates. My last effort  featured lots of pink stick and no pup! I only have 6 weaners left and they’re getting very smart, I might have to find a camera person as the older dogs I used for holding the sheep have gone to retirement homes. The good thing is that a bad video can still show how good the pup is!

First, a good luck story. Karmala Wagga(Wills x Gemma), a very smart little boy, went off to Kandanga with his new owner last Monday. On Tuesday evening  I had a phone call saying he’d climbed out and vanished. I was quite upset, thinking there was little chance of him turning up again after such a short time at his new home, and worried about him and his owner’s loss all week. Saturday morning early and I had a phone call from Scott. Wagga was back in his kennel when he went outside, much to his delight!He said there’s 200ac of scrub next door, so goodness knows where he spent the week!Very smart pup. 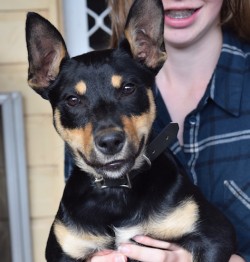 Heli has been such a good mum this litter, finally resigned to motherhood, perhaps, but very much enjoying being spoiled. She seems happy in her new totally enclosed big pen too, just coming out at feed time, although gone down the paddock like a flash to round up the ewes if she gets a chance. Tash weaned her pups and was suddenly just mad to work again. After a few sessions of having to catch her off the poor old ewes, I decided to give her a new career as a three sheep trial dog! Entirely up to her whether she takes up the offer! Andrew Martin asked me if I had anything that might trial and she certainly has the work, whether she has the will to comply is another matter. I don’t plan on mating any bitches for a bit, so it seemed a good opportunity to see how Andrew gets on with her. Tash and Wills are a bad pair, they’re searching for stock  all the time, as you can see below..! 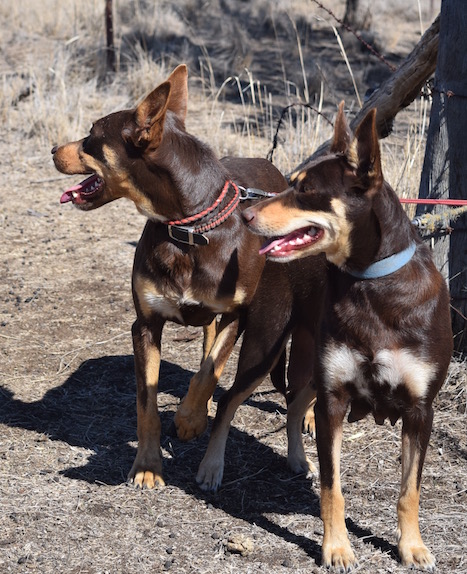 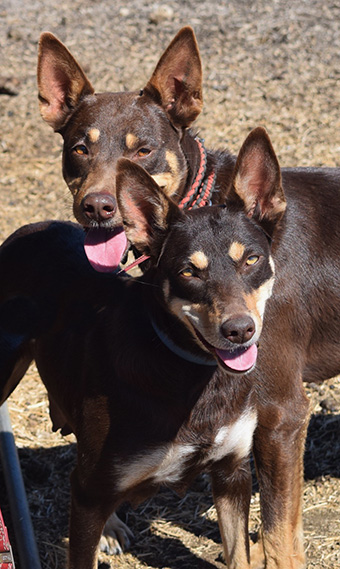 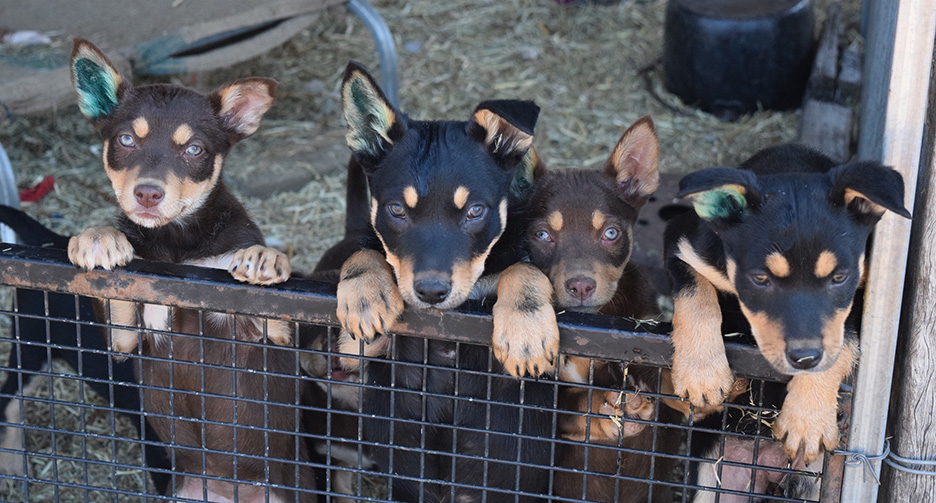 The four Hardy x Tash bitch pups left. Harlow (right) has since gone to Blackall and Harper (left) is off to Swan Hill soon.

I still have three bitch pups here from the Landy x Whitney litter and am trying to decide which one to keep, they’re all nice pups. Bliss (Brock x Bimber) below,  Dallas (Tracker Spy x Remy), and also Quin (Bobby x Quiz) are lovely young bitches and will be staying here, I think. 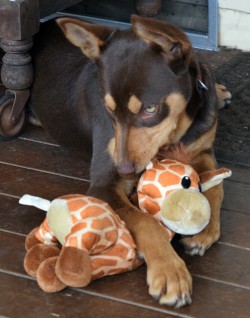 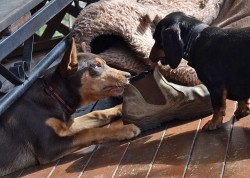 One of the Landy boys is an extra special pup and I thought might suit Marina, who has his dad down t Texas. He’s so laid back…this is him travelling down to Applethorpe to meet Bob. The most exciting news for the month was Wings finally showing up in pup after resisting all male attention for about three years! The only dog she has allowed within cooee when she’s been on heat has been Wills, so he’s the sire. It’s a double cross of old Wilson so the pups will be interesting. Wings is demanding lots of attention and loves getting her coat on these frosty nights. 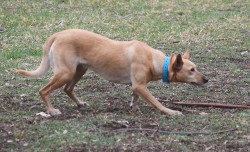 Poppy, my other Chopper bitch from Peggysue whelped to Wills nearly three weeks ago. She’s been a great first time mum and has a lovely litter of seven including five girls. Brock is working down at Nyngan and is impressing with his patience with ewes and lambs. His litters from Vie and Bimber are starting to work and look very nice; calm with nice natural work. At this stage I’m not going to mate any more bitches this year but will certainly be using Brock again over Bim. This fellow Blitz is a really nice pup and has gone to a local home where I can keep tabs on him. He worked beautifully first up. I have a nice young bitch for sale, Karmala Brigit(K.Changi x Benalee Mocha), 14 mths. Not the smartest I’ve bred but super friendly and can work quite nicely; she’d suit a smaller farm situation with some sheep. The first vid. shows her starting as a pup with Rodney Garrett.

These two clips show her on Aug.12 with Arthur Crumblin.