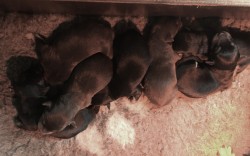 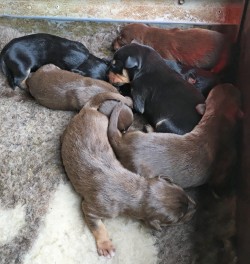 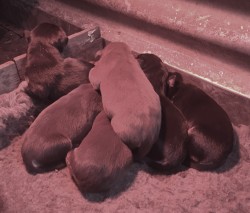 First day of a new month and a very chilly morning! I have two new litters of pups and have been out early to check on them after finding one of Gossip’s little girls nearly dead on Thursday morning….

Not many bitches are as switched on as Jarrah, and Gossip seemed happy to leave her to perish. (Jarrah carried her litter of eleven under the house twice last summer when it got too hot!) I gave the poor little thing a warm soak in the bathroom basin and she gradually thawed out; still alive two days later, I thought she might get pneumonia. Heli whelped a couple of days after Gossip and has been a bit more maternal! I have both heat lamps on at night and the puppies keep nice and warm….if they stay under them. 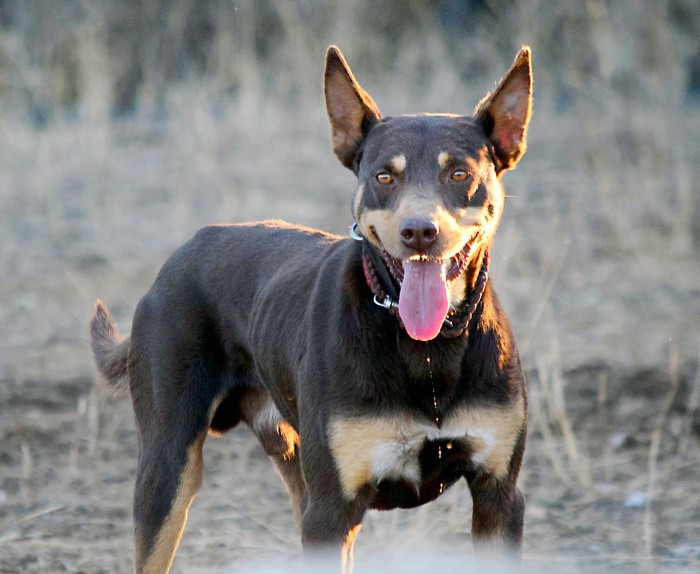 Meanwhile, Wills has been away boarding with Mary from All Animal Transport while we try to sort out his health problems. He went for X-rays yesterday and what they showed had us all gobsmacked. Expecting spinal damage, instead they showed huge problems in his chest cavity with fluid build up. He was also running a high temp despite showing no signs, still eating well and appearing normal. The vet couldn’t believe a dog could be so ‘sick’ without physical symptoms….I said that was pretty normal for working kelpies, they only look sick when they’re about to die! After a long discussion we decided to hit him with a very strong course of ABs and see what the blood test has to say. Poor Mary is keeping an eye on the situation, ready to rush him to emergency if he deteriorates. Fingers and toes Xd. It’s a comfort to have a very nice lot of Wills progeny but devastating news.

Orders for pups continue to roll in, together with desperate requests for working dogs. I have no idea why this is going on, perhaps stock prices have something to do with it. I have over fifty orders for pups and doubt they will be filled with the spring litters; I am now saying 2021….. 14 pups so far with 5 more bitches to whelp at this stage. Bimber is coming into season and will be mated to KarmalaIS (aka Inkspot!), Wills x Midnight. He’s a very interesting dog, super cool dude, was introduced to cattle for the first time yesterday and after having a good look at what was going on, slotted in straight away and even nose bit a cow that walked right up to him.

Livvy(LandyxWhitney) has  been working for Ron at Nyngan and has been mated to Motley’s Brian, a full brother to M.Snow who was exported to Montana, USA. Brian has left some nice pups and it was a good opportunity to get an outcross mating with lots of White’s blood. It’s quite liberating knowing I can test for CA now, it opens up more options. I’m showing the mating here as the colour coding shows the very different breeding lines of the two dogs involved…almost a “never the twain will meet” situation! As with most outcrosses, the benefits will come in the following generations….and it won’t happen this time either…..Livvy missed. 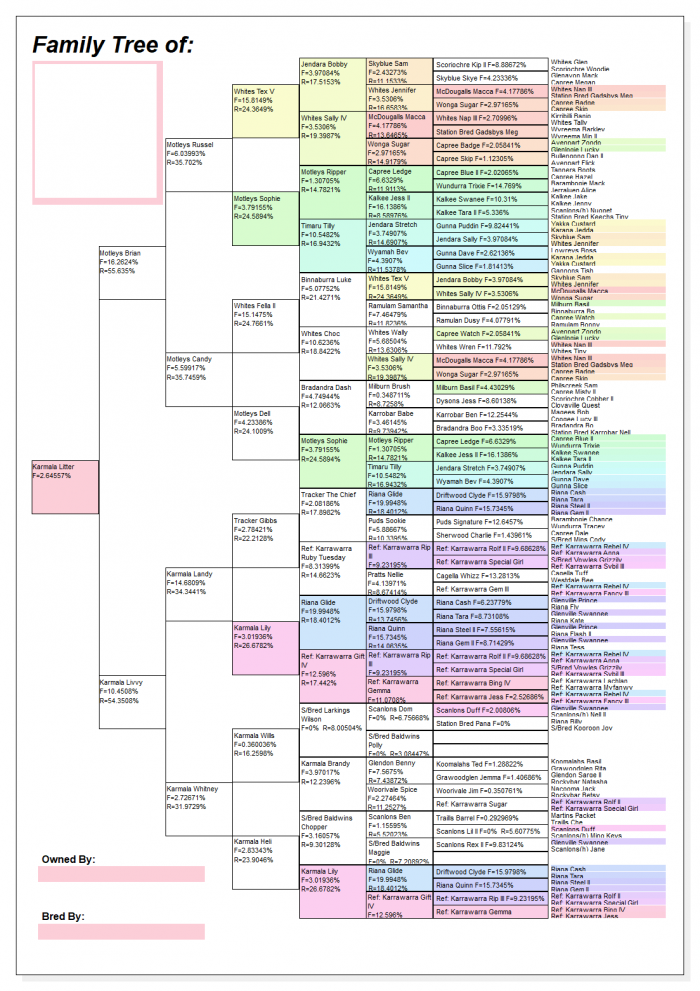 Now for some really excellent news. Arthur Crumblin agreed to take Naka for some training and rang a week later delighted with her progress. First question he asked was “what are you going to do with this bitch?” The last time he asked that was about Brandy, so Naka’s in good company!! Best pup since he had Wills, was the next comment. Nice to have my opinion backed up. This photo taken a few months ago. 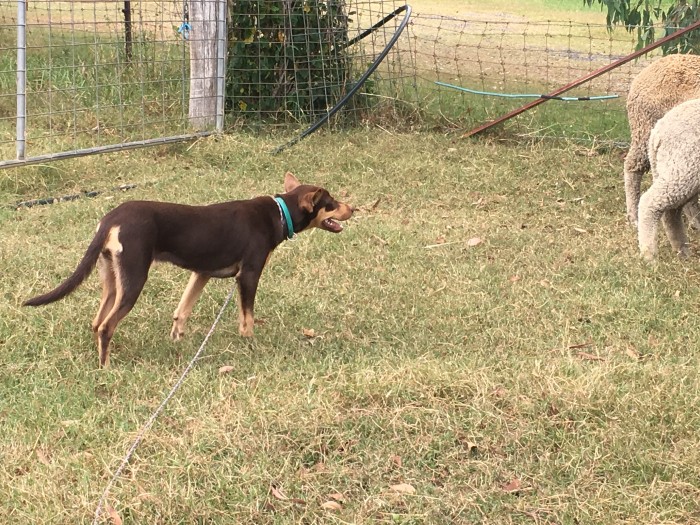 The season here continues on a very fine knife edge…. quite a lot of sowing on only 20mls and two disappointing rain events of about half that amount since. There are more green patches but everyone is praying for a decent rain. Other areas have been luckier. I’m OK with less sheep, plenty of dry feed. Battling to come up on 20mls 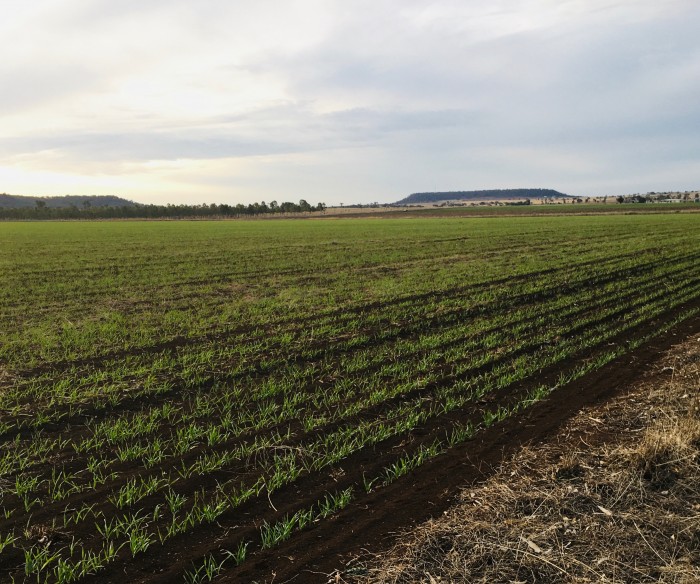 This year Emma has been working out of Dalby and we’ve been able to swap dogs around more often. She took Glam(Wills x Gemma)  a few months ago and we’ve been very pleased at the way she settled into work so calmly and quickly; easy to forget she’s just turned one. This has proved one of the best matings I’ve done with four bitches/pups run on and looking very promising. A few shots of Glam. 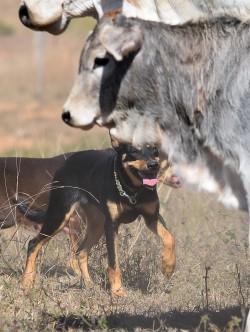 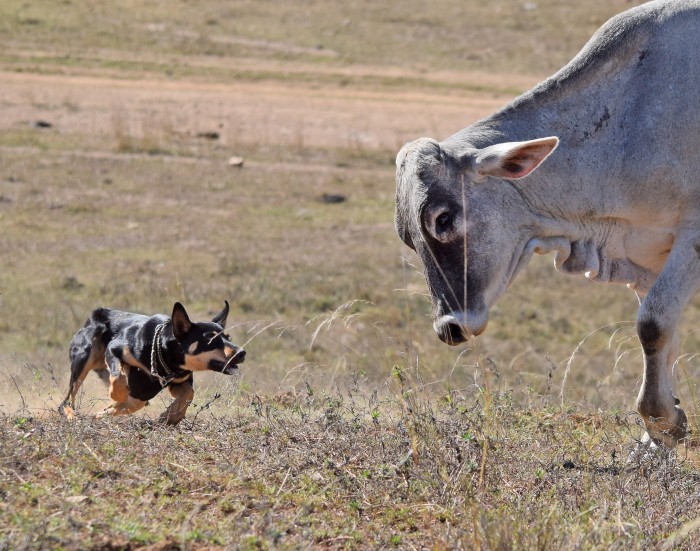 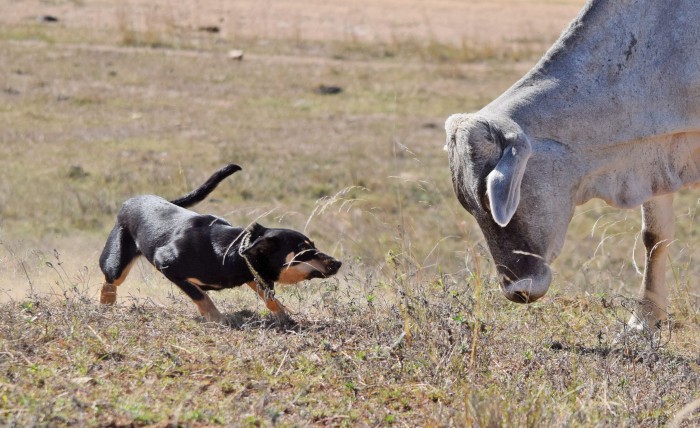 This will be a busy month with True, Whitney and Tash due to whelp here.