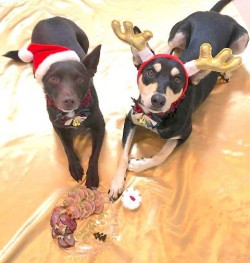 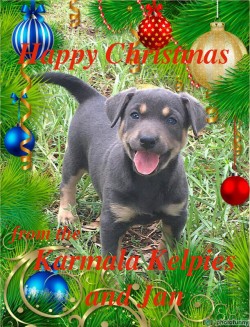 One of the’ hottest Spring days ever’ for some areas of Queensland as I sit down to write…not sure if my brain’s melting but it’s only 36’C in the shade on my deck, the same as yesterday.

The early rain in October which we all thought was a harbinger of La Nina, has left in its wake some very thirsty crops. Not all areas are so dry, Leyburn and Allora have had storms and are noticeably greener. All we can do is hope the heat cooks up some good heavy dumps!

On the dog front things are slowing down a wee bit and by Christmas I should only have the Remy and Gemma litters by Harvey and of course, the ‘keepers’ from the previous ones. Still plenty of enquiry and many of them are for pets, despite my best efforts to put people off and point them in the direction of more suitable breeds. Maybe one third of enquiries are aware of the challenges of keeping a young kelpie in suburbia. I do wish people were more scrupulous about selling expensive headaches!! There maybe lines of dogs with a much weaker ‘work ethic’ than mine, but most people I speak to have horror stories of working breeds kept in small areas and getting very frustrated and destructive. I had to laugh when I received this email on Sunday…had intended keeping her but her energy levels were a bit much!

“Boy is this little pup on a mission, every day she invents something new, today was jumping in and out of the toilet bowl but at least she loves the water. I had to separate her  today from her new best friend which was a dead bat. Each day I would throw it in the bush but every morning it would be back on her bed ,it is now a foot underground but it wouldn’t surprise me to find it in her bed tomorrow. Her and Harry are now best mates which is a relief because  my main purpose in getting a pup was for company for Harry if I am not around. She is a very determined little dog but also quite obedient considering her age. Training starts tomorrow and knowing her I think she will enjoy it. Regards, Ken.”  Karmala Tweet, below! 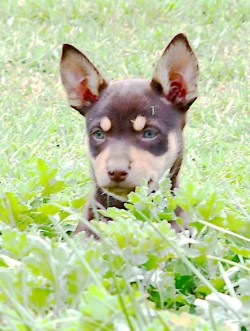 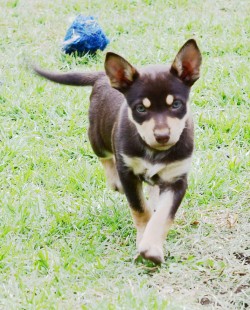 There have been a couple of other lovely red/tan girls that have been very tempting “keepers” at an early age, but then their imagination takes over! Photos of a couple of them below…these also sold. Imagine them in a backyard in town. I take trouble to warn buyers of these little smart ones, of course. Thank goodness most now have raised, enclosed kennels. I’d intended removing the old tank when we built the yard but it was a frosty morning and the Fergy wouldn’t start! Most pups don’t bother climbing up. Another who did was K. Lariat(Lewis) who has gone to live with Aboriginal Elder Bigali in the Pilbara. I’ve had some very interesting and educational conversations in the process of getting him over there. He had a few days in Perth on the way up and promptly took over the heeler’s kennel! He has a lovely new bed up at Roebourne. Bigali goes out very early collecting seed pods and nuts from native trees which she turns into jewellery; such an interesting lady who realised the importance of education for her children, who have achieved great careers. 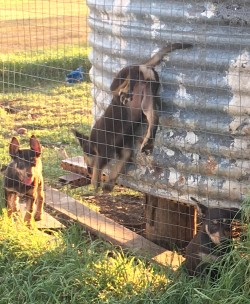 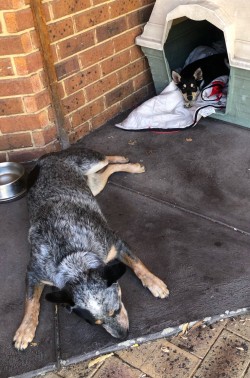 I have been very lucky to be able to buy a couple of Wills daughters from Kevin Noble. Very nice girls, both potential stud bitches. They enjoyed meeting dad and big sister Whitney. 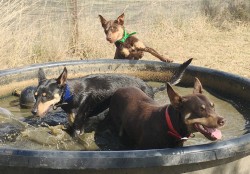 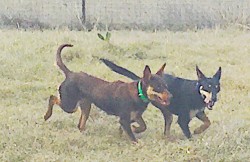 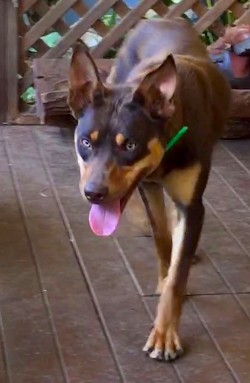 Very sad news. Changi died for no apparent reason in his sleep about a month ago. I think I need to wrap up this little pup by him out of Hell in cotton wool, she’s very much like her dad and will hopefully carry on his wonderful temperament and independent, smart work. Karmala Jeli. Calm and smart. 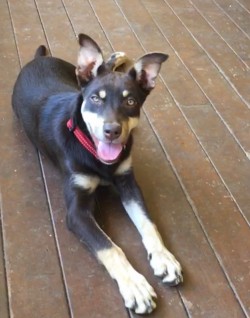 The Midnight litter by Wills is about to leave, nice pups just waiting for a visit from Emma and Derek to pick their keepers. The girl who tried to pinch mum’s bone at 4 wks and got her cheekbone smashed by a bite had several fragments of bone removed last week. She’s an amazingly tough little cookie and has carried on throughout as if nothing had happened. Part of her lower eye socket was broken off. It will be interesting to see if  she is affected later on. She won’t be going too far from home. The ISIS x Bimber pups have been a delight. Not 8 weeks old until the end of the week, they’ll be well ready to leave; above average weight and absolutely bomb proof!

All for now, this little bunch are about to be tattooed!