Well, I guess we’re all wondering where the last year’s gone…..that seems to be pretty common about now, but I’m hearing younger and younger people complaining these days. I used to think it was only old farts who said that!

We’re suffering from the wetter than usual winter rain, dry as chips at present and missing all the storms so far. Hopefully the present heat wave will bring some decent rain. The first year I was here it teemed on Christmas day, so here’s hoping!

I had a week in Hospital in November but seem to be doing well now; everyone raves about keyhole surgery but he needed quite a few keys to get to where he was heading, judging by the evidence!  I had a lovely  big surprise when Emma Zeimer brought baby Frank to visit one day while I was in St  Andrew’s.

Em said K.Gemma has been working well with hubby Derek and Midnight(K.KahluaxTracker the Chief), who isn’t much more than a year old. Em’s favourite bitch K.Gin Fizz(GlidexKahlua) has been out of action for a few weeks with a litter of five to K.Polo. pics below at 5 weeks, a lovely even litter. 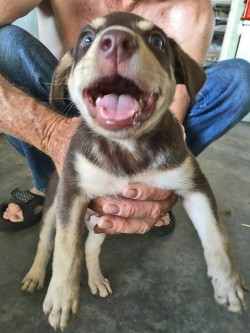 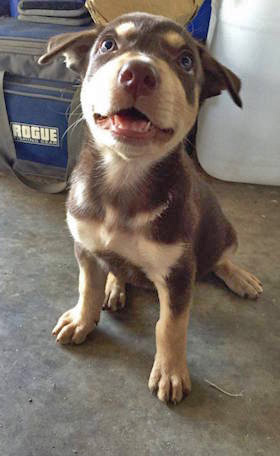 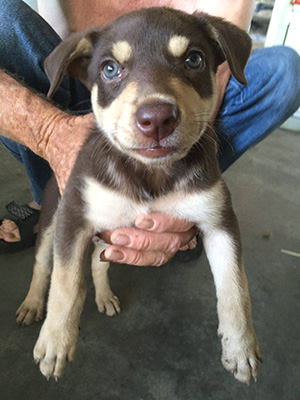 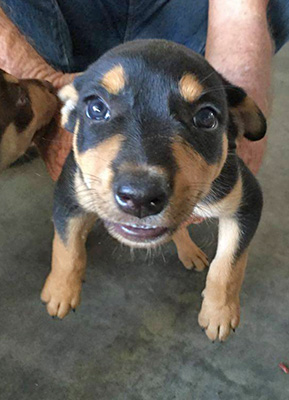 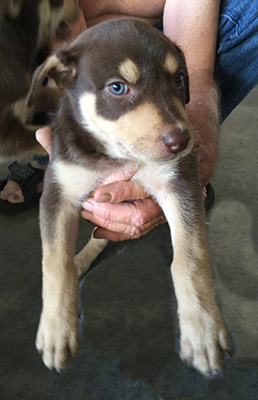 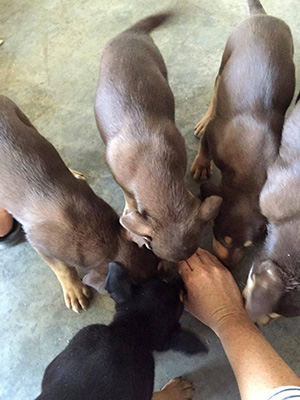 Due to Gemma’s clever timing she’s been mated to Chief recently; Em and Derek were going up to visit with David Hart on Riverside, so fingers crossed she’s in pup. Chief isn’t getting any  younger, and a double cross of old Glide would be a bonus.

Cara has a lovely litter to Karmala Landy with Marina at Texas. She says she’s spending far too much time with the pups but is really enjoying handling them. A few photos at 4 wks below. 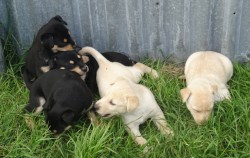 The Lil litter by Wilson is about the same age as Cara’s, here at 5 weeks. 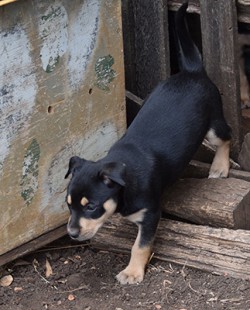 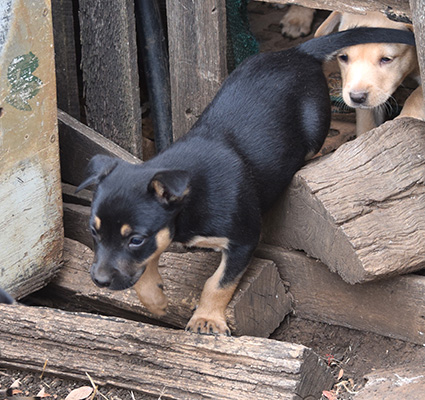 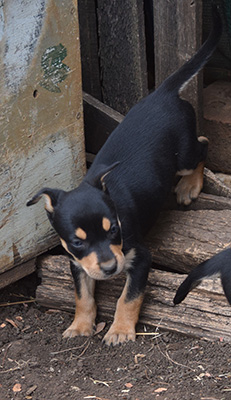 Mocha produced seven pups to Polo this week but only ONE bitch. And no creams. After her initial surprise, and a rather late kicking in of the hormone interleukin (which fires up the mothering instinct) she seems to be coping well. I must admit to a worrying first night as I simply covered over the front of the kennel…there was a big storm…and left her to it. The pups were still wet and a bit cold and not suckling, but had snuggled in under her for warmth, had stopped yelling, and she was stretched out. Such a relief to find all normal next morning. I think interfering too much can be counter productive. Of course the current heat wave is another challenge, but the old meat house/dairy which is insulated with asbestos sheeting, is a cool spot, especially with a fan running. I just make sure I remember not to sweep down the walls….

It’s been very encouraging to have heard recently from quite a few clients who are working young dogs from Karmala. Some have been to David and Sean’s Stock Handling Clinics. Nice to hear that their cattle are much quieter and appreciating the break from excessive heel bite! Also good to hear that they’d like another pup later on.

The Wilson pups are proving themselves in the real world and are such natural workers they cause very little grief for such young dogs. Some are a bit tentative early on, and both Arthur Crumblin and Jeff Ritchie have commented that they just need time. They do start to work quite young, but need a bit of patience while they work things out for themselves…not the sort of pup you’d want to put commands on too early, they could misunderstand and think they were doing the wrong thing when they’re not really. 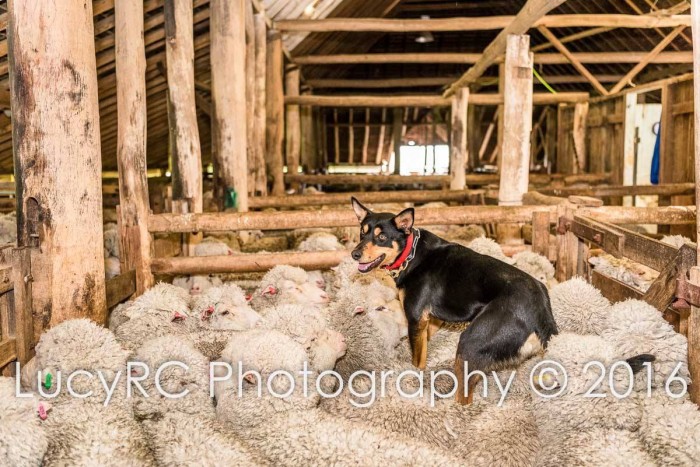 This is a professional photo of Karmala Calvin Klein, better known as Jag(Karmala BrockxKarmala Chanel) penning up for owner Andrew Ardis at Deepwater Station during shearing. Wonderful timber work, it reminds me of the Barunah Plains shed in Victoria. I worked in a lot of sheds when wool classing long ago, and some have great character.

For  those long time clients who check this page quite regularly, here’s a treat for Christmas reading from my favourite correspondent. I always enjoy getting Phil’s updates and I’m sure some of you will remember previous ones. It’s great to sell dogs to someone who invests so much time and thought in them with great results:

Very best wishes to you all for a happy festive season and a really great 2017! I’ll let old Chopper add his greetings too, as I think it might be his last Christmas. He’s a legend, still enquired after by old friends of Mat’s. Beside him is his g’daughter Maggie(WilsonxHeli), having her two bobsworth!