Hmmmm. Not too sure about this one  but settle in for an interesting ride!

Because I had cancer a few years ago and have been on Prednisone (a steroid that decreases immune response) for a year, I decided not to stress my poor immune system further by getting Covid vacs when ‘told’ last March. So far so good, as Queensland has been well protected  and I’ve avoided three unnecessary ‘Jabs’. Hate that term, why not ‘shots’? Now they’ve let fly with the new rules on the basis of so many being ‘double vac’d’ when State and Fed.Govt. figures disagree wildly on that anyway. I’m being careful and don’t go anywhere much, so hopefully will be OK and catch the next version which should be a weaker-again variety. What happened to the Spanish Flu when there was no Vaccine? It disappeared eventually. The use of the present vaccines is encouraging mutations, as with the common ‘flu. Enough. To dogs!

Sass beat the New Year in with a litter on Dec.29 to Walkabout Tim. Heli waited until Jan.1 to produce a nice litter to Karmala Vlad(Barney), and I still have two to go probably this week, Mustard(Koonamara Nardia), a young bitch x Wills) in pup to Tim, and K.Bimber also to Tim. Looking forward to the Tim pups. I watched his dam work at the NKT at Allora last April where she won Best Cast, Lift and Draw and also Best Type. When we found Tim he’d a bit of history missing; it became apparent that he’d had a hard time at some stage with injuries to his spine…maybe run over.. and he underwent multiple physio/chiro sessions to help him get more mobile. He’s a brave dog and has maintained a very positive attitude to life; is now working cattle with confidence and reads a mob very well. Em says he often anticipates a beast breaking that she doesn’t see. He carries a lot of Cagella blood and I’ve seen quite a lot of the dogs in his pedigree working. Lots of Wickham’s Tex, whom I’m told was a nice big calm dog who won some trials. I saw Pratt’s Nellie when she went back to Tony Parsons 20 years ago, lovely bitch who always remembered her pups when they were adult. Barry Madden’s Westdale dogs were handy allrounders based on Karrawarra. 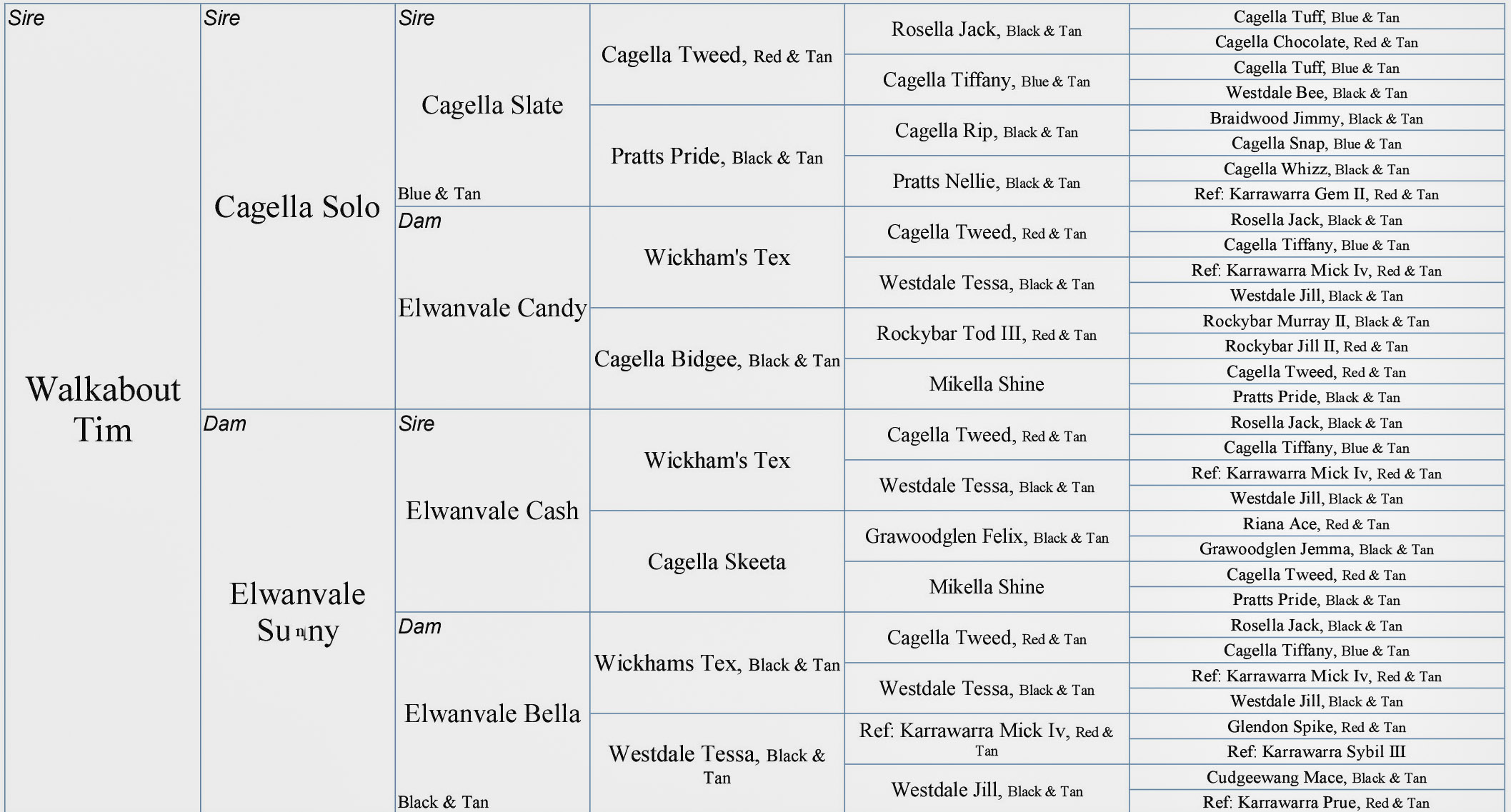 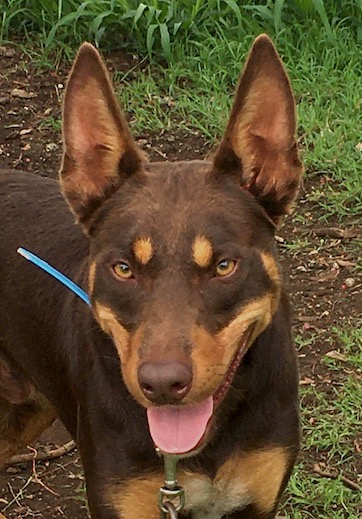 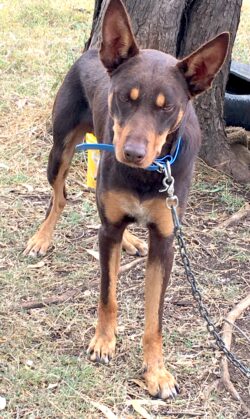 Karmala Vlad(Barney) has been with Lynnton Martin since a pup, his service fee for the mating of Vonny(K.Snow) to Driftwood Boondy. He’s proved himself a very handy member of Lynnton’s contract team; his dogs have to be able to tackle all sorts of jobs and any one that makes it to his permanent team is very handy. Lynnton told me a rather hair raising story recently, he thought Barney was gone for good!

He was moving a big mob of 2000 weaned lambs and had to get them over a long bridge…..the lambs started across moving well, and had just reached the other side when a car ignored the signs and people telling it to STOP and drove into the lambs causing them to break back around it, off the bridge and away into the scrub beside the creek. Lynnton and the dogs were way back, having got the tail of the mob onto the bridge, when Barney saw what had happened, flew over the side landing 15′ feet down on dry rocks and bush….Lynnton thought he’d lost him, broken legs and ribs at least…then saw him appear a couple of hundred meters away heading around the lambs that had broken away into the scrub! Barney didn’t appear any the worse for wear! 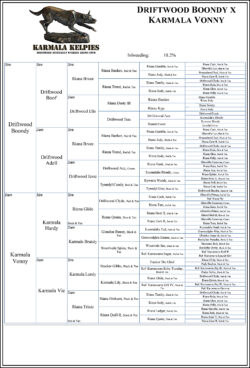 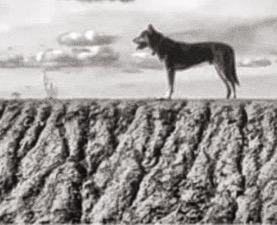 There are some good videos of Barney working on Lynnton’s Facebook page Tynndyl Kelpies.

The pups from Gossip and Glam are slowly moving on. Only 8 weeks old so no hurry at all, mainly sorting them as to where they’re going. Em was here for a week after Christmas and we had a pretty good look at them. 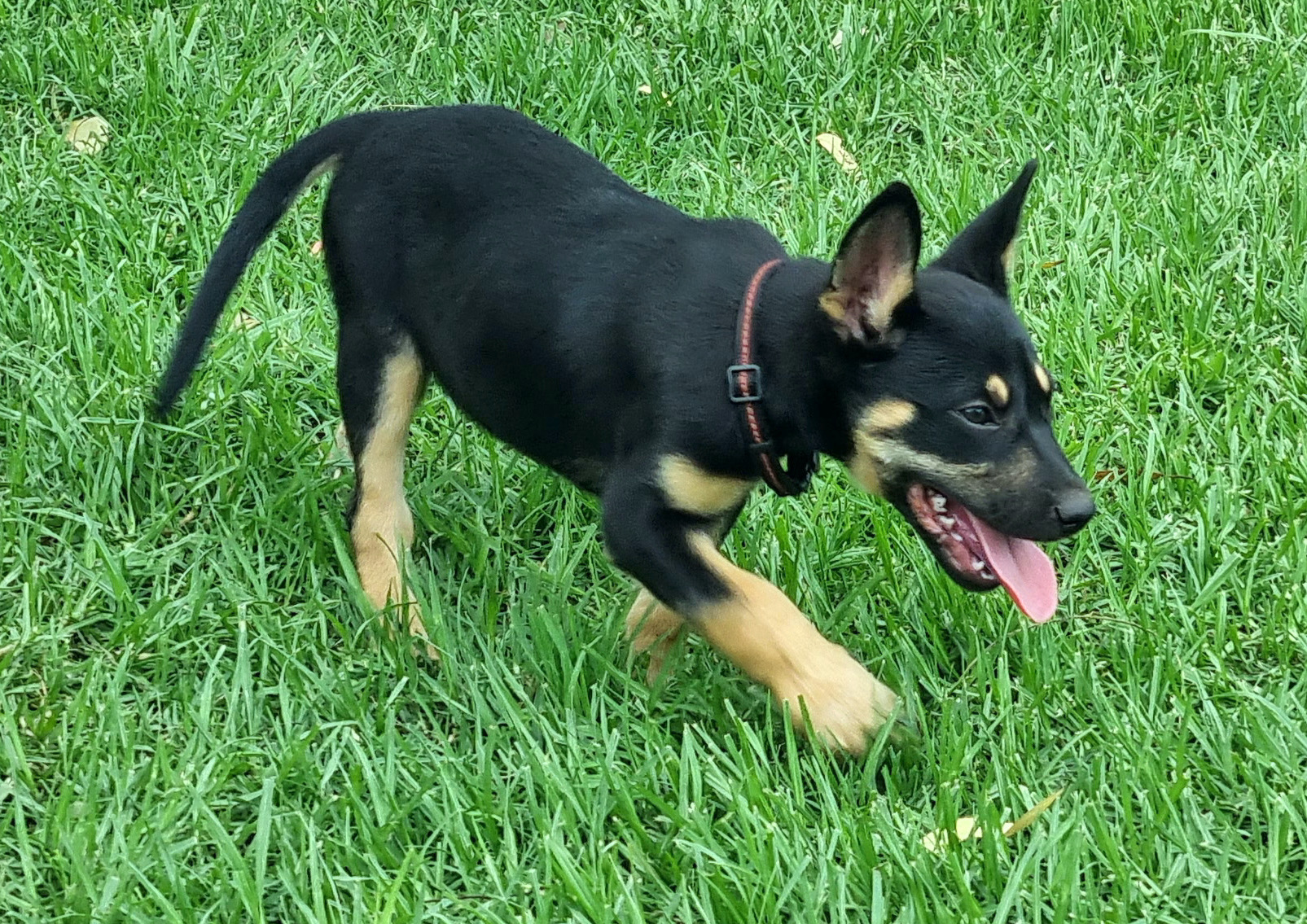 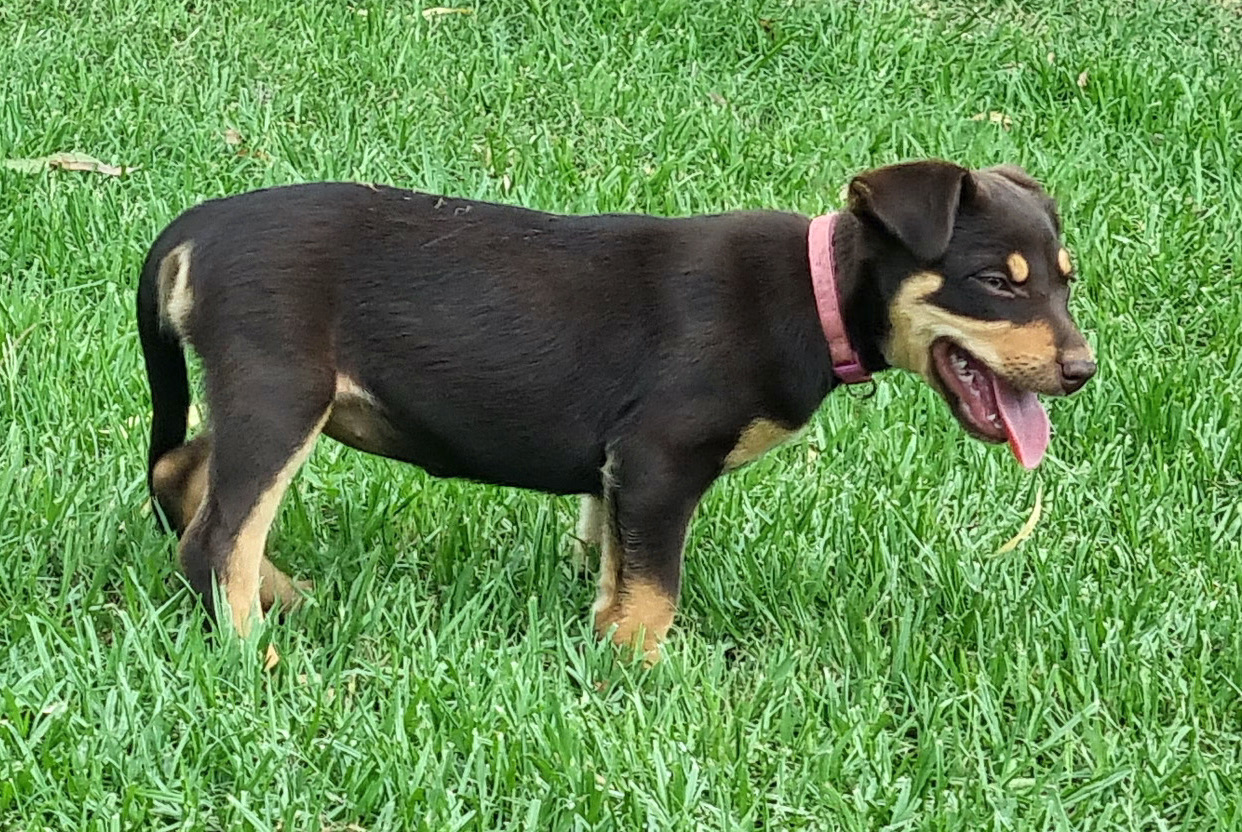 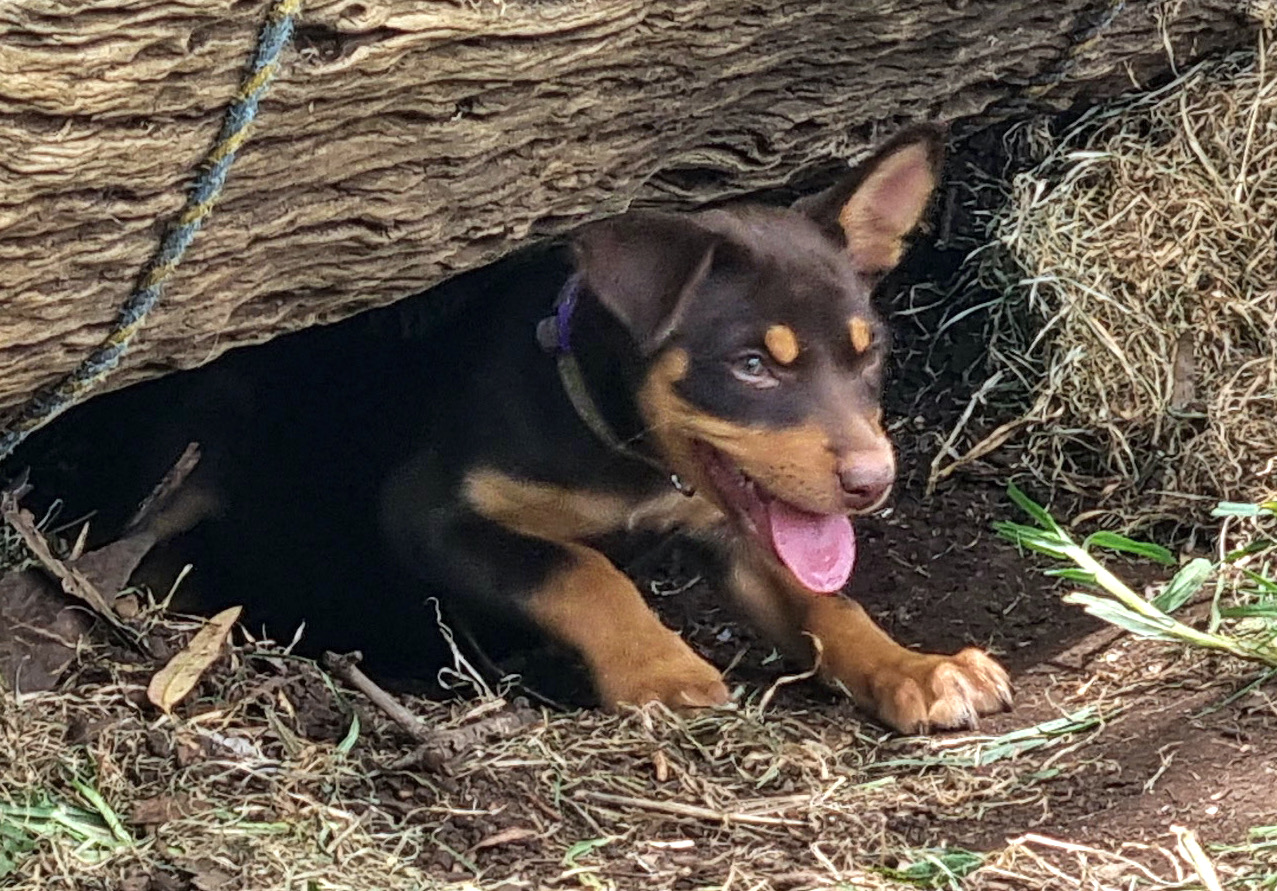 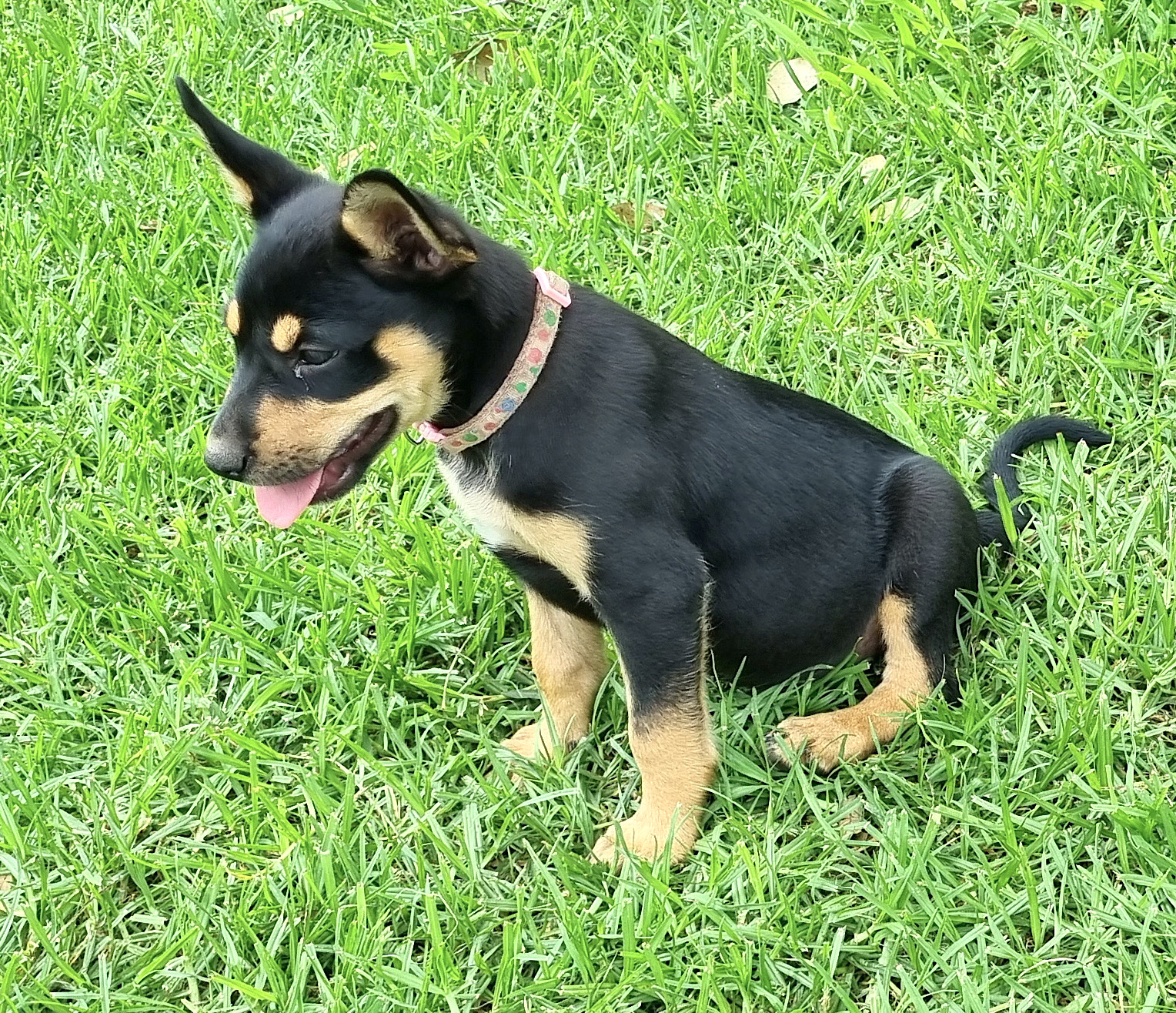 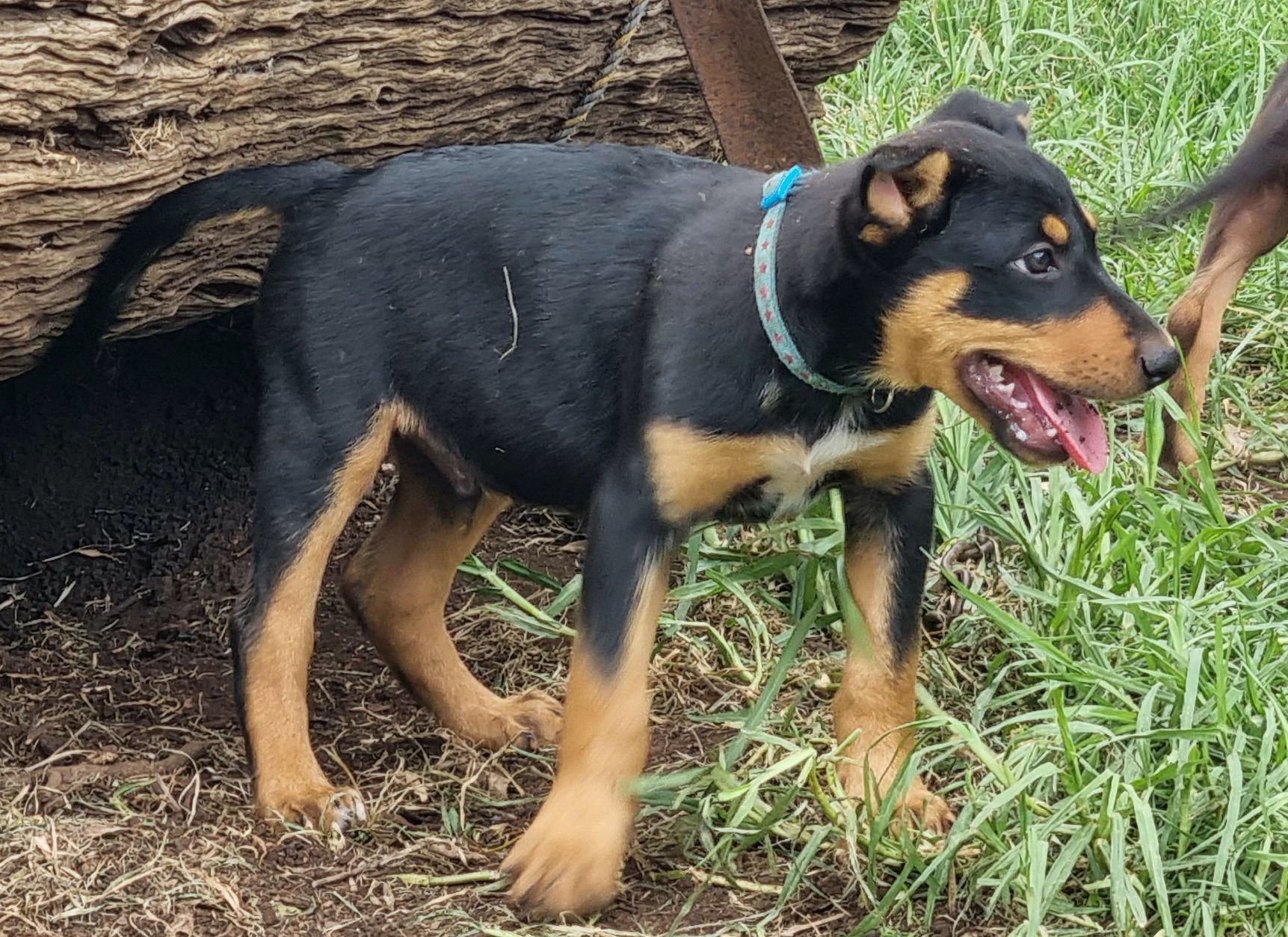 Below…. a couple of bad videos of two nice pups, we both liked them. Click on URL to view second pup.

I got the sheep in this week to give the ewes a quick dag with the blades, they’ve grown a lot of wool with all the feed. Naka thought it good idea too, I was impressed with the amount of presence she had on these quiet sheep; they were keen to go up the race with nothing more than a look from her….! She’s enjoying working sheep after a few months on cattle up north.

Naka missed getting in pup last time, I was too slow taking her to Landy. Next heat I’ll try her to Cap, a Landy g’son out of K.Dash(Riana CashIIxK.Brandy). 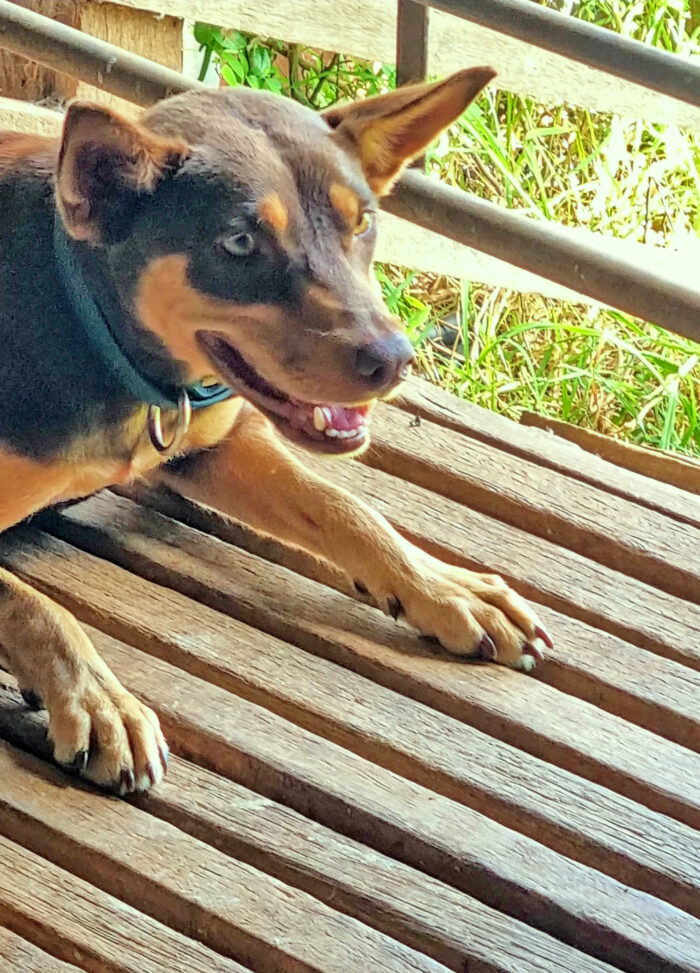