Funny how winter seemed to know when to start…our first big frost for the year on June 1st! We’ve been having some delightful autumn weather through May, but all good things have to finish sometime. So lucky that we’ll continue to get the good weather through winter, just with some very chilly early mornings. A few road trips planned this month!

I’ve been busy feeding pups again after a bit of a break. Heli has done a great job with her five Wills pups; if all the pups he leaves are this friendly I’ll be very happy! These are positively bomb proof and it’s very hard to move forward when they’re around! 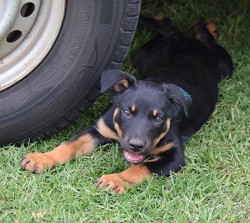 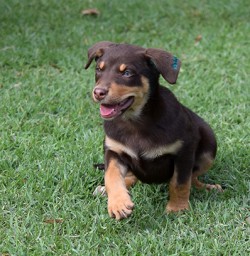 Remy has also been a great mum for her seven Harvey pups apart from wanting to climb out of the pup run after she’s fed them! Brandy certainly has passed on her “Freedom Factor”. I took a video of her when she was young opening the sliding bolt on her cage, it’s still on Youtube. Almost everyone wants bitch pups these days so there are a couple of boys for sale in this litter, should be very good on sheep and goats. Ron recently turned down an offer of $10K for Harvey from a goat musterer. 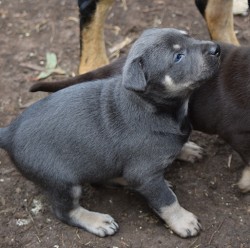 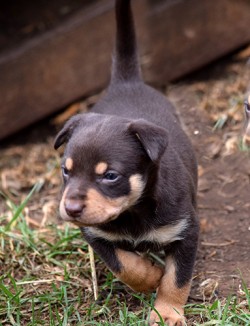 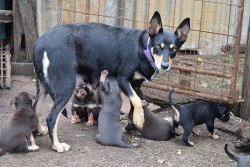 The next litters due in June are Cara(to Landy) and Lily(to Wills), followed by Mocha to Changi.

Cara has since had four, a black/tan bitch, two cream dogs and a blue/tan dog.

The new Queensland ‘Dog Laws’ came into effect on May 26 and all litters born after this date will be subject to them. Working dogs have been shown some leeway, I am able to sell to another farm without having to microchip pups but am still a bit doubtful about what happens when selling to farm workers and managers, etc. I will have to clarify that.

I gave Nessie a run this week and took a bit of my usual sub standard video…lucky you don’t need good movies to identify a good pup! Funny the way she accidentally went out the gate at the end…

I love the way these pups with some old Scanlon blood are inclined to work at a nice relaxed trot, saving energy.

Next week I’m heading off to Trangie via the New England Hwy. for a change (I usually go down the Newell). I’ll drop off a couple of big pups to Jeff Ritchie at Black Mountain for some training, then visit Di and Lynnton Martin, catch up with Lynnton’s dogs next day and also collect Mocha from Ronnie Robb…and deliver his WilsonxCherry pup.  Sounds good, two nights away is a real treat! I’m very fortunate to have a wonderful dog minder and never worry at all about the dogs when she’s looking after them. Thanks Heather!!

Another of my bad videos! I was really impressed by Changi, he’s a very nice dog; a bit surprised here to find himself working with a dog he didn’t know! Poor Banjo hurt his tail and it became infected, so he’s missing most of it! Ron also brought Harvey in with him, he’s grown into a lovely dog; he’s a bit quicker covering stock than Changi, who’s pretty much a do it yourself kit once he starts mustering a paddock, just standing up on his hind legs to check in on Ron now and then. Ron’s a very good judge of a dog, he sees a lot of Garry White and Dave Motley and their dogs, so has high standards. I take a lot of notice of his comments, it’s invaluable having feedback like his.

The week after my visit to Trangie I headed off on a much shorter trip, up to Nanango to meet Em and swap dogs around. She brought Fizz and Gemma down to whelp with me, also Tash(CashxBrandy) who looks like being more of a sheepdog, she’ll go down to Jeff Ritchie when I collect Maggie and Bim. Wills also came down to mate Vie(Landy x Riana Trixie). Although Vie knew the dogs from having spent time with Em and Derek she totally freaked out and went into attack mode…she’s been very hormonal! Luckily she liked Wills, so we had to hide the others in the ute and have a rather public mating near the Peanut van!!