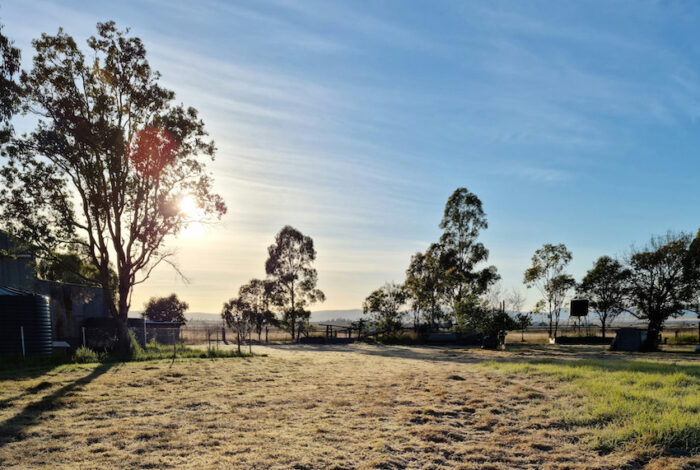 Winter has rolled in on cue with a few frosts already; last year we had a warm winter, unusually so. Only a few years ago there was a white frost here every morning in July, so we’ll see…..The kennels all face east and the dogs love lying in the sun as it warms up, often moving their bed out into the sun. Winter nights are very quiet here, as they curl up in their warm beds reluctant to leap up to bark at the 2am grain train that can sound very loud and close on a frosty night!

I have three litters at present, the Wills x True pups are almost weaned and doing very well, a very nice lot. At this stage I’d be happy to keep any of them, friendly, confident, smart little pups. Photos of some of them below. 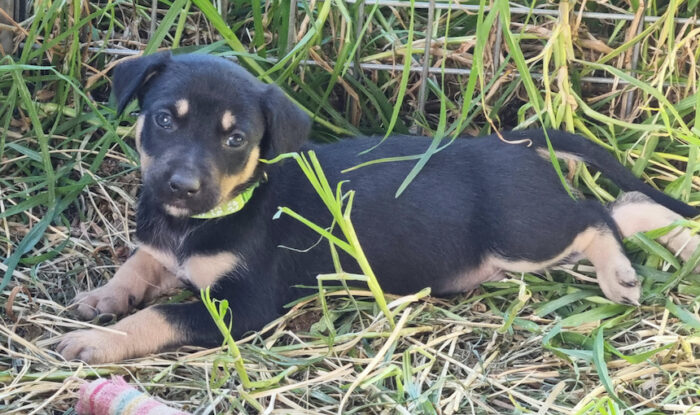 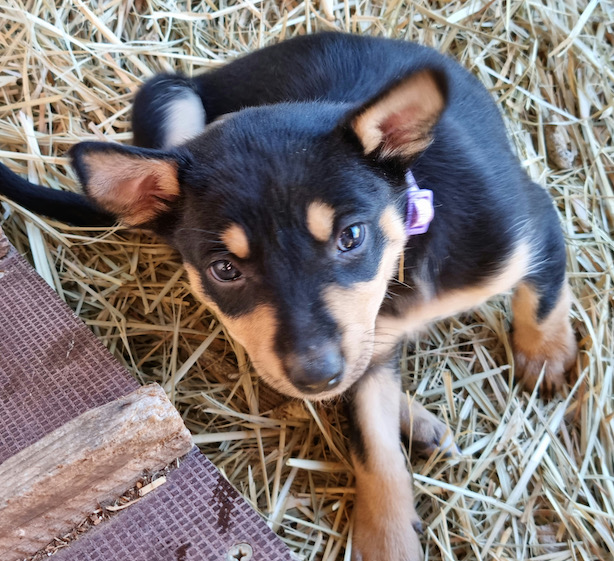 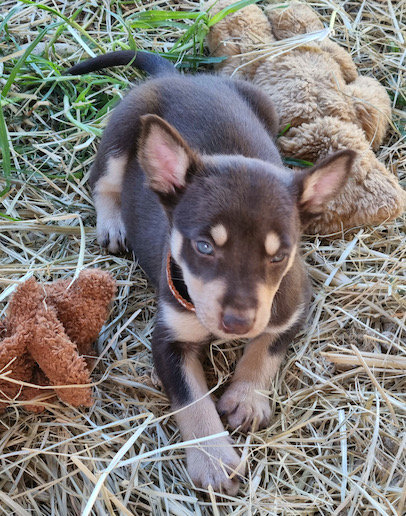 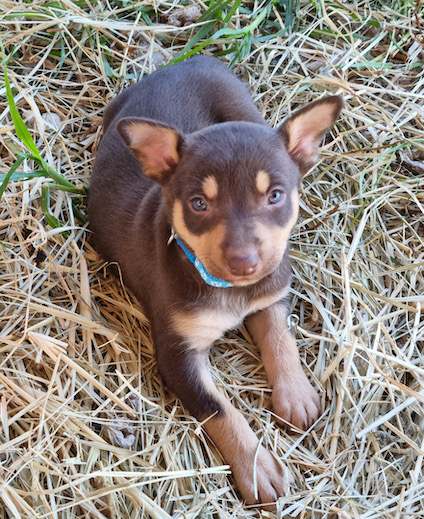 Bimber whelped to Landy on May 17, 10 pups and 9 survivors. A little blue male, the smallest born, didn’t make it. They’ve spent a lot of time under the infrared heat lamp and are doing really well. It’s set up so they can roll away from the heat if they need to and I turn it off at about midday. I read recently how infrared light aids gut bacteria, and how Parkinson sufferers sleep much better when exposed to it….so much we are still discovering. 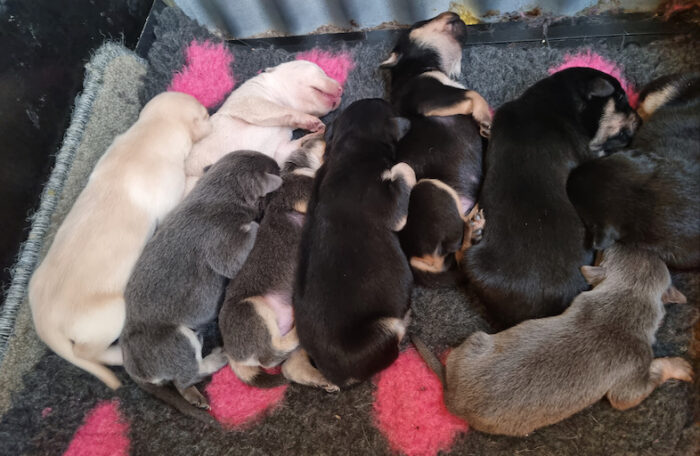 The other litter is a big embarrassment as Tash decided she was madly in love with Siggy, my mini dachshund dog! Tash has always been a law unto herself, so I shouldn’t be surprised. The pups are just beautiful, very calm little sausages and very different from Bim’s litter in the adjoining kennel. They will make lovely pets, far more suitable than a pure bred working kelpie!

As if that wasn’t enough, Siggy also got Lynnton Martin’s Jarrah in pup….the sire was meant to be Wills! After being sick last year Wills sometimes has trouble mating a bitch, Sigs must have snuck under the fence when he was having a rest. So Siggy was heading off to the vet but was rescued at the last minute by a lovely lass who wants to use him as a sire over her three little mini daxie bitches! She’s offered to mind him while I have bitches on heat….thanks Michelle! 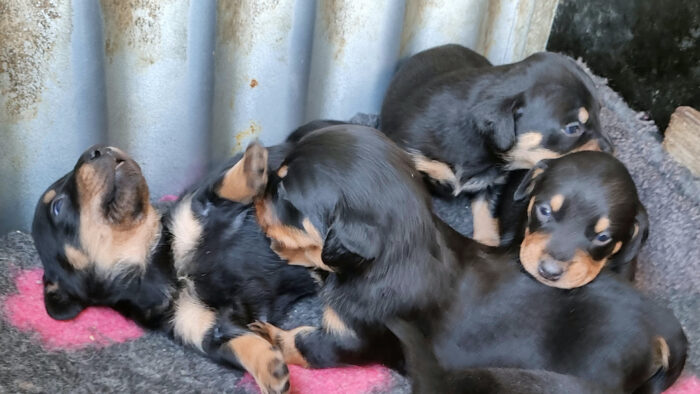 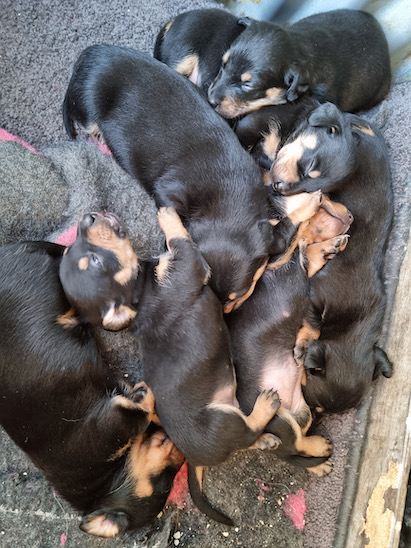 Midnight proved not to be in pup and Glenn McKay very kindly gave her a ride up north to the Cattle Dog Trial at Comet, where Derek Zeimer was competing and keen to get his favourite girl back. Congrats to Glenn who won the Open Trial…again! Third year running, I think.

Derek has been keen to have a go at trialling for some years and once he got a taste for it he was hooked, going on to compete at Alpha, Blue Mountain and Clermont. He had some good scores and some success, he and the dogs growing in confidence as they worked things out, and Derek receiving a lot of help and encouragement from the other competitors…who mainly run Collies.  Below, second with Midnight(94) in the Bush Handler at Blue Mt. 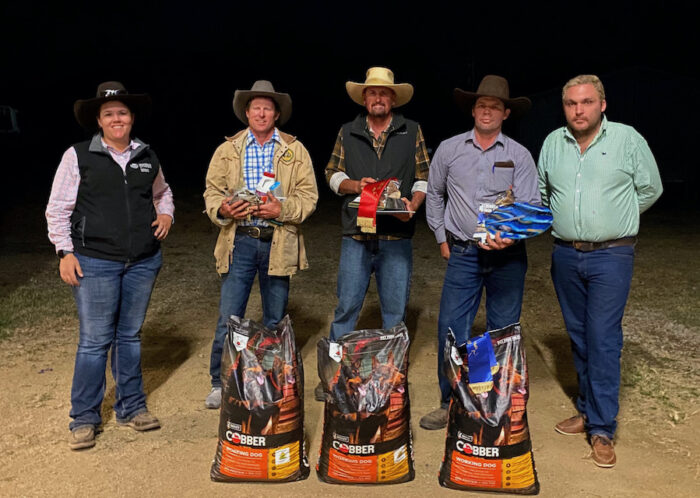 Last weekend I met up with Lynnton and Di Martin down at Moree, it’s awhile since I made that trip and it was nice to see dams full around Goodi. There was a lot of cotton coming off further south; hopefully it can find a market now that China no longer wants it. Now they’re trying to increase their population(3 kids allowed…why!??! Not enough polution already?)so there might need to be a change in policy eventually; hard to imagine how the planet will be able to feed the ever increasing hordes of humans, it seems a very short sighted plan. As, indeed, is the Western capitalist hunger for money which is certainly the root of all evil! 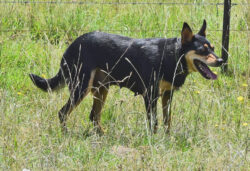 Heli(Chopper x Lily)  has gone to Trangie for a holiday and will be mated to Karmala Vlad(Barney), Driftwood Boondy x Karmala Vonny(Snow). Lynnton likes Barney a lot, not surprising when I saw the video. Hopefully he will get some nice pups to compensate for his litter of Mini Delpies.

Emma is coming down this weekend to attend a Denise Hawe ‘Kaden Method’ school for training dogs, now situated at Warwick. I think she’ll find it very interesting.

It’s funny how information turns up out of the blue and seems to fall into a pattern. The latest: a couple of dogs with pedigrees featuring Avenpart x Belrieve breeding. I’m interested because I’ve bought a mating to Avenpart Wump from Mary and really don’t have a bitch I’d be 100% happy to mate to him. I don’t want to waste him on a big outcross. As I get older I’m in more of a hurry to see results! Mating the two dogs I’ve come across to bitches I’ve bred to mate back to Wump seems a bit long term but my gut feeling tells me it’s probably the best bet.

Keep warm, and all you Victorians keep smiling!

UPDATE June 12. Victoria is certainly having a tough time…floods now, just devastating. My family near Ballarat reported 100km/hour winds. I hope those wonderful old trees in the gardens survive, most planted in the 1860s after the Gold Rush, I’m guessing…. 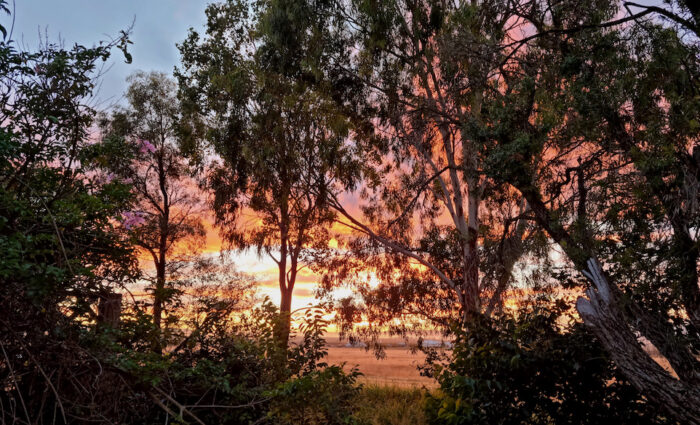