The amazing autumn weather came to a finish with a bang last weekend, but not much rain unfortunately. It would be SO good if it could be spread around more evenly and thus save many people a lot of grief. Updating this post on June 20, I’m delighted to report good rain yesterday, 85ml here.The farmers around me had spent up big time on fertiliser and seed for winter sowing on the strength of the forecast and many will be lucky to get any value from it; we measured less than 10mls.

Very nice to get the dog runs dampened down though, it’s been very dusty in the big run; more dogs and less rain, not good!

The pups are doing well, and at the time of writing this I haven’t got one pup for sale…all are booked. I’ve had very good enquiry and have turned down a number of requests for pets, as usual. A few pups are going to people on small acreage, but most will have working homes. It’s a difficult decision because I know some of the later ones will have shorter, harder lives. You just have to trust that doing what they were bred to do will make those lives happy ones.

A gentleman from Townsville travelled from Brisbane last week to check out his Gemma pup; by sheer coincidence he discovered that his first kelpie, which he bought from Lynnton Martin, was by Karmala Gordy. Lynnton is taking a ClydexWin dog pup and I’d spoken to him recently.

It’s very satisfying that a number of purchasers of pups are deciding to carry on with the raw diet and worm with DE.

In addition to my three litters I’ve had Tracker Clancy here for a few weeks, looking after her and her six pups for David Hart. Clancy has been pack fed since weaning and still thinks she should be able to ‘share’ her pups’ mince! She got a bit cranky when I tied her up away from them and fed her lamb flaps. She’s been very easy to handle, apart from the once she decided to round up my ‘dog’ sheep. The five old ewes had no idea what was going on when she side slammed them to stop them! I don’t think she would have worked sheep more than a couple of times in her life, and she had a ball.

Very sad to hear John Clothier lost his nice Akubra bitch, Cover. She was due to whelp to Wilson in a week or so, so doubly devastating.

Wilson hasn’t been very well, there’s something not right inside his nose and he’s being treated with herbs under the TLC of Marina Angel-Smith. It’s taking a bit of bribery to convince him to eat them twice a day, including sardines and freeze dried green tripe! He’s looking well and now his cut pads have healed and he’s had another remedial massage, he’s flying around at high speed again! Mat Larkings called in last week on a cattle buying trip and poor old Chopper was keen to go home with him; Wilson’s been having a bit of fun with some of the girls lately and wasn’t too fussed.

The two litters here by Marina’s Cash are a delight. Gemma’s only have another two weeks to go before leaving home and are bright little things. The Brandy pups moved out of their big whelping kennel yesterday and took off in all directions to explore! There will be a break now before I have more litters born. Wilson has mated Heli(ChopperxLily), so everything crossed for some nice bitches. 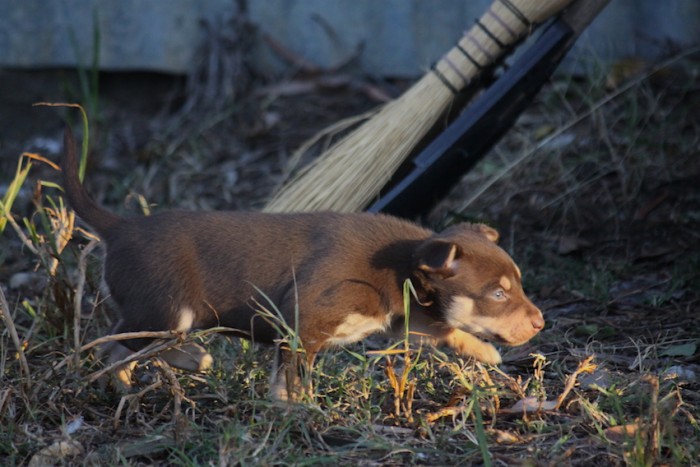 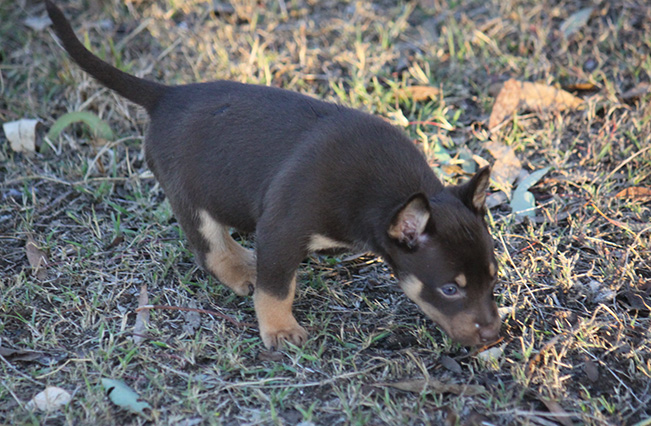