Rain at last! Not much, but with cooler weather the dampness will last a bit longer. There’s no depth of moisture at all in this area, and further north of Toowoomba is also suffering. Queensland is such a huge state and to hear of heavy rains in the far north every weather forecast is very annoying, to say the least!

As I write this I am waiting for a client from Longreach to call in for his pup. Now the drought has broken out there and dog fences are going up, I expect a few more pups will make their way west. Already there are several in the area, and it will be good to get a couple of nice sires out there. Mick Campbell’s pup by Wilson from Cara is looking promising, so hopefully grows into a very good dog. Lisa Bennett continues to fly the Karmala flag with her Lyndy and I hope Bruce Godfrey’s youngsters turn out well. The cost of freight on top of pup price makes buying dogs an expensive option, but of course the more remote areas are continually being punished with freight adding so much to everything.

Last weekend Emma and Derek Zeimer came down from Bracewell and we had a great morning running some pups and young dogs. There are some videos on Youtube of a couple of nice young bitches, Tash(Riana Cash II x K.Brandy) looks particularly promising. Midnight(ChiefxKahlua) and Poppy(ChiefxClancy)… bred by David Hart…also went well and reminded me of old Karrawarra Ruby. Em and Derek’s house was demolished by the cyclone a couple of years ago and they are yet to move back into it; with the advent of baby Frank last September they moved in with family until it gets completed. Lovely the way their Kelpies show so much respect for Frank, Em said it’s been like that since he was born…. without any commands.

I’ll post a few photos of their dogs below.

From LHS: Midnight, Fizz, Tash, and below….Poppy(b/t) and Bimber(Polo x Fizz)it was her first look. 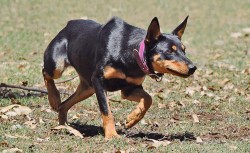 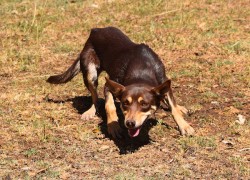 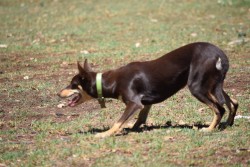 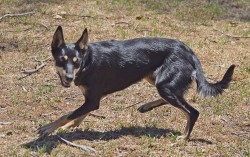 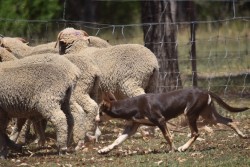 Karmala Vonny has three pups to Jag, a nice small litter for her first…all doing well, being cared for by John Clothier at Christmas Creek Thoroughbreds, Beaudesert.

Mundine, being the smallest pup here at present, continues to amuse. Today he got a tattoo AND a collar, so was a bit put out and went and lay down under the ute! 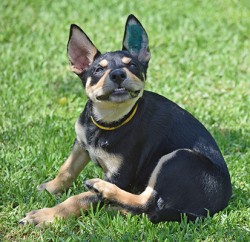 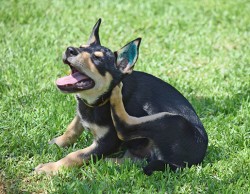 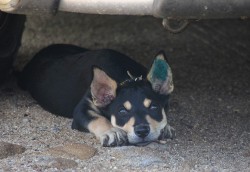 I have a WilsonxCherry  dog pup  that should make a nice, big casting paddock dog, the only pup for sale at present. 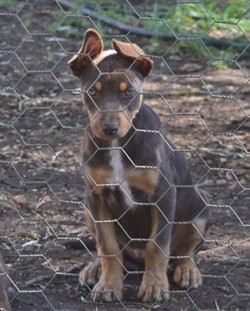 Sad news from Victoria, old Pup, (Riana NapxRiana Delta Dawn), Phil Roche’s good old dog, has gone where all good kelpies end up. As you can see Riana should take the credit, all I did was take Delta down to Nap! I’ll let Phil tell a little more about him: