Well, it doesn’t seem a month since my last update despite February being a miserable, hot, dry month! Still very dry here despite the rest of Queensland getting good rains…or so it seems. We do get wonderful sunsets though! I took the plunge and joined ewes but will have to start feeding them straight away. Just praying we get a bit of the big storms and floods up north. The sheep look well, Merinos thrive on hot dry conditions; I haven’t drenched for a couple of years! The big irrigator in the lower photo has been working overtime watering the beds of pickling onions. The heat has caused all sorts of problems and I’ve noticed more herbicides and fertilisers going on than usual. Richards are one of the very few…if not the only…growers of picklers in Australia.

I have been pretty busy with five litters of pups, 22 in total. The very hot weather is tough on the new ones and I watered the dog cages more than my garden, I think, to cool them off. At least the weaners got a bit of green pick as well! All litters are doing well. I’ve had a couple of new pup runs made in the skillion to my hayshed as I’m tired of bitches jumping out of the pens. These look a bit like a high security prison!

Just the gates to go on and Remy and her pups can try one out; I hate leaving bitches tied up with pups in case one gets tangled up. 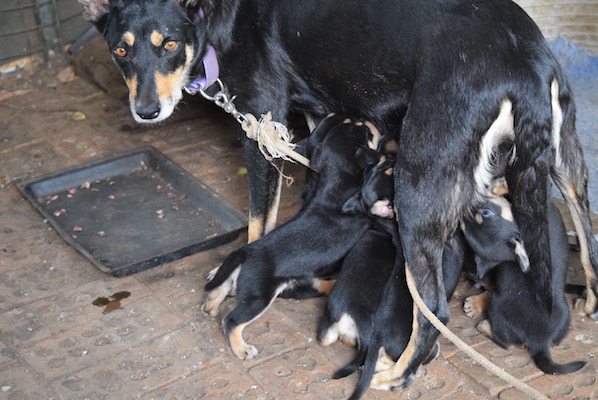 Lily’s been enjoying her three boys:the bottom two were too full to bother. The red/tan pup belongs to Mocha. Meanwhile Mocha’s three are keen to get out! 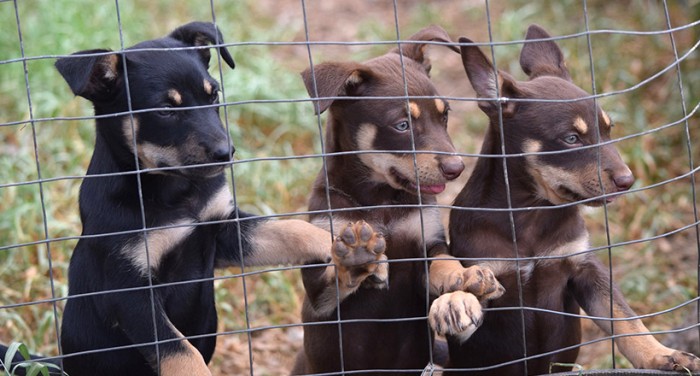 Mocha is what my dad would have called “a cheerful sinner”! She has such a happy disposition that it’s hard to get cross with her, I often find myself laughing at her huge zest for life. Charm/Delta has proven herself a wonderful mum and her four are now getting onto some mince. Here shown full as googs after breakfast….below 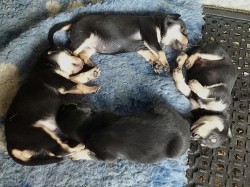 Cherry’s settled down really well and the only time I hear her pups is if she disturbs them jumping back into her kennel. They’re just opening their eyes. 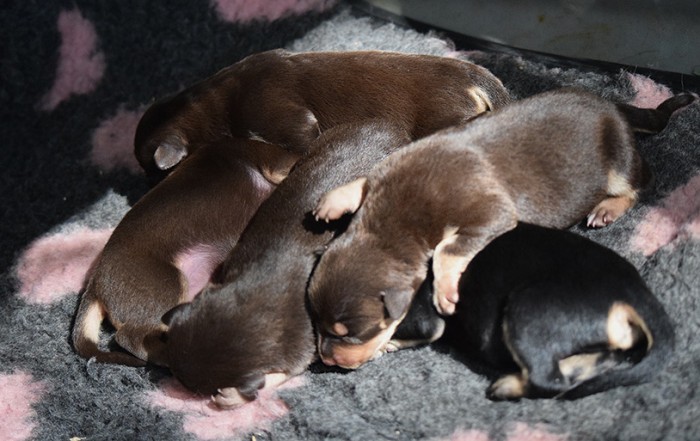 This month Gemma and Fizz are due to whelp, so never a dull moment. There are some dog pups available but most of the present litters are booked up.

Another litter due back here shortly is the Bobby x Cara one at present with Marina at Texas.Lovely pups. 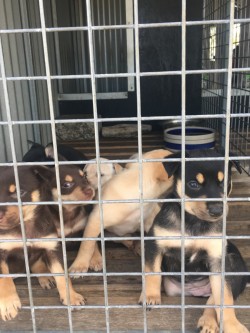 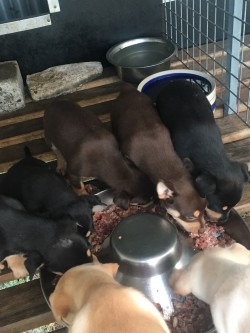 The latest exciting news is Wills being mated to Eventine Roxy, Rodney Garrett’s very good bitch. Wills has slotted right into life with Rodney judging by this photo.  Not sure what his other dogs think of him but I can guess, he’s lucky they’re well behaved! Below is some film Rodney took of Wills bring up some cows for him. 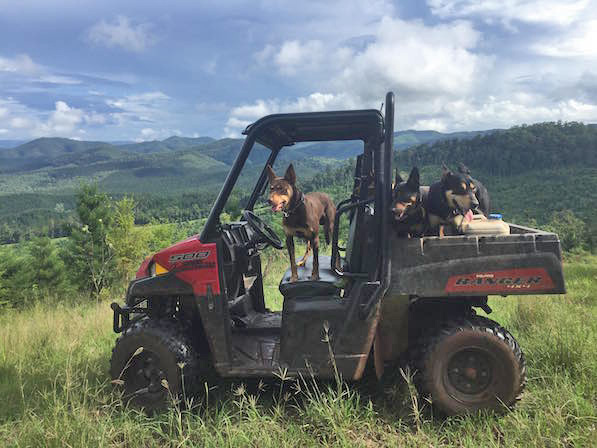 Whitney(Wills x Heli) has been mated to Landy, which should be an interesting litter. I can’t get over how Whit and Brandy are so alike. Here’s Brandy a few years ago and Whit below her.  Some recent matings I’ve done have Brandy at the top of the homoz% .  Tempting to mate Tash to Wills but I’m worried they might all climb like monkeys! This little Remy pup by Spy was practising climbing just for fun one morning….a Brandy G’son! This weekend Nathalie Grimmer came down from Hughenden to pick up Karmala Bobby who will be the latest addition to her Tiree Kelpie stud. Nat has quite a collection of Karmala dogs now…Win, True, Click, Bronx and Laney. Hopefully she will be able to breed some good pups by Bobby and he will save her driving for hours to mate bitches for a bit. His pups from Mocha and Cara look great at this stage. 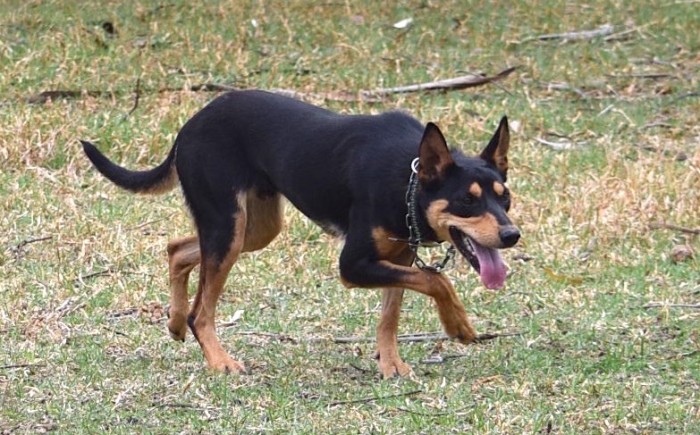 A few years ago I reluctantly sold Cozzie, a very nice blue/tan AkubraxDelta bitch, to Libby Handley. I just received this photo of her with a litter by a Riverdale  dog. 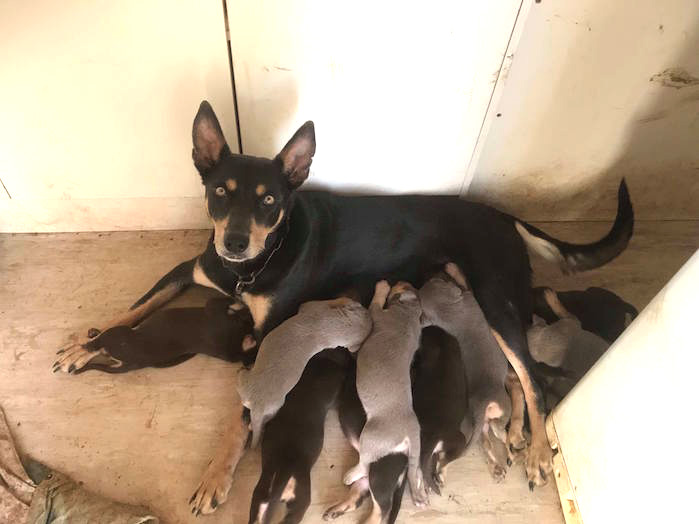 Brandy used to pull back a sliding bolt and let herself out of her pen. This morning I watched her g’daughter QB try to repeat her escape act of the day before. They are the only two I’ve ever had who can work this out. 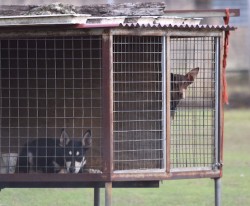 Bridgit(ChangixMocha) has been away with Andrew Martin for a few weeks….she’s the pup in the Outback photo. Great excitement when she got home and greeted Bella, Siggy and Tash(who was tied up after jumping out of my 6″ dog run!). Brigit’s growing into a lovely leggy bitch. 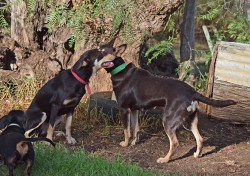