UPDATE! It’s getting rather tricky to ship puppies off to their new homes with all the panic at present. I was lucky to get four away this week to Perth and Melb. despite a few problems…..and very late night driving at the receiving end.

Wishing you all good health, and look after yourselves and others! 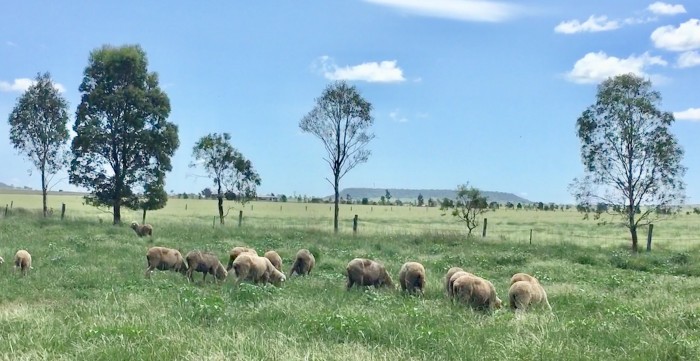 Just look at all that green(and the tiny handful of sheep)! Luckily you can’t see all the weeds or much of the erosion. On the left is where the overflow bypasses my dam and it has washed a whole new topography further along, I’ll have to be very careful when slashing next time. Lovely to have feed at last, and I’m praying this weather system moving down the Centre will bring everyone who has missed out so far a good soaking.

I haven’t shared a story from one of my pup buyers for a long time. I really do miss the updates from Phil Roche. Well, I haven’t asked if I can use this so we’ll keep it nice and anonymous! Hope you enjoy it….

I’ll tell you a quick story about your dog on the weekend … I purchased 70 new breeding stock young poll Herefords 2 weeks ago and settled them into a new paddock but had to come back to my other place for a few days and dropped some dogs off and loaded materials and tools to go back down and resume renovations on the new farm house … I left the dogs as I didn’t need them and had limited room in the truck ,but I had room on the front seat.. so knowing I didn’t need dogs but needed to bond more with your young bitch I threw her in for the ride and a few days together … when I got there I did the rounds and noticed a few cases of pink eye so I had to bring them in that avo so I got some help from my mate/neighbour a retired old stockman and we then started to muster the flighty young cattle into the yards but we had real trouble with a few break away cows causing us grief with the rest of the herd ..
My old neighbour is cursing me for not bringing the half decent dog I had at home down with me … I then told him I had Bobby the young red bitch with me in the truck but I had only had her on sheep with a stop command only and didn’t want her around these crazy young cows yet … anyway 2 hours later and we are getting nowhere on the bikes every time we got the yard corner they would break, so I’ve had it now I tell my neighbour to get off the bike because the dog hasn’t learnt not to chase them yet and he starts laughing and saying “and you think she can hold these cows for us “ haha so I got Bobby off the truck for her first look at cows… she is normally a very strong heading type dog so I was a bit worried but she just found her place on the heel and bit anything that turned her way and we had the cows in the yards in 20 mins … it was like she had done it b4 it was scary so hopefully with a bit more age confidence and love she will be a top dog … my old cocky neighbour sure likes her now … So I wrapped her up in cotton wool and took her home ….haha can’t wait until she is older, stronger, and wiser .. cheers Jan

My first batch of pups for the year are dispersing to their new homes. A bitch pup from True will fly to Japan mid-March, the first time I’ve sent a pup, although a lot of my sheepskin products went there in the past. Karmala Maia will have a nice life with another kelpie doing agility and exploring beaches and snow fields. What a life!

Other pups have gone to Western Australia, South Australia, Victoria and Nth. Queensland. There is more enquiry from small area farmers than usual, and less for real stock work…not surprisingly. I have given some of the bitches that I would usually mate a holiday , and now have to try and find some work for them. One has been spayed and will go to work next week. It’s always worthwhile to ask me about older bitches for a light work situation.

The first three of the big Turbo x Jarrah litter have gone. I have another four big cream pups in one yard and the three bitches and the smaller cream boy in another, trying to assess where they should end up; these pups have all been very friendly and outgoing right through, so should fit in well. 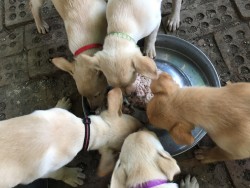 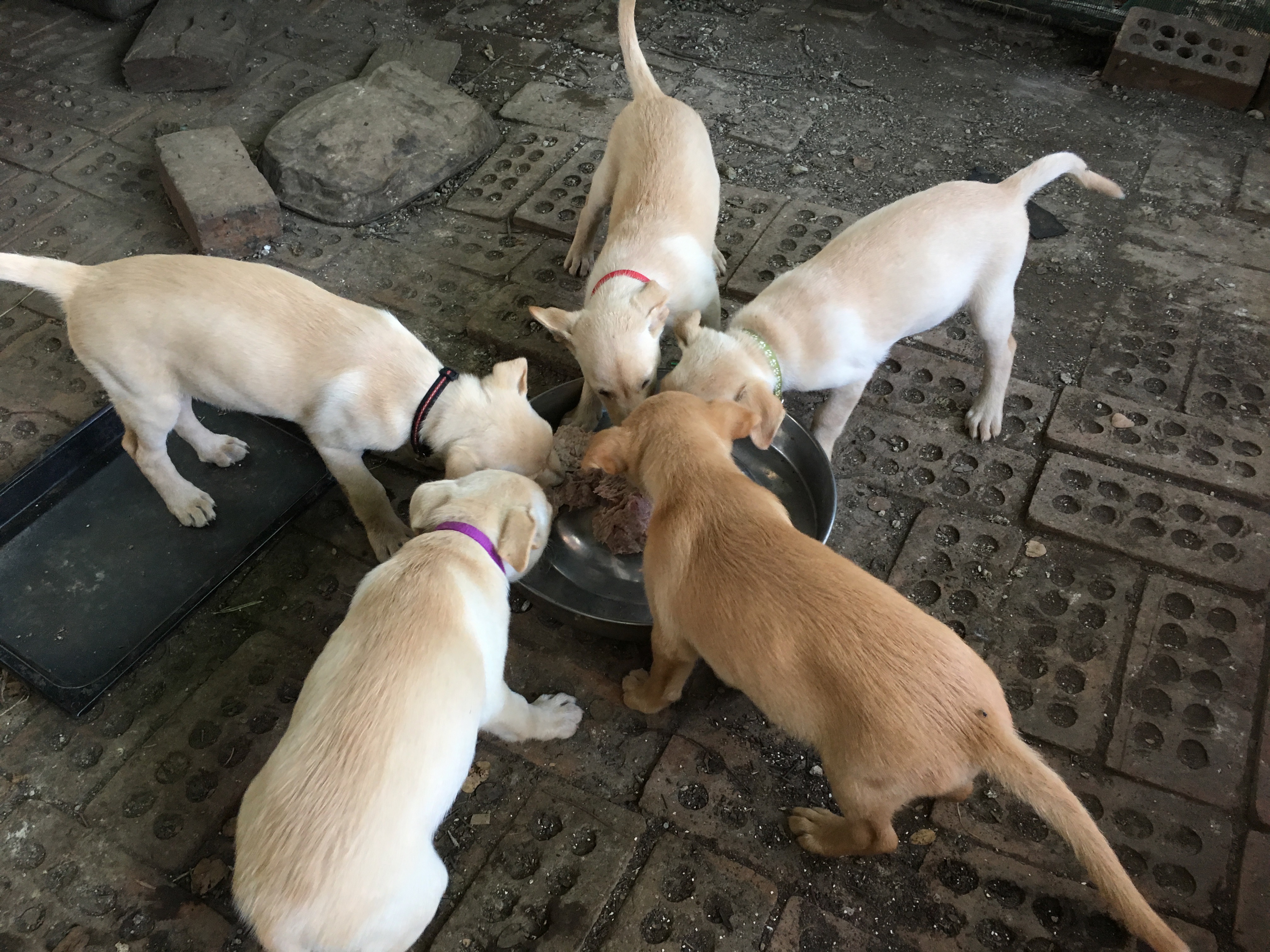 Funny seeing their reaction to the evening “chorus”! Harvey has been starting this every night after he finishes his tea. His sire Finch did exactly the same thing! Perks’ five pups by Harvey have been very easy; a small litter and a young bitch usually makes for less work. They starred in the Brisbane Courier Mail a week ago, real colour in second pics. 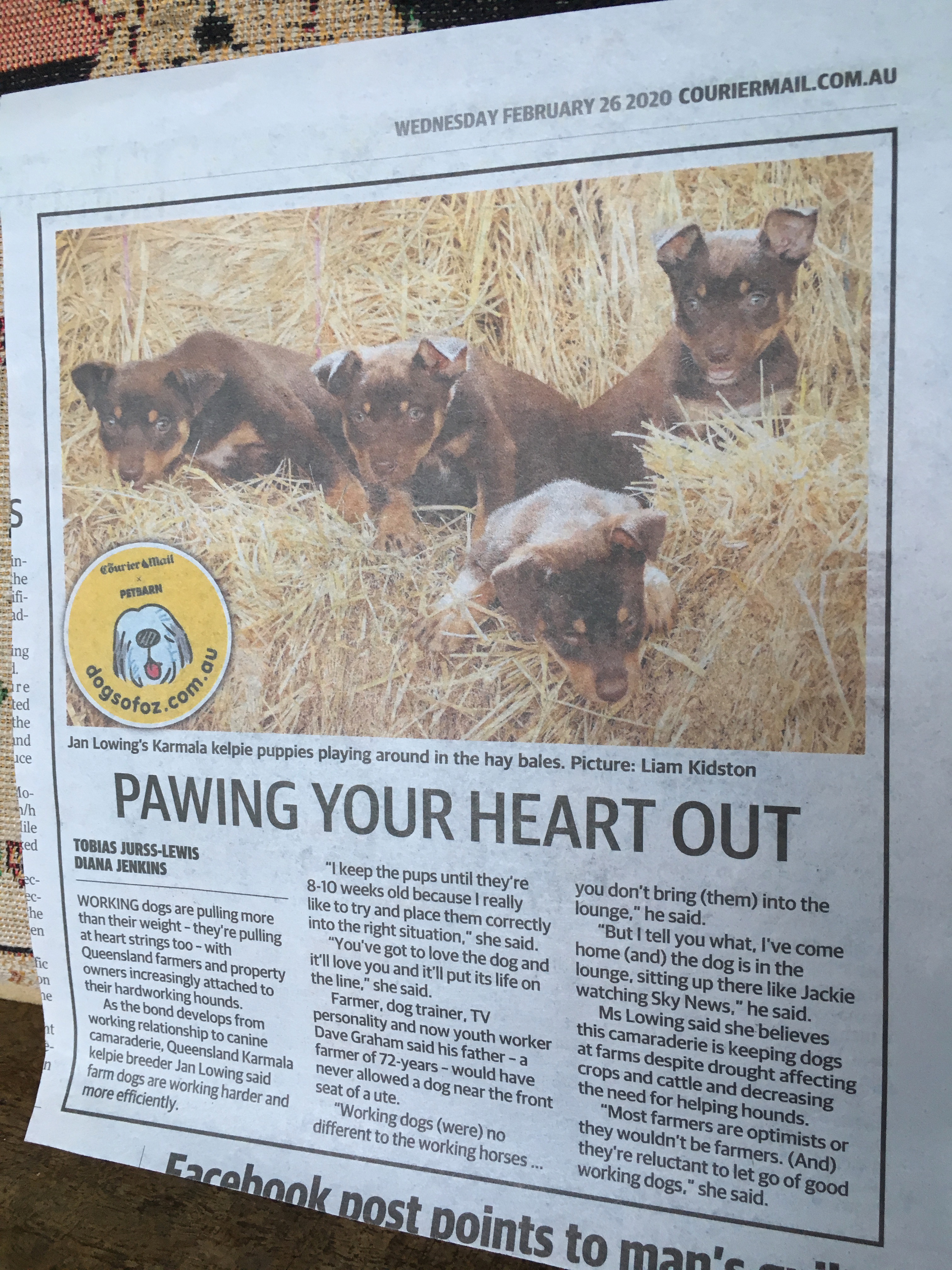 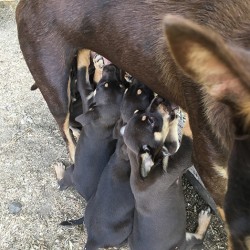 I was thinking while I took these…”last drinks boys…” and Neil Murray’s great song took over….’at Menindee, in the year of 1860…’ The song that told the story of the ill fated Burke and Wills expedition. If you’ve never heard it, Google it! Incidentally, my sire Karmala Wills was named after Tom Wills, a great cricketer who was also instrumental in drawing up the rules for Aussie Rules Football. A tragic figure and the subject of another Neil Murray song.

I  have one little black/tan bitch available, Whip x True. She’s a nice pup, this litter is calm and friendly.Pipi has since gone to an old client in WA. Thanks Mark! 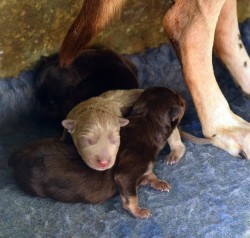 The photos below are of Karmala Luma (VisiQ) who is by Riana Cash II out of Karmala Cadelle. She’s making a name for herself in agility in Austria and will likely improve a lot as she matures; you can see very clearly that her enthusiasm and speed must make her tricky to compete with….she takes off so far from a jump. And Yes! She cleared it! Her owner Tom Baumgartner has given her heaps of other exciting experiences as she grows up and I look forward to my annual calendar from him with his great photos. Another litter was born this week out at Nyngan, NSW. Ron has been keen to repeat the Motley’s Russell x K.Remy mating that produced Skip and she whelped 7 pups yesterday. Skip has left some nice progeny; he’s no oil painting but a very good station type worker who gets on with the job without commands. There were only 2 pups in his litter and the bitch died.

Photo of Skip below.

Below is Karmala Birgitta(Skip x Bimber) who is with Marina down at Texas. We have high hopes for this girl, she started working Marina’s goats recently and looks very nice. It would be great to get a litter by Landy from her, he’s getting on, was born during the Olympic Games 8 years ago. Naka is quite gentle with small pups(if I remind her!). Here with Bingi(Turbo x Jarrah) the first red pup I’ve had; she’s super cute. I had a lovely phone call this morning from a recent pup buyer. I had been a bit worried because Savvy (below) is quite an intense pup, but was super thrilled to hear how well she’s started and how pleased her owner is! 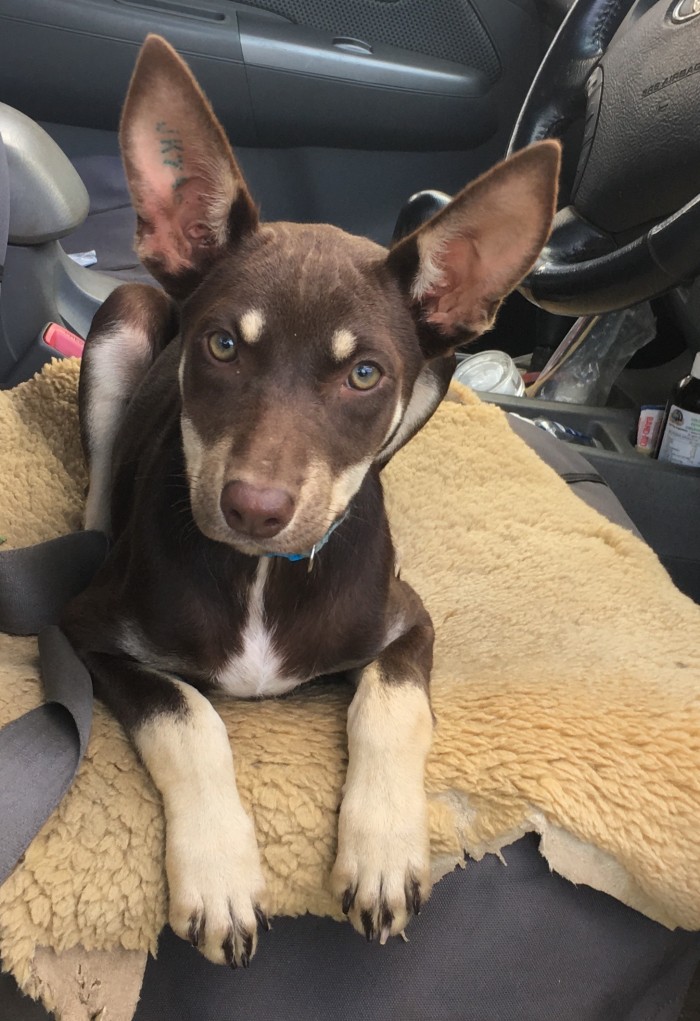 Finally a few shots around the garden, great to see a few flowers again and the birds are nesting.