March 21. I’m just about to go back through my waiting list for pups. If you’re on it, could you flick me an email to confirm you’re still interested please? (and save me a lot of time!) Thanks very much. 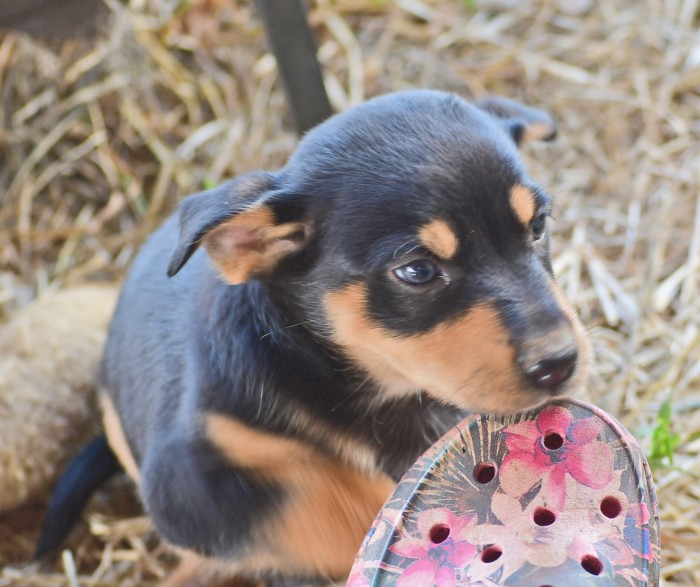 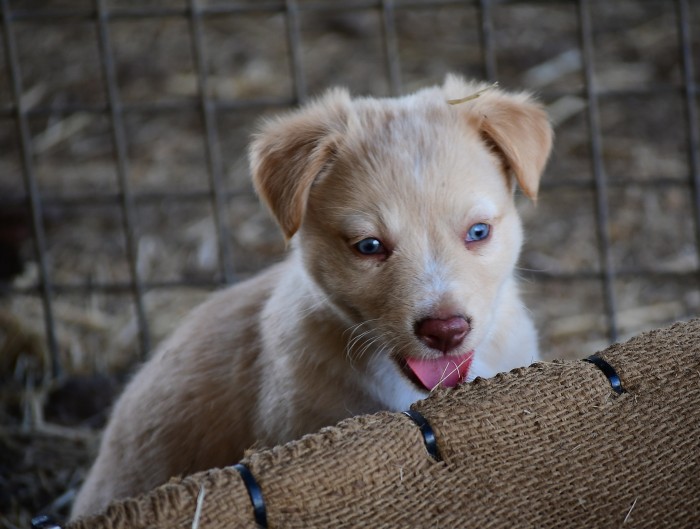 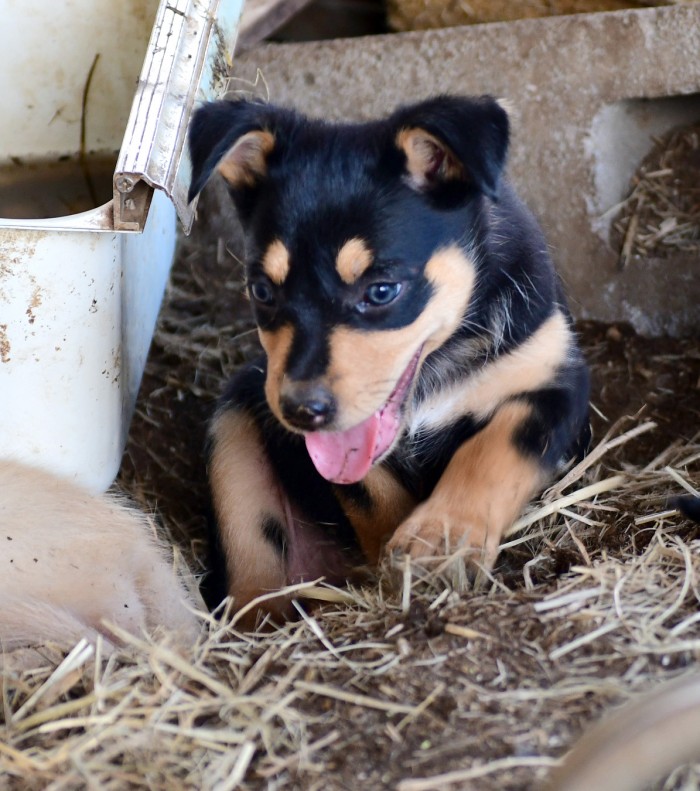 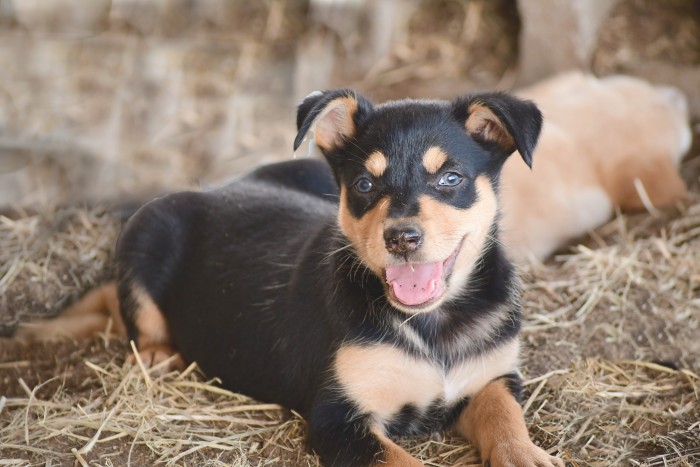 Sorry…this didn’t post on March 1, luckily a regular reader mentioned it. Thanks John!

The first day of autumn, but we’ve had such a cool summer here, it’s just more of the same! Cool but certainly not wet. Very disappointing for the grain growers in this area, who have had a run of dry summers.

It seems obvious from the huge wet in NQ that serious thought should be given to harvesting some of the excess water and diverting it inland for human/stock water,  so many town supplies are in dire straits. I worry about all the meetings local councils are having about future water supplies as they seem to think the solution is to pipe water from elsewhere…which depends on it raining a lot ‘elsewhere’! Which it hasn’t been. The Gold and Sunshine Coasts have had good rains, but it hasn’t come far inland.

I wake every morning to the noise of tankers carting the Clifton sewage down my road, which is a nice way to start the day! This has been going on for about 18 mths at huge expense, fresh water is also being carted in because the town bore and the sewage got a bit too cosy due to ground cracking in the big dry. 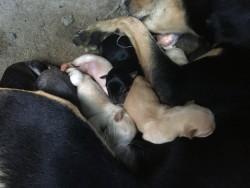 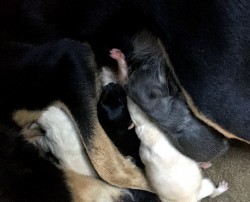 So to dogs! I had a bit more drama than I needed last week with Wiggle succumbing to eclampsia/milk fever. Over twenty five years of breeding pups I’d managed to avoid it, but a combination of factors tipped her over. Firstly, she had nine pups, an awful lot for a small bitch. She hadn’t been eating well for the week before whelping, probably due to her tummy being pressured with all the pups. She continued her fussy eating after they were born, then it got hot and she was distressed by the pups crying. Anyway she had a trip to the vet and was very sick for a few hours. I was assured it would be fine for her to come home as the calcium syrup would control her low levels. Well, the little she was eating was being vomited up again and Marina thought it might be the syrup, as she’d seen it happen before. I’d already bought some You Beaut expensive dog foods so gradually got her interested in eating again. I’ve always known that calcium is best absorbed by dogs from bone meal, and these foods all contain ground bone. She’s fine now, and the pups haven’t missed a beat. (FYI… Ziwi Peak air dried mixes, K9 lamb feast and Big Dog Salmon patties are going down very well.) I should have put her on them sooner, of course. Live and learn. I’m looking forward to Brandy’s AI litter in a couple of weeks. She looks to have a good number of pups, so fingers Xd.

The Brock x Heli litter has done well and I tattooed them and put collars on today. They coped pretty well, little Honey was a bit upset by the whole thing and hid under the golf cart! 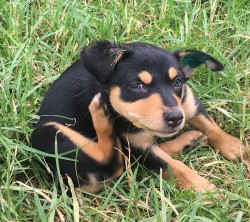 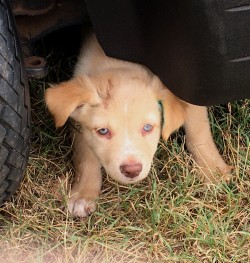 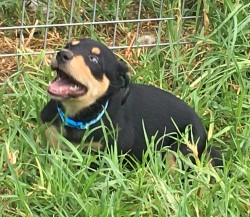 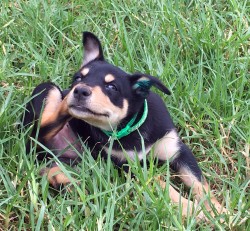 A few different reactions to collars!

Emma and Derek have had trouble with pig dogs getting into their cattle up north. Very distressing and very hard to deal with. Em was excited to see Mina and Mackenzie, her two young WillsxMidnight pups, start very well on cattle. I hope the one I have here, Miley, is as good. Looking forward to seeing how KD and Cash go too. Both are very tough pups, a few knocks won’t worry them.

Exciting news from NSW, Halsted’s Wally has tested negative to CA and I plan to mate Livvy to him when she comes on next. He’s a very nice dog by John’s old favourite Karana TroyII out of a sister to Lily and Gemma. John is highly reliable when he describes a dog and doesn’t make hasty decisions; his dogs only go mustering with him when they’re at least a year old as he does the stock work on horseback and likes the dog well under control before taking it to work with other dogs. Hopefully Karmala Marnus will also make the grade, he looks promising but a difficult summer has delayed his progress into the wider world!

I have been tossing up whether to try an AI litter to Avenpart Wump (Halsted’s Rex x Cotway Dell) after having his son old A.Aspro here. Wump has thrown pups that are very good on cattle, and my main problem is deciding which bitch would suit him best as it’s a very big outcross. I guess the answer is “the one that works most like him”, but hard to guess from photos. Mary very kindy sent me some great photos she had. 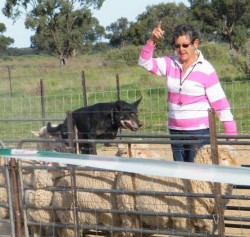 I received a lovely email last week from a lad whose parents had bought him a pup from the LandyxTash litter a few months ago. It would have taken some thought, I doubt his dad had owned a stud bred dog and they would have been anxious to see him work. This is the report….and it’s why I keep my prices down so young people like this can have the pleasure of starting with a good pup. I had so many awful dogs for so long, dad would never have bought me a good pup!

And yes I took my first mob of ewes and lambs out yesterday and he went like a champion never put a foot wrong. Work both sides Dad said not to worry if everything goes pear shape the first time out but it didn’t and Mum and Dad were super impressed with how Clif and I went. Taking lambs out this afternoon so we will see how things go. Clif is my best mate ride the two wheel Ag bike now and has done a lot of fencing with me over the last few months. He is loving work the sheep just what I needed for the paddock he will only get better form here Dad said. Will try send a photo some time. Dad keeps saying he is a really good dog and Mum says she wishes he was hers he is going a lot better than her pup the same age I mean a lot better! I really don’t notice because he is my first dog and he is all ready a big help with the mustering and yarding up, down the lane to the yards we always have heaps of trouble with sheep breaking back and with Clif and I now there is no trouble. I’m afraid all the bitches up north look like coming on heat together again. It was hard work last year, I had 50 pups to feed at one stage! Orders are good so we’ll try to find pups for those who have been patient and waited for one. Hopefully they don’t all have 9 pups like Wiggle. Since I wrote this, Tash and Bim have come down to me…started together but Tash was much quicker ovulating and Bim was mated last Wed. St Pat’s day, to Landy. Tash missed. I think Gossip has missed getting in pup.

Midnight was mated to Wills and Fizz will go to Brock.

True has been mated to Wills again. 60 mls last week and more on the way! This photo taken on my way back from Nobby today.