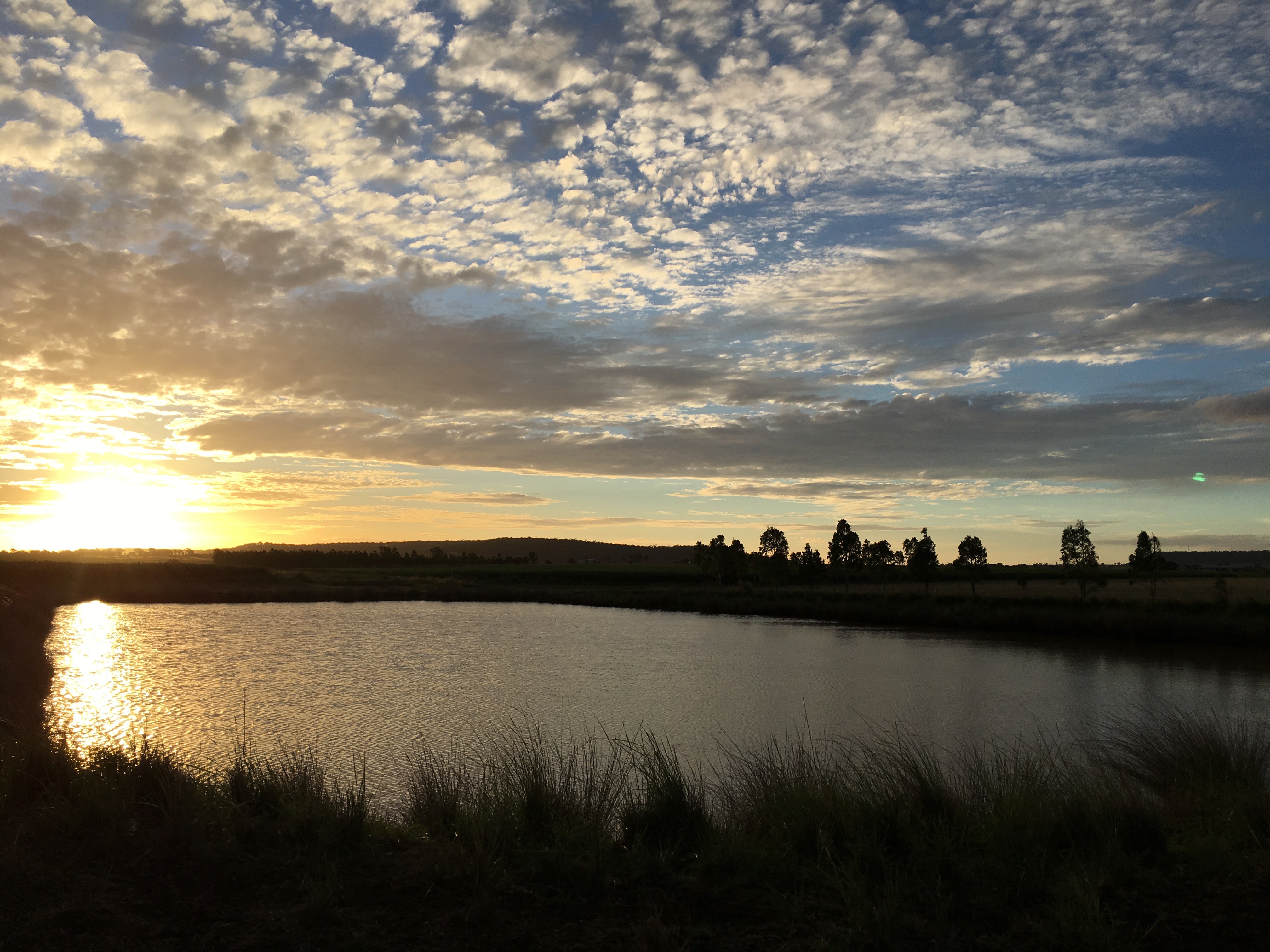 We’re heading into winter with frosts forecast for next Monday. Growth after the rain has been slow due to the paddocks being so bare that a lot ran straight off, and with the shorter days and frosts it looks like being another tough winter for the sheep.

Meanwhile I’m having nightmares with all the bitches on heat from North Queensland to Bathurst to Nyngan and places in between….apparently foxes and dingoes are also busy! I don’t remember it happening like this before, usually it’s only the ones running together that cycle together, no doubt the odd weather has something to do with it. My garden is certainly in a confused state!

So early-mid July looks like being very busy. I will be expecting the following matings to whelp about then:

Karmala Bimber to Karmala Skip, both working out at Nyngan at present.

Milburn Moss to Wills, the only on the spot one!

Karmala Wiggle to Landy. I had a trip to Texas for this one, heaps of roos to dodge coming home!

Karmala Gemma to Wills. A drive to Caboolture to meet his ride North.

Karmala Remy to Glendon Max, who luckily lives quite locally.

Karmala Tash to Antree Ray(Hull’s MickxBamba Ginny). Chris Egan has been looking after Tash down near Bathurst until she was ready as she had a false alarm. Thanks very much Chris.

Karmala Heli to Karmala Changi(K.Chance x K.Brandy) Both down in NSW. 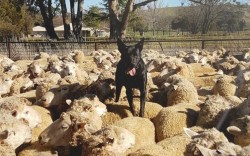 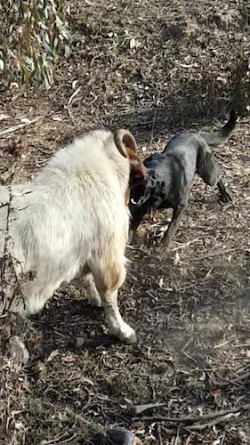 It looks pretty scary from here!! I’m reluctant to put my breeding programme on hold but also wary of the poor season/drought in many areas. Just have to hope for good winter rains. Meantime dogs grow older and accidents happen far too often, sadly, and these dogs need replacing. Often people leave it too late to get a young dog going to help out an old favourite and are left with a gap in the team with only young pups available to fill it.

Just recently I heard of two dogs in the same team coming to grief within a week; a young dog I sold last year was borrowed to fill the gap and I was asked if I had anything a bit older to help him out. I was loading a young bitch into the ute to meet up with a ride out west for her when I noticed she was just starting to come on heat!! So that plan was put on hold for a later ride.

This brings me to the craze for people wanting bitch pups….I always ran a team of bitches myself, and can appreciate the plusses, but be aware that you probably need to keep an extra couple of  bitches to allow for this happening if you’re working with others who have dogs in their team. Then there’s the situation I heard of this week when a certain job requires certain dogs and there’s a bitch on heat so you take a punt that she’ll be right….and she ends up mated when you’d planned on using another sire. Just a bit o food for thought.

Meanwhile the pups already on the ground are a delight. The Max x Poppy pups  are about as nice a pair of pups I’ve seen, no doubt partly due to the small litter and Pops’ excellent care. Pic. below. 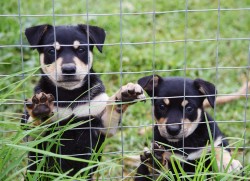 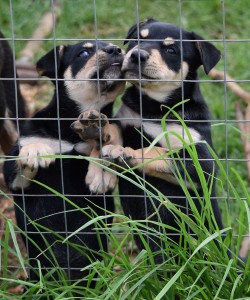 Whitney has five beautiful boys by Wills, only one of which is booked…they’re just 3 weeks old and last night they crawled out to the front of the kennel and demanded Whitney’s tea. I gave them their first feed of mince and they cleaned up the dish! It makes breeding easy when the pups are so healthy and friendly. Pic. below, on their way to a big yard. A couple are definitely sire material…see previous litter photos and video below. 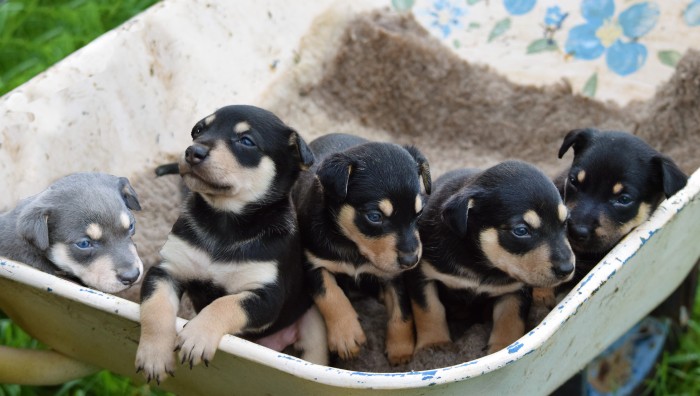 Wings has her 4 next door and is doing a great job too, their eyes are just opening. She loves getting out and doing a run around the other kennels with her tail up between her ears making faces and creating havoc!

Other older pups are Lila(Wills x Lily), Queet(Wills x Quiz) and Rose(K.BossxAlderside Ruby). Eventine Grace(Wills x E.Lolli who is x Landy) is going up the Charles Williams at Riverside, Moranbah. He has her brother King and is very happy with him. Queet(Wills x Quiz) has learned to bark on command! 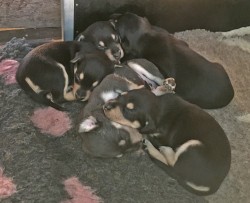 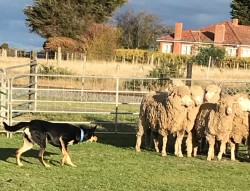 This is the bitch I kept, Livvy, sister to the boys above. There are other newer videos of her on Youtube. Wills waiting for his ride at Caboolture. 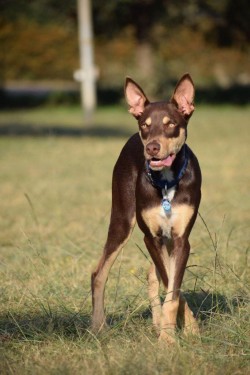 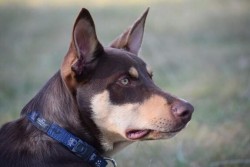 Karmala Lucy has been helping out on this dairy farm in NZ for a few years now. Here the cows are starting to go home for milking. What a difference a week makes!! Daisy the dachshund has five fat puppies! Available for sale.

This last week Toowoomba has hosted a huge gathering of Rolls Royces from around Australia, the 61st Federal Rally of Rolls Royce owners. A few photos. What wonderful cars. And a stunning sunset to finish up!