Well, we’ve had an exceptionally mild winter with only a few frosts and it’s very dusty and dry here….so warm tonight that we could get a bit of rain tomorrow…. I certainly hope so. The ewes and lambs have been getting lucerne in the big dog run at night and it’s more like a sheep yard than a dog run! 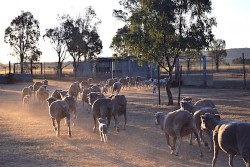 My son, who designed my website, is at present between jobs and asked me to let you all know he’s available for website work at present. I was asked recently who did this one but have forgotten who it was!

The latest litter from Vie(LandyxRiana Trixie) by Wills is doing really well. Vie has excelled herself, producing six bitch pups in a litter of seven! Vie (“FlyBy”) is a real character and was still doing airborne 360’s at feed time the day before she whelped; her last litter by Hardy has turned out really well and I’m hoping Wills will have a similar sobering influence! 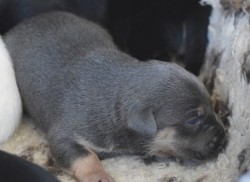 Most of the Mocha, Fizz  and Gemma pups are gone, I have kept a bitch pup from each litter to run on as I usually do. It’s been great meeting some of the new owners and renewing acquaintance with some repeat buyers and hearing how their dogs are going. I find it really interesting to hear about the dogs that have worked on their properties in the past, the dogs that belonged to the present fellows’ fathers and grandfathers. I had a long chat with one chap who said his father’s dogs would have to be some of the ugliest kelpies he’s seen, but his dad swears by them…well, if they do the job why worry about cosmetics! 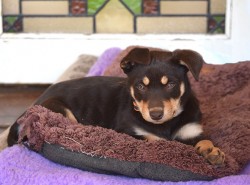 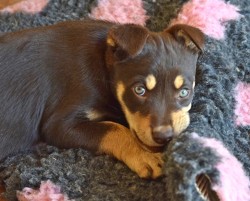 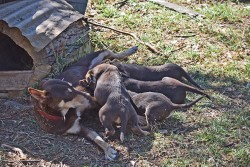 I met Em at Woolooga to swap Fizz and Wills after she’d weaned her pups. Frank is good mates with Will but was delighted to see his best friend back again. Em said she hadn’t realised how good Fizz is at settling and minding him. Em had previously come down to visit and taken Bimber and Poppy(ChopperxPeggysue) home to try on cattle. Poppy’s had trouble with a back injury and Em’s favourite chiropractor Heidi is treating her. 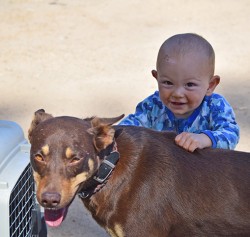 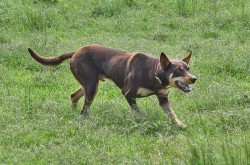 Wills has been busy since getting home, first mating Grant Hutching’s nice young bitch Honey(K.Neon x Tracker Gillette) and then K.Treat( Whitehead’s TrackerxK.Tilly)…. he then visited the AI centre at Laidley for collection. I had an order for semen from Wills  to go to America, and the Akubra semen already stored is going too. I’m very lucky to have an internationally accredited facility close to me, and I also put 4 pellets down for myself. Heli came on heat shortly afterwards, so Wills had a big couple of weeks.

Lots of driving lately, I also did a day trip down to Narrabri to meet Ronnie Robb and collect Wings and Tash(R.Cash II x K.Brandy) who’s well in pup to Karmala Skip(Motley’s Russell x Karmala Remy). This litter is pretty special as Tash’s sire, Riana Cash II had to be put down last week after an unfortunate accident while working. Cash was  an exceptionally intelligent dog and left some very good pups, Marina and Bob are very upset at losing him far too soon. Cara is my other bitch by Cash. Ron worked both bitches and liked both of them, preferring Tash to Wings. It’s great that I have the chance to try out future stud dogs and bitches on big mobs of sheep (with Ron) and also on cattle with Em and Derek. It’s absolutely essential to get good feedback before deciding to breed them. Em reports that Bimber( PoloxFizz) is doing very well on their cattle. Her full brother Bobby is still working with Em and Derek and keeps improving, I’m tempted to keep him as I lost my other bitch by Chopper, Maggie, and want to keep his influence through Polo, also dec. Too many good kelpies die far too young. I often wonder how good the breed would be if only the lesser ones had died!

I had a shock when I received a message on Facebook from Phil Roche’s daughter Sarah, telling me her dad died in June. Those of you who are regular readers of this blog will have enjoyed the excerpts from his emails that I took the liberty of printing. I enjoyed his insight into his dogs and his clever way with words so much, it seemed selfish to keep them to myself. Although I sold him the first pup many years ago now, I didn’t know anything about his past and found the obituary published in The Age really fascinating. You might enjoy reading it too. I will really miss him.

In his last and happiest years Phil Roche was a shepherd. But in the 1960s he was a teenage Beatle fan in the industrial north of England, dressing fashionably and forever having his hair done. He had no vision of himself in Australia, much less on a Western District sheep farm with his beloved dogs.

Born on April 20, 1950 Philip John Roche was one of five sons of Cambridge-educated parents. At the age of seven he was sent to boarding school in the Lake District – cold baths in the mornings and invigorating walks in the snow and sleet.

Phil thrived on sport, which was played every day, excelling at soccer and cricket, but had little interest in the academic side of things. He still passed the entrance exam for the local grammar school, where he played rugby in the 1st XV, cricket in the 1st XI and maintained his lack of interest in academia unless he had a special bond with a teacher.

The family emigrated to Colac in 1968. Phil was 18 and had just finished school. He did not want to come to Australia – he had a girlfriend and a busy social and sporting life.

He spent his first months in Australia working on a farm near Derrinallum before going to Longerenong Agricultural College (LAC) near Horsham. His accent wasn’t the only thing about to change. It was clear to his fellow students, many of whom became lifelong friends, that “The Pom” was angry and unhappy, struggling with the incessant heat, the flies and the isolation. His heart was in England.

He was an easy target but they found him to be tough and resilient; and an accomplished athlete. He played for the LAC cricket XI as a wicketkeeper-batsman, and represented Horsham District Cricket Association at Country Week. Soccer and rugby not being an option, he tried Aussie Rules, and ended up playing on the wing in an outstanding LAC football team that won premierships in 1970 and 1971.

Phil’s was always a broad church. He followed Leeds United in the halcyon days, loved an Ashes series and appreciated Alastair Cook, also a cricketer and a sheep farmer, who once observed that “sheep and dogs don’t talk to me about cricket”.

Phil became a blind follower of the Pies and thus regularly abused umpires at the MCG. He was a rugby union devotee, but after meeting Cameron Smith he also tolerated rugby league. He maintained that if Cameron Smith were Prime Minister with Barrie Cassidy his deputy, the country would be in safe hands.

When it came to the domestic front Phil chose to be clueless, but he applied himself assiduously to his work, and prided himself on leaving each property he farmed in a better condition than when he arrived. In 1977 he and Lesley took up their own dairy farm at Tandarook near Cobden, but his passion was sheep, perhaps stemming from the time he spent on sheep farms in the Yorkshire Dales as a child.

He tried combining trade teaching at Cobden Technical School with a small sheep farm, before moving to a larger sheep property at Leslie Manor, near Camperdown. Sheep farming allowed him to play A Grade cricket into his mid-40s. The pleasure of those years winning premierships with “the Cobden boys” was matched only by the contentment he found later as a shepherd.

In 1994, on the back of the wool crisis, he turned his hand to running a newsagency in Horsham, after which he “retired” to Indented Head to follow his next dream: building a couta boat with a view to ecotourism on Port Phillip Bay. Unfortunately spinal surgery meant he could not manage the couta boat. He was heartbroken, but never being one to take a backward step or sit still, he reinvented himself as a shepherd.

The sometimes solitary nature of his work gave him time to read, listen and reflect on his many interests.

In his own considered and painstaking way, Phil researched sheepdogs thoroughly. He bought dogs from Queensland with the best breeding for his purpose. He went to sheep dog trials near Dargo and a workshop at Sale led by James McGee, an Irishman who had won two World Sheep Dog Trials with his dog Becca.

In 2014, the day that gave Phil the most pleasure on a trip back home was the one he spent with James McGee on his County Donegal farm, mustering and drenching ewes with Becca’s offspring Silver, who soon afterwards was awarded International Supreme Champion. Phil described his day as “… like your very average club cricketer having an eight-hour master class with Shane Warne. Except I doubt Warney would have served up cheese sandwiches dipped in hot tea for lunch.”

Phil’s new life revolved around his beloved dogs and his shepherd’s work at Wingiel, the former Ardno stud property near Inverleigh owned by the late Clive McEachern and his wife Kate. The sometimes solitary nature of his work gave him time to read, listen and reflect on his many interests.

He may not have enjoyed the academic side of school, but he had a way with words. His speeches at the weddings of his daughters were memorable. When congratulated, he wrote: “I have a lot of time to think these days. One of the advantages of being a shepherd, lots of watching flocks etc. even if not at night.”

He read widely – biographies and autobiographies, the Age obituaries (particularly of war veterans), about World War I, and especially about his hero, General Sir John Monash. “Remarkable man,” Phil wrote. “Staggers me what some people achieve from humble beginnings.” He admired Monash’s bridge-building, including the Fyansford bridge that he passed on his way to work.

On June 16 Phil went to work at Wingiel feeling fine. Mid-morning he fell ill. He tried to drive himself back to Geelong Hospital, but only reached Monash’s bridge at Fyansford. He died that evening from meningococcal disease.

He leaves his wife Lesley, daughters Jennie, Sara and Rachel, seven and two-thirds grandchildren and no one to work his dogs. Typically he left explicit instructions: “In the event you need to decide on the future of my dogs … spread the ashes in the top lambing plain at Wingiel. They are as fond of each other as they are me, I know they would be traumatised by being split up.”

The appreciative McEachern family plans to erect a memorial in Phil’s honour at Wingiel “to a wonderful shepherd”.