Spring has arrived with a vengeance! Nice rain and lots of lovely, healthy puppies all growing as fast as the weeds in my garden! I started feeding Lily’s pups(by Brock) at just under three weeks and moved them yesterday to a larger area which they immediately started exploring; they seem to be more advanced for their age than usual. Lil has five bitch pups and two dogs. 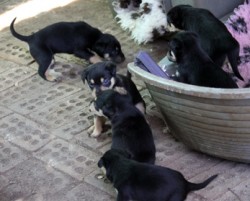 Cadelle is a very conscientious mother and does a great job with her pups, she’s very protective when they’re little which can lead to a few arguments. This is the first litter I’ve had by Riana Cash II and they are very contented, quiet pups….also due to being well fed, but I do notice some litters are noisier than others. Six bitches, two dogs. 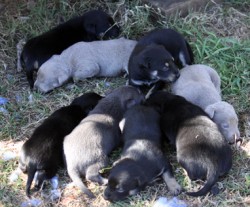 Brandy has four nice red/tans, one girl. She toughens them up during the first few days…I went out three days after they were born and she must have got a bit hot in her nice new bed overnight. She’d picked them all up and dumped them on an old chaff bag! Three dogs, one bitch.

Kahlua is also doing a great job with her litter by Tracker the Chief which was born a bit before Lily’s. I’m waiting for a photo from Derek…Emma’s finishing her electrician apprenticeship in Brisbane.

In non puppy news, I had a visit from Rodney Garrett in August on his way to the Cattledog Trial at Pittsworth. He had Tracker Spy, Halsted’s Beezneez, Jessarene Cara, Eventine Roxie and Tracker Whiskey with him, all working very well. We gave all my pups a run and had a very enjoyable few hours. Rodney ran fifth with Spy; he is running consistent scores with Spy and Roxie well into the 90s and impressing the Collie owners.

Wayne Squire rang with news of his Landy ‘pups’ and also filled me in on the missing link in Chopper’s pedigree. Thanks Wayne! It turns out that Fitzpatrick’s Bea was out of a registered bitch called Ritchie’s Flirt.

Very sadly had to put Chanel down. She was doing brilliantly up to ten days before whelping, but went down very quickly. She has always had very big litters which could be the problem…in conjunction with her bad leg. Lots of stress. She was a lovely bitch.